The Cat Welfare Society hopes to raise awareness of animal abuse and abandonment in Singapore. The two-month-old kitten, Oryon, was found in a carpark with most of its left hind leg severed.

Singapore’s Cat Welfare Society said 8,000 cats were culled here in 2009, a more than 20 percent drop from the 10,000 to 12,000 that were culled annually in previous years. The official figure for 2010 has yet to be released by authorities.

President of the society, Fareena Omar, said the problem of impulsive buying needs to stop for the numbers to go down further.

“A pet is a lifelong commitment, not just for Christmas holidays or for New Year,” she said.

She was speaking on the sidelines of an adoption drive the CWS was organizing in collaboration with global pet food company, Hill’s Pet Nutrition, in Pasir Ris last Saturday.

“Buying is not the solution,” she said. “Once the buying stops, the problem of unethical breeding will also be reduced.”

Unethical breeding happens when pet breeders cause suffering to the animals, for example, keeping them in poor, overcrowded conditions or ill-treating the parents of the new-borns.

The CWS promotes the adoption of cats, but if one must buy, Omar said future pet owners should at least ask to see where the shop gets its stock from. “You’ll know something is wrong if the breeder is unable to be transparent with you,” she said

Another cause for concern was irresponsible cat feeding. “Cat feeders should clean up after feeding stray or community cats,” she said. “Residents often feed these cats leftover food and that attracts pests, which makes people complain.”

The CWS, which advocates tolerance of community cats, gets about 30 calls a month by town councils to help mediate and manage these complaints.

“Some people just don’t like cats in their neighborhood,” said Omar.

To help manage the stray cat population here in a humane way, the CWS offers subsidies of S$20 for every cat that its over 400 members bring for sterilization. Last year, 3,129 were sterilized under its stray cat sterilization program, 20 percent more than in 2009. The CWS aims to sterilize 4,000 cats this year.

A few of its more active members claim up to S$1,500 a month through the program, which works out to 900 cats sterilized a year each for these extra committed community cat caregivers.

It is also trying to get the Stray Cat Rehabilitation Scheme, a sterilization program by the authorities terminated in 2003, reinstated.

MORE TO BE DONE

But more needs to be done, as many cats are still abandoned or abused.

One of the most recent cases of this was a family in Tampines which hoarded more than 30 cats in their four-room flat. The CWS was tipped off after a member of the public spotted the family’s younger son abandoning a cat.

CWS found the rest of the cats in a bad condition and underfed during its rescue operation.
Cats are not allowed to be kept in HDB flats, and the family had shut their windows and doors for five years after neighbors complained about them to the authorities.

Some abused cats are rescued and put up for adoption on the society’s website.

Omar said about 20 to 50 cats are put up for adoption each week by the public through this platform, but only one out of two gets adopted. The society also holds about six adoption drives each year to help find homes for these cats. It would like to do more, but needs sponsors like Hill’s, which was giving away a month’s worth of free cat food to those who adopted the cats at the two-day drive which ended Sunday, March 27. 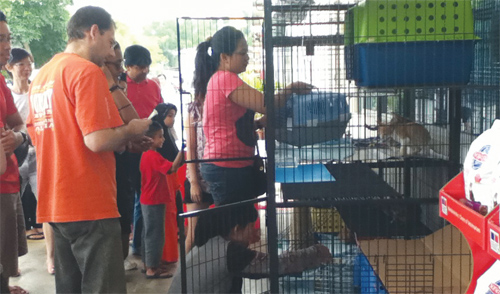 The Cat Welfare Society says pet abandonment is still a big issue and abuse by children is on the rise. PHOTOS: Daphne Tan

Only five people showed interest in adopting some of the 12 cats at the drive. One of those getting a new home was one-year-old Merbie, a marble tabby adopted by 25-year-old April Zara Chua.

Other cats, like two-month-old ginger-white Oryon, are still looking for a home. Oryon was found next to a motorcycle in Eunos with one of its hind legs severed. Omar said the cause of the kitten’s missing leg is unknown, but she is not ruling out animal abuse.

She said the problem of animal abuse by children and teenagers between the ages of nine and 19 was on the rise. Members of the public had reported cases where secondary school kids had bashed a cat to death, and even children cutting off the tail of a neighborhood cat.

With the rise of the Internet and social media, more of these cases are now reported on Facebook, blogs and citizen journalism sites. “People need to understand that animals are also sentient beings,” she said. “They feel pain, hunger, sadness and loneliness.”

“Education starts from the home, parents can’t wait till SPCA (Society for the Prevention of Cruelty to Animals) comes to their children’s schools to give talks,” she added.

According to the Agri-food and Veterinary Authority (AVA), animal abusers can be fined up to S$10,000 or jailed up to 12 months, or both, if convicted. Merbie, with new owner April Zara Chua, is one of five cats getting a new home. Seven others are still waiting to be adopted after last weekend’s adoption drive. PHOTO: Charlie Tan

But it may take a while for the two cats to get acquainted as cats are territorial creatures and do not like change.
Chua recounted the story of how Missy got upset when it was placed for two weeks in a pet hotel while she went on holiday. When she returned, she found Missy was significantly thinner.

“Missy is not an expressive cat, but when I came back, she was meowing at me and snuggling up to me as if she missed me badly,” she said.

So for now, Chua will keep Merbie in a separate room, till she is sure Missy has “accepted” the new cat. She said she will know this has happened when the two cats snuggle up to each other and no longer display hostile behavior such as hissing.

Meanwhile, she will rub Merbie’s scent onto household items using a sock, to “introduce” Missy to the new cat.