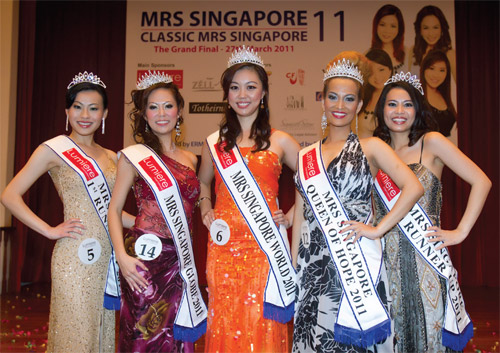 The winners of this year’s Mrs Singapore Pageant.

It was a night of courage and charity, as 30 beautiful wives, mothers and grandmothers competed in the Mrs Singapore and Classic Mrs Singapore Pageant Grand Finals 2011 at the prestigious Orchid Country Club Grand Ballroom on March 27. The competition was presented by ERM World Marketing, with proceeds from the sale of the tickets donated to HOPE Community Services Centre.

The big winner of the night, Vanessa Tan, was crowned Mrs Singapore World 2011 as well as Mrs Community Ambassador, Mrs Zell-V Ambassador and Mrs Photogenic, while Foo Yan Ming emerged as Classic Mrs Singapore 2011 and 2nd runner-up in the Talent Round.

First-time Mrs Singapore pageant judge and Channel 5’s Point Of Entry TV star, Jourdan Lee, noted that the contestants were very talented. Indicating that the major portion of the judging criteria was based on the way they answered their questions, Lee disclosed that he felt Tan had “a lot of heart” in desiring to make an impact in the community.

Tan explains, “Winning the pageant is like a dream come true for me and definitely a milestone for me this year. The other contestants look very good, are well-educated and spoke really well; I wasn’t really confident that I would stand out but I just went ahead and did my best.”

A philanthropist in the making, Tan shared, “In my five-year plan, I hope to be able to start a social enterprise. Right now I am in talks with the Ministry of Community Development, Youth and Sports to set up something concrete to help abused children, and also to educate Singaporeans that this is a very real yet under-reported issue in Singapore.” The question-and-answer segment challenged the contestants on topics such as choosing between success, fame and wealth, agreeing to the practice of surrogacy, the challenges of motherhood and more.

Cheered on by family members, friends and colleagues armed with billboards, horns and whistles, the contestants began the evening with an elegant dance item led by Mrs Singapore World 2010 Kenny Santika. Next came the talent segment whereby the Classic Mrs Singapore contestants showcased their skills—bold was the word to describe the performances, as the women, aged between 42 and 65, sang, danced, played music and even performed yoga and sewed handicraft onstage.

Second runner up, Sheela Andrew shared a moving account of how she struggled with depression two years ago caused by the sudden death of her 26-year-old daughter. Surmounting tremendous odds, the diabetic patient hopes to use her testimony to encourage others who have gone through similar sufferings to be courageous in facing the hardships of life.

The pageant came to a close as the title holders from the previous year came forward to crown the pageant winners of 2011. Queen of Hope 2010 Yuan Wenling crowned the first and second runners-up of Mrs Singapore World, Cara Wee and Nur Afni, as well as Queen of Hope 2011 Nimfa Tingala Su. Tan Wei Young, the husband of Mrs Singapore World 2011 Vanessa Tan had the honor of placing the crown on his wife’s head. All were winners that night, demonstrating great courage in stepping on stage to perform and more importantly, to champion their charitable causes.