A Lesson In Overcoming Fear

A rejected blood donor reports from the sidelines at the recent blood donation drive. The theme of the recent blood donation drive was Pirates Of The Caribbean.

They say rejection is a painful thing. But the rejection doled out by the doctor at a blood donation drive had more of a bittersweet feel. After mustering up the courage to overcome my fear of needles while doing good at the same time, I was unfortunately turned away at the City Harvest Community Services Association’s blood donation drive held on March 6 and 7.

I did not know whether to feel relieved or disappointed. On one hand, I would not need to go through the ordeal of having a needle in my arm; yet on the other hand, I was missing out on an experience that everyone should have at some point in their life.

In any case, I decided to stick around *SCAPE at Orchard Link, where the first of CHCSA’s blood donation drive for the year 2011 was being held. With plans to hold 12 drives throughout the year, the association is targeting a total of 1,200 donors for 2011.

My fear of needles goes all the way back to when I received my BCG vaccination in primary six. It was quite the ordeal for a 12-year-old like me. Yet, assured Irene Ho of CHCSA who helms the blood donation drives, “It’s only as ‘painful’ as an ant bite; you may not even feel it.”

I felt faint, but bravely, decided to walk through the process of giving blood.

You start out by filling in a questionnaire designed by the Singapore Red Cross Society which determines if you are suitable to donate blood. According to the SRCS website, the following individuals may not be suitable to donate blood—persons infected with Hepatitis B & C; persons infected with HIV or are at risk of getting HIV; persons with a history of drug abuse; those with chronic illnesses requiring medications such as hypertension, heart, lungs, kidney disease, diabetes, epilepsy, etc.; expectant and breastfeeding women; women who are menstruating.

Once you’ve filled up the questionnaire, you can then head over to the counter to register with the Health Sciences Authority nurses who will promptly send you to the doctor for a medical screening.

This was where I got rejected. Aside from what SRCS has listed, apparently if you had fallen sick less than a week ago, you can’t give blood. Not only that, you have to be over 45kg and not have gone for any surgery in the past three months (this includes wisdom teeth extraction). Since I was officially off the donor list this time, I sat longer with the doctor to learn more about the blood donating process.

“Blood donation is a civilized form of bloodletting,” explained the doctor from HSA. Bloodletting is an ancient medical practice of withdrawing considerable quantities of blood from a patient to cure or prevent illness and disease. You can imagine the pretty picture he painted. “It’s actually beneficial to donors as well.” 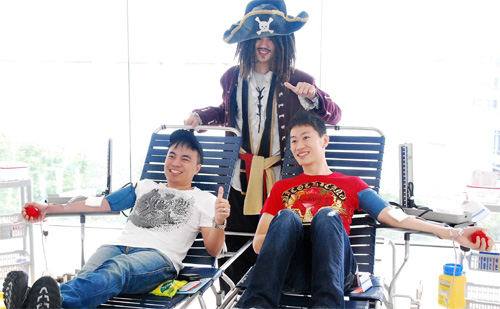 Hard to believe but true, Ho explained that blood donation “helps to generate new blood. And when new blood is generated it helps your whole body to feel more alive again.”

It turned out, Jeremey Jeevan, 17, a Republic Polytechnic student was also afraid of needles. But he was a lot braver than I was. “I was very scared at first, because I’m terrified of needles and blood,” he confessed as he sat on a cot giving blood. “I thought it would be painful, but actually it’s not!

“It’s good to conquer our fears!” he added cheerfully.

Jeevan, who at 17, needed the consent of his parents to donate blood, had come down with his friend to donate blood together for the very first time. “I was surprised at the fact that it was quite simple and that it didn’t hurt. It may look quite menacing when you see them taking out all the tubes and equipment but the nurse reassured me and it turned out to be fine.”

I watched as another donor sat down to his turn. The nurse swabbed his arm with a cleaning agent before pulling out a tiny needle full of anesthesia, to help numb his arm, then she pulled out a 16-gauge needle that sent blood into the 450ml packet that could save three lives.

“Does it hurt?” I asked. “No,” came the quick response which proved to me that donating blood really didn’t hurt at all. It was a simple process that took less than an hour. After your packet is full, you’re given a colorful bandage and sent on your way after taking some refreshments.

Though I wasn’t able to participate in donating blood this time, I’m looking forward to the next upcoming drive. Pain? Just a memory. Watching others donate blood with nary a worry killed my fear.

“You don’t have to be afraid,” Ho encouraged, “There’s always a first time, be bold to step out! And once you take that first step you will ultimately want to be a regular donor.”

Total number of participants who registered for the blood donation drive over both days: 176

Total number of blood packets collected over both days: 127