Thanks to her God-given voice, Rachel Lim lands the lead role of a tele-musical, Christina And The Runaways. The talented Lim gives voice to her character, Christina, in her first-ever starring role on TV. PHOTO COURTESY OF OKTO

It’s a Cinderella story without the prince. Producers of a show are looking for their leading lady, but no one fits the bill of a teenage girl with a magnificent voice. Along comes an unassuming 17-year-old. She auditions, they are bowled over by her voice, and the role is hers.

That’s pretty much how Rachel Lim landed the lead role of an okto channel telemusical that airs this weekend (Sunday, March 27, 11 a.m.). The first-year Anglo Chinese Junior College student was mooted when producers of Christina And The Runaways could not find a suitable lead actress after rounds of auditions.

“It was hard finding a girl that age who could really sing,” says Joseph Tan, the writer of Christina And The Runaways. “Rachel came in and auditioned, and when she sang—well, she really has a fantastic voice. She got the part. What we did have to work with her on was her acting, because the other members of the cast are experienced actors. But Rachel learned very fast, and she really gelled with the other two girls (Kimberly Chia and Clarissa Soon) on the set. When we were not shooting you could hear them giggling together in some corner.”

Alison Yap, the vocals supervisor for City Harvest Church, was roped in for a month to train the three leading actresses in their singing parts. The show, being a musical, was created in two parts: the singing and choreography, and the acting parts. Yap first recorded all the songs for the actors to learn, then helped work with them during the recording. “The biggest challenge was to get them to sing on pitch,” she says, explaining how she taught the girls to shape their mouth, to breathe and to emote. “Rachel is a very good singer. She learned very fast. I mostly had to work with her on the emotions of her character; she plays a rebellious teen.”

Lim spoke with City News about her television debut.

1. What’s Christina And The Runaways about?

It’s about an average girl who just wants to live a normal life. Growing up she was thrown into the limelight because her parents are very famous, and she was traumatized by the paparazzi. To protect her, her parents decide to move to Singapore. But because she has such a beautiful voice, she cannot hide it for long. Her school music teacher notices her talent but also finds it strange that Christina always shuns the limelight. When it is uncovered that her parents are celebrities, Christina decides to “disappear”.

2. You’ve never acted for TV. What was the audition like?

It was unnerving as I was required to act and sing in front of a camera which was pretty “up close and personal”! I was not used to the idea of filming and felt awkward and very self-conscious. A week later, I received a call to do a screen test with the rest of the cast and then they offered the role to me. It was a pleasant surprise! Lim, second from left, with her co-stars. PHOTO COURTESY OF OKTO

3. What did you have to do to prepare for the role?

Quite a lot really! It was quite stressful because the role required me to study and memorize the script, identify and get into the character of Christina. All this meant that I somehow had to be someone I was not and yet I had to be natural. There had to be many takes given my inexperience but the crew was simple incredible—they really made an effort to put me at ease. The other area of preparation was to go for my regular vocal lessons (that’s about eight to 10 hours of vocal training every week) to ensure that I could bring my emotions into the songs.

4. Amy Cheng and Jerry Hoh play your parents in the show. What was that like?

It was quite something to work alongside these experienced actors and actresses! They were very gracious in lending their experience to help me develop into my role. Their ability to ‘get into’ their role had a tremendous effect on how I was slowly able to get into mine. Jerry and Amy were really quite funny: to unwind in between takes they would create their own scripts and play them out!

6. Alison Yap worked with you on your vocals. How was that experience?

She is incredibly professional. She helped me to bring out the different emotions in each song, and taught me how to bring out the best of my voice. Alison was also someone I felt I could talk to and share my thoughts and feelings with.

7. Who do you admire as an actor and singer?

I reaaaaally like Johnny Depp! He is incredibly talented and can play just about any type of role! My favorite singer is Christina Aguilera. What a voice! 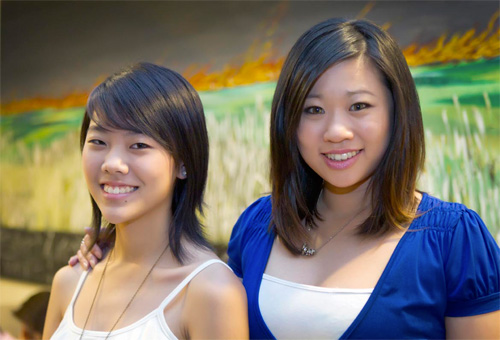 Lim practiced under the guidance of Alison Yap (in blue) for her role. CN PHOTO: Michael Chan

8. Why should everyone tune in to Christina And The Runaways this Sunday?

It’s really a movie about a young person finding her identity in the midst of confusion. She finally comes to accept who she really is, embraces her talents and ultimately uses it. There is a lot that the audience can learn from her journey, plus there’s lots of humor thrown in for good measure!

9. What do you plan to be in your very bright future?

Professionally I would like to become a vocal coach—to be able to help someone come into his or her full potential in singing. I would also like to be able to perform in gigs on the side, and definitely also work toward becoming a worship leader in church!

Catch Christina And The Runaways this Sunday, March 27, at 11 a.m. on okto.