City News profiles four graduates of the School Of Theology and finds out how it has changed their lives.

The School Of Theology was first formed in January 1994 with the aim of training up pastors, missionaries, church workers and marketplace Christians, to empower them to penetrate their spheres of influence with the power of the Holy Spirit. In the past 16 years, there have been a total of 4,965 graduates from 34 countries. Students come from Singapore and throughout Asia Pacific to as far away as Nigeria, South Africa, the U.K., Sweden, Norway and even Haiti.

One of the latest developments this year is the inclusion of Bahasa Indonesia translation to cater to the increasing number of students coming from Indonesia each year. The SOT curriculum already provides simultaneous interpretation of lessons into Mandarin and Japanese.

According to Bobby Chaw, the dean of SOT, “With this year’s batch, we will be crossing the 5,000 mark. Foreign students hailing from entirely new places such as Haiti and Thailand will be part of the 2011 cohort. This year, we have also tailored a Bible study program which will be taught by CHC’s senior pastor Kong Hee, on the books of Galatians and Romans.” Debora Henubau joined SOT in 2002 when she was just 25. She dedicated a full 10 months to study in Singapore full-time and to build her knowledge of foundational Bible doctrines, effective ministry work and discipleship, church organization and the practical aspects of running a church.

At first, she encountered difficulties with language and there were cross-cultural barriers she had to overcome. But through regular interaction with her cell group, her English gradually improved. “I was very blessed through my cell group’s warmth and fellowship toward me. As I interacted with them more, various members helped me to improve my English and helped me understand more about the Singaporean way of life. They often encouraged me and meaningful friendships resulted,” Henubau says.

Henubau has since taken her lessons in SOT and applied them in her church in Indonesia, Gekari Damai Sejahtera. She reflects, “The sessions with Rev. Kong Hee and Dr. A.R. Bernard provided fresh revelation about biblical truths. It was this foundation that ultimately strengthened my faith and understanding of the Word to change the way ministry was done in my local church. I learned, from being involved in ministry practicum, how to creatively engage children in fresh and new ways.

“The children’s church ministry here is growing at an extremely rapid pace and it has become a great blessing to other local churches. They are now starting to come to our church to see the miracle growth and learn from us. I attribute this to what I have learned in SOT. Right now, through mission trips by our church’s children ministry, many in Indonesia have been impacted by God’s Word,” she added.

Francis Tay, 49, an associate professor in Mechanical Engineering at the National University of Singapore, first enrolled in SOT in 2009. Sharing on his key takeaways from SOT and the foundational Christian values and life lessons he had learned, he said, “Being trained at SOT teaches one to have good balance in life. When you apply what is being taught, you will realize that any challenge can be overcome and you’ll have special grace and strength to cope with the requirements of SOT.”

Tay was deeply inspired by several testimonies he heard from different speakers. “I was greatly impacted by how God came through even when everything seemed impossible. It was listening to the multiple life stories depicting the conviction, life transformation and the ultimate grace of God during SOT that was priceless!”

Many graduates, like Tay, have discovered that skills and lessons learned at SOT are fully applicable to daily life, even outside of the church or ministry context. “SOT teaches you not just spiritual disciplines but practical disciplines. [I learned a] simple, but important discipline of arriving on time for class and clocking in by 8:45 a.m. to avoid chalking up demerits for tardiness,” he smiles.

“Post-SOT, I experienced personal breakthrough upon grasping and applying the message of the Cultural Mandate to my sphere of influence. I wanted to be able to bring more of Christ into my workplace. I also decided to serve as a cell group leader shortly after Bible school. My training at SOT laid a solid foundation in the aspects of body, soul and spirit to meet the demands of serving as a CGL together with my wife, as well as serving actively in the university with a spirit of excellence.”

Michael Song, 51, business partner of family business V.Hive, enrolled in SOT in 2006 together with six other business friends from his cell group. Song devoted half a day, every day, to studying at SOT for 10 months while juggling family commitments, leading a cell group, giving Bible studies and running his own furniture retail business that has branches throughout Singapore.

“SOT was a platform for me to stretch both my faith and my capacity. It is in SOT that God gives us a platform to be willing to serve, to expand our capacity and develop an unswerving trust that in God, all things will work out,” Song says, “I was never a university degree holder and had left academic life over 30 years ago. It was a miracle for me as I faced the daunting task of completing my essay assignments, book reviews, Bible readings and studying for tests.

“Through God’s grace, I was not just able to balance SOT, family and business, but business flourished even when I was away for half a day for almost an entire year! I am glad that SOT taught us to complete our journey and to finish well!”

Song also attributed the entire experience in SOT to anchoring his faith deeper in God. When he was studying for his exams, Song used the opportunity to bond with his two children who were in Secondary 2 and Secondary 4.

In 2011, this SOT alumni generously sponsored some furniture (12 cupboards and 14 beds) to help furnish 14 hostel rooms. It was a gesture that touched Amber Tan, who oversees the hostel. She shares, “When we first approached Michael, we were looking to buy furniture from his store at a discounted price. Instead, he decided to give us whatever we needed! We were very grateful for his kindness which I believe is a tremendous blessing to our international students.

Song also discovered that his training at SOT had equipped him with critical skills applicable to the business context. “Going through the preparation lessons and execution of seven-minute preaching tests were most valuable. I was able to learn about critical elements of public speaking just like in business school, learning how I could engage the audience, having the right posture and body language and delivering the three key points that my audience would remember.”

PHOTO COURTESY OF TAN SEOW HOW

Tan Seow How, senior pastor of Heart of God Church, Singapore, enrolled in SOT for two years in 1996 and 1997 when he was 26. God had planted in him a desire to build a strong local thriving church, modeled after City Harvest Church.

“I shared my vision to build a strong local thriving church with Pastor Kong and he invited me to join in for a two-week series he was teaching at SOT on ‘Building a Strong Local Church.’ I was so impacted, enthused and inspired by the messages that I enrolled myself full-time in SOT for two years instead of one.”

Together with his wife, Cecilia, Tan started the church with three other members in 1999. In February 2011, HOGC crossed the 2,000 mark in its weekly regular service attendance.

Tan shared that SOT was a time that he laid the foundations in his ministry. “It was during my time in SOT that I learned, under the tutelage of Pastor Kong, how I could be a real, loving, secure and confident person. I learned how to carry myself as a pastor, as a man of God, in my thinking, my life testimony and in everyday living, to walk, talk, preach and minister to others while depending on the Holy Spirit.” 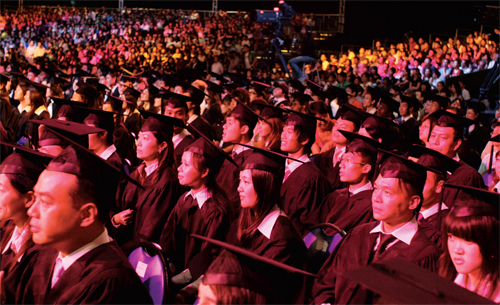 SOT was indeed a turning point for Tan, moving his life and ministry to another level of faith and expansion. Apart from ministering in his home church, he preaches regularly in CHC’s affiliate churches in Taiwan, Kuala Lumpur and Penang.

In 2010, Tan was invited to A.R. Bernard’s church—Christian Cultural Center—in Brooklyn, New York, to speak at a youth ministry meeting. Tan also spoke in 2009 and 2010 at Ulf Ekman’s Word of Life’s youth conference in Uppsala, Sweden.

“Before SOT, I was a faithful minister. After SOT, I became a faith-filled and fruitful leader. I can say that without SOT, Heart of God Church would not have been even close to where we are today in our ministry for God!”