A Singaporean team headed to Sri Lanka with S$54,000 to aid flood victims. 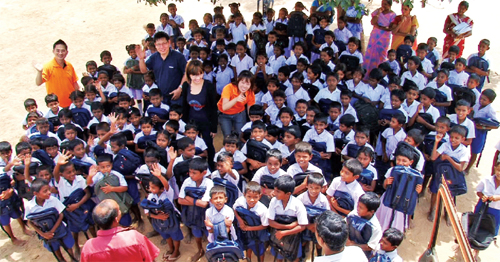 The students of a flood-hit school enjoying their school supplies brought by the team.

Since Jan. 8, Sri Lanka has been hit by floods which have, to date, affected nearly 1.3 million people, killed 40, and destroyed crops and livestock. The United Nations estimated that 5.6 billion INR in aid is required to help the situation, but to date, only a third of that has been raised.

Kenneth Sim, CityCare Ltd’s volunteer field director received information of the dire situation from individuals the organization had helped last year in Sri Lanka’s Internally-Displaced Persons camp in Vavuniya. A casual chat with two media producers, Elaine Xu and Terence Tay, both members of a business group under Chew Eng Han, led to a fundraising effort that raised S$54,000 in one week.

Chew said, “Kenneth told Elaine about the situation in Sri Lanka and asked if our zone could help the victims who were homeless and without food. We couldn’t refuse, and hence I made an appeal to the members to raise the funds.”

The business groups under Chew raised a total of S$24,000 in one night. On top of that, it was agreed that they would donate S$30,000 from their humanitarian fund, an ongoing collection specifically created for charity and relief works. The Singapore team with the residents of the widow center.

The team of Xu, Tay and volunteer Kelvin Low had their trip coordinated by Sim and CityCare worker Cindy Koh, who accompanied them. The group of five left on Feb. 20 and returned within the week.

The initial floods had made it nearly impossible for the people to get their daily supplies of food and water. Food prices skyrocketed as people were unable to travel to other towns to buy food. The team brought up seeds for 120 farming families to grow their own consumption; food packs enough to feed a family of five for 600 families from nine villages (the items include milk powder, rice, flour, sugar, biscuits, soap); shoes, textbooks and school bags for children in two primary schools, and three water pumps to be shared among 80 farming families.

By the time the team arrived in India, the floods had receded. “When we reached Colombo, we realized that the weather had been really hot and we did not really see any signs of flood, save for wrecked roads and fallen trees,” said Xu.

But though the worst seemed to be over, the people were left destitute by the floods. Sim said the plight of the Sri Lankans moved him deeply.

“We’re talking about an ex-war zone,” he explained. “When the civil war ended in 2009, the people had nothing. But in the past year, they managed to recover some of that; they started to do some farming. Then the floods came and wiped away everything they had built. It was a double whammy for these people. We felt so much for them.”

Xu was equally touched by what she saw. “The most heart-wrenching moment was when we found out what some of the families had to eat after the flood. Most of them had expected the waters to recede quickly, so they left their homes with nothing except the clothes on their back. They survived on a watery substance made from a little rice, a lot of water, some green chillies, and a pinch of sugar and salt. To feed their children, parents will choose to go without food for a few days. Some families had to go to the stores and take out a ‘milk powder loan’ so that they could feed their babies. There was one family who had four young children who were fed only plain water just so they would feel full.”

The five also faced an unexpected challenge: land mines. Where they were was a former war zone, and the flood waters had caused some of the landmines to move. The group at one point drove through a field of landmines.

“The road in front of us was cordoned off by a line of yellow tape and we thought the road was either under construction or maintenance,” recalled Xu. “We looked around and saw yellow and red poles sticking out of the ground on either side of our car, and people there wearing safety vests and face shields. We realized then that we were surrounded by landmines.” Thanks to their coordinator, they were led onto a safe road out.

The team was, according to their local contacts, the only outside help that Vavuniya has received to date.

“I would say this was a very successful trip,” said Sim. “That area was a restricted zone–no foreigners were allowed. But after the flood, they let us in to help. They were very touched by our help.”

For Xu, there were not many words of thanks but her satisfaction came from feeding an estimated 4,150 individuals. “The best part was really having the money to buy supplies for the families. Nothing beats the feeling you get from literally feeding the hungry. Because we had adequate funds, we did not have to be so caught up in trying to save 100 rupees here, and 100 rupees there. We did not have to give them half a bar of soap because we could not afford to give them a whole bar. We do not speak their language and they do not speak ours, so there were not a lot of thank-yous. But we saw how tightly they held on to the rations as they returned to their villages—that spoke louder than any words.” A Hand Up, Not A Handout

The team is looking to help Sri Lanka on a more long-term basis. “Aid must be made sustainable so we make a long-term commitment to the countries and communities we are helping,” explained Xu. Aside from food rations, the team brought to Sri Lanka seeds for the farmers to grow for sale, creating a long term source of income, and boosting their small economy.

“We brought 120 packets of seeds for the farmers, because the ground is already suitable for replanting,” said Sim. “We picked the plants that would harvest fast, like brinjals, chillies, bananas.”

Xu, Tay and Low spent a day traveling to explore a farm that they could potentially invest in. “We have identified a 1.5-acre farm that is suitable for our business groups to microfinance. We have found a supervisor to oversee the operations and who work with the farmer to provide employment to the poor people in the area.

“By providing microfinancing, we want to be able to create a ‘ripple effect’ and help more people to raise their standard of living. By feeding the families and providing parents with proper jobs, they will not see their children going to school as a burden on the family’s finances but as a way out of the cycle of poverty because their children will increase their chances of getting better jobs, and earning higher salaries,” Xu said in explanation of the long-term plan.

The team spent S$20,000 of the sum raised, and are currently planning for their second trip, which will be in late April. They are already receiving donations of shoes, bags and milk powder from business group members. There are plans to partner with Crisis Relief Singapore to bring medical aid into the villages the next trip.

“We hope that these families we are helping will be able to survive and make a living after three or four months,” said Sim. “We are going back to help more villages by bringing seeds for them to sow, to make it possible for them to generate some income.”