Japan Earthquake: A Time To Pray

Within 24 hours, Japan faced two of its largest natural disasters in its history. Two Singaporeans who were in Tokyo the day it happened speak to City News. A Self Defence soldier smiles as he holds a four-month-old baby who survived the recent tsunami with her family at Ishinomaki city in Miyagi prefecture on March 14, 2011. An explosion rocked an earthquake-hit nuclear plant, as Japan struggled to avert a catastrophic reactor meltdown caused by a quake and tsunami feared to have killed more than 10,000. PHOTO: YOMIURI SHIMBUN/AFP/Getty Images

Japan is one of the world’s most seismically active countries, and tremors are a common occurrence, so much that in Japanese cities, some tall buildings sit on ball bearing bases that allow the building to adapt to movements on the ground.

But nothing could have prepared the country for the damage wreaked by the 9.0-magnitude earthquake that struck in the early hours of March 11.

The quake felled buildings and caused the explosion of the nuclear plant in Fukushima, which is today the center of concern as experts estimate radiation exposure to cover a 20-kilometer radius. A second nuclear plant is now in danger as its cooling mechanism appears to have failed.

But possibly the worst effect of the earthquake, which struck near Sendai, the east coast of Japan was the tsunami that it triggered.

Walls of water reportedly measuring 30-feet high overcame entire towns, covered rice fields, and swept buildings and vehicles inland. Millions around the world watched in horror as the Internet and television broadcast footage of water and mud washing over Japan’s beautiful scenery, reducing its landscape to a disaster movie poster. On Saturday, the north-eastern coastline was a blackened scar when viewed from above, The Washington Post reported. 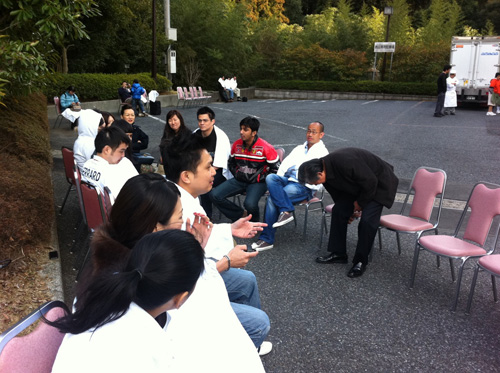 Hotel guests at Narita waiting outside for the aftershock to settle. PHOTO: Kuang Jing Xuan.

The death toll of those reported missing and those unaccounted for as of March 13, has cross the 2,000 mark, but observers fear the worst. Nikkei.com reports that “In Fukushima Prefecture alone, 1,167 were unaccounted for and well over 600 corpses had been found in both Iwate and Miyagi prefectures on the Pacific coast… In Iwate Prefecture, north of Miyagi, many corpses were found Sunday morning under the rubble in Rikuzentakata. About 5,000 houses in the city had been submerged by the quake-triggered tsunami, and the city office has confirmed that only 5,900 of its population of about 23,000 had taken shelter…In Minamisanriku, about 10,000 people, over half the town’s population, remain unaccounted for.”

For the hundreds of thousands driven to the streets and shelters, the cold temperatures, lack of electricity, food and drinkable water pose a separate set of challenges.

A Japanese national living in Singapore, Naomi Lee, was horrified by the news reports on Friday. “I was lost for words when I watched the news. A big wave of Tsunami wiped away people, cars, houses, furniture. My Japanese friends gathered to pray for our home country. Please pray for Japan.” Two young Singaporeans were trapped in Narita Airport on the night of March 11, and had their first experience of an earthquake.

Kuang Jing Xuan, 24, a flight stewardess, was on an overnight flight to Narita. She arrived in Japan at 2 a.m. and checked into the airport hotel to sleep. “At 2.40am, the whole room started to shake. I heard people outside running and evacuating. It was very cold outside, so I put on my clothes and ran out of the hotel. At first I didn’t think it was unusual—earthquakes are quite normal in Japan.”

It was only when she started Tweeting about her experience and began reading the Twitter trends that she realized that the earthquake was a major one. But she said the Japanese remained very calm and their service was as impeccable as ever.

“My friend had ordered room service 10 minutes before the tremors began and we were evacuated, and when we got back to our rooms, his room service arrived within 20 minutes!

“The Japanese were awesome, so calm in the face of an earthquake. When we stood outside the hotel, they gave out towels so we could keep warm in the eight-degree temperature. One Singaporean guy who was in his suit wanted to give the towel to a hotel staff, who was in her short skirt and thin stockings, and she refused.”

Kuang said that tremors happened the whole night, and a colleague asked to bunk with her because she was too afraid to sleep alone. “But I felt assured it would be okay,” she said. “I think with God, it really makes a difference. I could sleep comfortably though it was only for a few hours; I felt rested.”

Communications were down and Kuang could not call home, but her company managed to track the group of them down, and called all their families to inform them of their safety. “But I managed to Skype my Dad as the Wi-Fi was still working. Thank God for 3G and Wi-Fi!”

It was only when Kuang was working on the 11 a.m. flight from Narita to Changi on Saturday that she realized the extent of the earthquake’s impact. What was to be a full flight turned out to be only a third full, because the passengers could not make their way to the airport with the roads broken and trains and railways left without power after the quake.

“There was one passenger who had got into his taxi the day before at 3 p.m. He only reached Narita airport the next morning, and his taxi fare came up to S$1,000!” “I Crouched Near The Lift!”

Lucas Chia’s experience at Narita Airport on Friday proved a more dramatic one. He was in transit at Narita from Seoul, on the way back to Singapore at 2.15 p.m.

“I was shopping at the airport shops about half an hour before the first shock happened. Everyone panicked. The store I was in was next to an atrium and we all ran out, and many people squatted down on the floor. I went and held on to a central beam. It was quite scary because the ceiling and walls were all glass, and the whole structure was rattling. The glass pieces looked like they were going to fall down! The tremor lasted about a minute, then it stopped.”

The 23-year-old admits that experiencing the first tremor was “quite exciting! I called my friend who was still in Incheon Airport in Korea to let him know I was okay.”

Then a more severe aftershock happened 10 minutes later. “It was a big one. False ceilings began to fall off. This time it was really chaotic, everyone was screaming and running around. That’s when I got scared! I studied architecture in the Poly, so I knew that the lift is the most secure structure, so I went and crouched there. At least nothing would fall on my head!”

Airport security evacuated everyone from the building to the open ground, where they waited for three hours in the cold. “They started passing out blankets, which to me was not a good sign because it meant we were going to be there for a while.” After two hours, buses were driven in, and the passengers could wait in the warm vehicles. Finally, they were told it was safe to return into the airport and stay on the ground floor. All flights were cancelled that night.

Chia parked himself 100 meters from the exit, where he found a power source to charge up his phone and laptop. He had, thankfully, packed his toiletries and a change of clothes in his carry-on luggage. The Narita airport staff gave out food and water, and later, sleeping bags, pillows and blankets so that the passengers could sleep.

“It was good—they had more than enough for everyone. But it was still chaotic—people were grabbing food and supplies.” When he went to take a shower at 2 a.m. he returned to discover his sleeping bag had been stolen. Paranoid, he tied all his belongings together and slept on them. The next morning, the airport was filled with anxious passengers crowding counters to get flights out. After many attempts, Chia spotted a counter that had no signage, but the two counter girls were very helpful and eventually got him on a Thai Airways flight back to Singapore despite myriad difficulties with his payment. Chia finally arrived back in Singapore on Saturday night at 11.30 p.m.

“Thank God I made it out of there, and thank God for those counter staff! Through this experience I am reminded that God is with me always.”

World Jumps In To Help

There has been an outpouring of aid to Japan from across the world: 69 nations have offered help as well as five international aid organizations. Even China, with whom Japan had a territorial disagreement with last year, sent a rescue team of 15. The Red Cross Society of China has also pledged RMB1,000,000 (about S$193,000) in aid to Japan. Even New Zealand which battled its own crisis in Christchurch barely a month ago offered help.

On Saturday, Singapore sent a team of five Singapore Civil Defence Force officers and search dogs to aid in the search and rescue of missing persons.

Celebrity singer Lady Gaga was quick on the uptake, Tweeting on Friday that she was coming up with a prayer bracelet for Japan. Each bracelet sells for US$5 starting March 25, and all proceeds will go to a Japan tsunami relief fund.