We trace the humble beginnings of one of City Harvest Church’s most vibrant ministries—the Makeup Ministry. 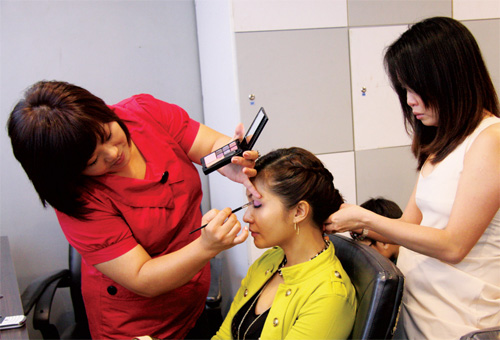 The Makeup Ministry ensures that those who go on stage look sharp and chic. CN PHOTO: Elvis Chiu

It was a scene straight out of a reality TV show—models were strutting trendy runway looks on stage to the tune of Kylie Minogue’s ditty “Can’t Get You Out Of My Head” and accompanying them were the stylists.

That was back in 2001, when the inaugural hair and makeup contest was organized at the former Hollywood Theatre along Tanjong Katong Road. The venue was then home to City Harvest Church.

Before that particular competition, six youths and young adults eagerly committed their time to be trained by a top hairstylist and make-up artist. Their desire was to be equipped with the necessary skills to serve in the church community by creating beautiful looks for the right occasions. One of them was Sharon Tan, a finance director, who now  heads the Makeup Ministry in CHC as a volunteer.

Not only did Tan and her fellow contestants learn valuable techniques and draw useful tips from their experienced trainers, the contest also led to many enquiries about joining the yet-to-be-officially birthed Makeup Ministry.

“Prior to the contest, whenever CHC had big events like Easter and Christmas productions, we simply gathered a few friends who had a flair for makeup and fashion, and a heart to serve, to come together and support the Drama Ministry. In fact, we started as a unit under the umbrella of the Drama Ministry,” Tan shared.

The shift from Hollywood Theatre to Jurong West Street 91 in late 2001 opened a new chapter for the makeup team, as they became a full-fledged church ministry.

In 2002, during a church-wide Bible study, there was a suggestion to “beam up” the worship team on stage. It was a timely initiative, as the church worship services were stepping into the world of big screen and live Internet webcast. A new benchmark had to be set. Ever since then, anyone stepping on stage had to look sharp and chic. This move went beyond the regular English services to the other services like the Children’s Church and Chinese Church. The volunteers have also been trained in makeup for drama productions. CN PHOTO: Daniel Poh

From Strength To Strength

Over the years, the ministry has upped the ante with a growing portfolio. From merely supporting the weekend church services, the team now supports large-scale events such as the international Emerge Youth Conference in 2003, CHC’s sixth music album Cross in 2005, to the Children’s Church musical in 2007, as well as Asia Conference 2008 and 2010.

One of the members whose experience and skills have developed significantly with the ministry is Benedict Choo. He joined the team in 2002 and has never looked back. Now a professional makeup artist, Choo is still actively serving. One assignment he will never forget was the opportunity to serve in Beijing when he was there to assist the choir at the opening of the Olympic Philately & Cultural Tour in 2008.

The ministry members have also recently imparted their skills and experiences beyond our shores. Just last year, Choo and Chew Sue Binn—one of the ministry leaders and a business development executive by profession—were invited to train keen members of City Harvest Church Kuala Lumpur, one of CHC’s affiliate churches.

Learning To Make Others Beautiful

In 2011, the ministry aims to build a team of confident and well-trained members. For the first time, resources are being consolidated across the ministry to start official makeup training sessions in CHC. The training curriculum is a sum total of the ministry’s decade-long of personal, professional and team experiences, reading, observations and tips sharing.

Driving this training with a dedicated team of ministry leaders is Debra Chong, a mother of three and a sales team manager with a land investment company. Like many volunteers in the ministry, she started out as an amateur with zeal and passion in wanting to bring out the beauty of women (and men). Having been trained professionally, Chong revealed that not only has training raised her confidence level, it has also better equipped her to serve more efficiently and competently.

“Our ministry training will empower members with the required knowledge, skills and attitude to serve with commitment and passion. We believe our volunteers will have the confidence to make others more beautiful!” affirmed Chong.

For more information about CHC makeup ministry, e-mail to info@chc.org.sg.

The ministry is now holding a course for those interested in joining the Makeup Ministry. The theme of the course is “You’re So BEAUTIFUL!” and it will commence this month. There will be 12 lessons, including an assessment on the final day. The trainers are keen to provide exceptional training and will cover hairstyling, stage makeup, and character and special effects makeup. The curriculum will also touch on having the right attitude in serving; especially during big events when schedules are packed, and the makeup artists, being volunteers in the church, will have to learn the art of balancing work, family and ministry with a great attitude and a spirit of excellence.