COPE’s luncheon for 220 elderly folk turned out to be great, rowdy fun. The COPE Luncheon was a hit with the elderly.

“The people were very sporting. It’s one of the liveliest events I’ve hosted. I think everyone enjoyed themselves greatly,” said Allen Yu, the emcee for COPE’s Chinese New Year luncheon for a group of old folks and volunteers.

The event, which happened on Feb. 12 at Kia Hiang Restaurant at Kim Tian Road, brought together 220 elderly beneficiaries living in Old Airport Road, Pine Close and Toa Payoh, with 35 of COPE’s volunteers. The day’s program was chockfull of treats, from a sumptuous Chinese New Year lunch, games, prizes, songs and other entertainment.

COPE, a service of City Harvest Community Services Association, partners with the South East Community Development Council to serve the elderly in the three housing estates each month. The outings and events organized through this outreach program allow COPE’s social care professionals and volunteers to establish strong rapport with the elderly.

At noon, the beneficiaries, dressed in their New Year best, started arriving, and soon the restaurant came alive. Yu  broke the ice with a little game of origami—he taught his audience to fold rabbits with origami paper, since they were ushering in the Year of the Rabbit. Volunteers guided the enthusiastic old folk, who proudly displayed them on their table throughout their lunch.

Lunch was served and the first dish was the traditional Prosperity Salmon Raw Fish Lo Hei. Yu set the mood by explaining the significance of each ingredient in the dish—the most important was the raw fish which represents prosperity. The tossing of the lo hei soon began with a joyful noise: shouts of blessing filled the room.

Lunch came with entertainment—volunteers Tina Law and Helen Law sang two Catonese songs that the elderly liked so much, they stopped eating and began clapping and singing along. Some even went up on stage to dance to the live music. 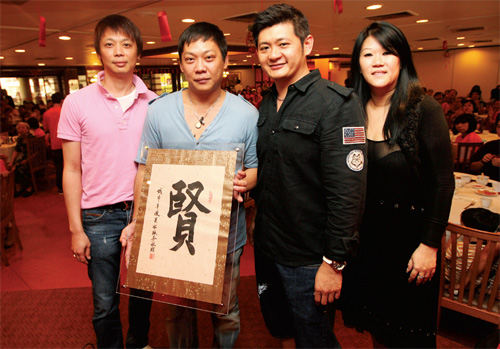 In between courses, a scavenger hunt was conducted. Teams of elderly participants had to locate eight particular items and tie them on a string. When they had completed this task, they had to be the first on stage with their string. Many groups rushed to the stage and vigorously waved their hands in order to grab the emcee’s attention. It was a joyously chaotic scene to behold.
The highlight of the lunch came when some of the beneficiaries decided to say thank you to the COPE volunteers in a fresh way. May Phang went up and sang a spontaneous song to the crowd, thanking the volunteers for taking time to organize the event. She started the ball rolling; a few other old folk serenaded the room, and one lady even showcased her martial arts routine, aided by comments from the emcee.

Liaw Niam, a beneficiary in her 70s, enjoyed herself tremendously. “The lunch was very fun. I’m very happy to have an opportunity to go out.”

Organizer and COPE’s manager, Irene Ho was very satisfied with the event. “It’s a great way to start the new year,” she said. “Everyone was in high spirits and it was a great time of bonding for both elderly and volunteers.”

Sponsors of the event were Chris Seow, Adrian Cheong and Calvin Tan, three good friends who wanted to do their part for the community. Said Tan, “We wanted to bring some smiles to the old folks and we’re delighted to see them enjoying themselves so much. It was worth it.”