Love And The Human Heart Paul Scanlon expounds on the importance of loving others before self. CN PHOTO: Kenneth Lee

On the weekend of Feb. 12 to 13, the air at City Harvest Church was filled with romance. Churchgoers enjoyed a special drama production and heard a timely sermon from guest speaker, Paul Scanlon.

To commemorate Valentine’s Day on Feb. 14, the CHC drama team put together a special drama titled A Taste Of Love. Intentionally titled to pun on the theme of the drama, the story revolved around love encounters taking place in a restaurant. The drama showcased a mixture of sweet romance, fidelity in marriage, forgiveness and reconciliation that was beautifully blended with humor at the right moments.

At the end of the drama, Yong Te-Chong and Annabel Soh performed the romantic duet, “When I Fall in Love.” The mood was set for all the couples in the service as deputy senior pastor, Tan Ye Peng, led all married couples in renewing their marriage vows. Seeing the hundreds of married couples, both young and old, rededicate themselves to each other was a heart-warming experience.

LOVING FROM THE HEART

Paul Scanlon, founder and senior pastor of Abundant Life Ministries in the U.K. ministered in all four of CHC’s English services. Scanlon is a passionate teacher with a heart for making a difference in the lives of the people in his community. One of his extraordinary teachings includes the “15 Minute Revolution,” which challenges people to purposely inconvenience themselves for 15 minutes a day to help someone else.

Scanlon shared two different powerful messages—insights that he gleaned from his 35 years of church ministry. In his messages, Scanlon shared deep truths relating to love and the human heart, appropriate reminders during this season of love.

He revealed an astonishing scientific fact regarding the rate of a person’s “self-talk”—conversation that goes on within a person—which happens at 1,300 words per minute. This is more than quadruple the speed of actual speech, which occurs at about 300 words per minute. Hence, what a person says to himself or herself is of much greater impact than what he or she may speak out or listen to. Scanlon exhorted the congregation to look inward and reset their internal “jukebox” of the heart so that it could play a different tune and be programmed with positive things instead of negativity. 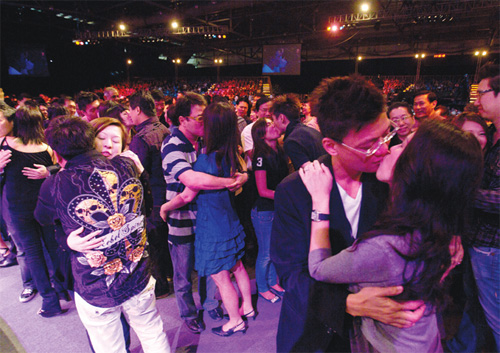 An equally riveting message that Scanlon shared was about “Lostology,” a self-coined term for Scanlon’s study of the unchurched and non-believers.

The pointers he shared were gems of wisdom, particularly when he declared, “A person who can say he is lost is to be highly envied among people. To be lost suggests you belong to someone, that you have value and someone misses you. Nobody gets lost on purpose, and when the church realizes that, it is going to soften our approach toward them. The opposite of love is not hate, but judgment,” he explained.

He expounded on how the church should follow the example of Jesus in being accepting and loving, and not expect unbelievers to be perfect. The church should strive to be an entity integrated within society so it can become a “magnet” that people flock to for meaning and direction, as opposed to being overtly self-righteous and judgmental.

Scanlon then urged the congregation to keep Christianity simple for those who are new to the faith. Though it may seem obvious, the truth is that believers tend to forget what it feels like to be a new convert, and lapse into speech or behavior that is foreign to unbelievers.

BECAUSE HE FIRST LOVED US

Scanlon’s messages brought the meaning of love to a deeper level, beyond just the thrill of romance or goodwill toward others, to an intimate understanding of how to love ourselves in our heart, as well as to love others unconditionally.

To quote Scanlon, “Company fixes being alone, but only being found by your Maker fixes being lost.” Truly, love comes from God who demonstrated His love for us by sending His Son, Jesus Christ, into the world to die for mankind (Rom. 5:8). And herein stems the ability for the Church and her people to love in return because He first loved us.