A visit to the Harmony Centre @ An-Nahdhah by the staff of City Harvest Church was an invaluable experience in religious tolerance. The tour of the Harmony Centre was an insightful one for the staff members of CHC.

Since the tragedy of 9/11, where close to 3,000 people from over 70 countries were killed in the terrorist attacks, racial tensions that were undoubtedly simmering beneath the surface of multi-cultural nations, especially the U.S., were brought to boiling point. Confusion, hurt, and the demand for retribution in the aftermath led to many innocent bystanders becoming victims of hate crimes and racial profiling for merely being associated, whether legitimately or not, with the ethnicity or the “religion” that the terrorists claimed to subscribe to. But, as always with the human condition, a silver lining can be found behind every cloud. In the wake of the attacks, there was an awakening to the need to champion inter-ethnicity and religious ties, as isolationism would do no good in today’s global community. Singapore, which wears the badge of religious freedom proudly, leads the charge. Living in a multi-cultural society only means that more effort must be made to understand the differences in the multitude of religions present, so as to maximize chances of harmony.

City Harvest Church has always been a staunch proponent of inter-faith interactions. CHC has recently heralded in the Chinese New Year with the Taoist Federation at a yu sheng luncheon at San Qing Gong Temple. The most recent of these efforts was a trip to the Harmony Centre @ An-Nahdhah.

In attendance at the Harmony Centre was a delegation of 25 staff, representing various departments in CHC. Officiated by Prime Minister Lee Hsien Loong in October 2006 at its opening, the Harmony Centre is a bid by the Islamic Religious Council of Singapore (Muis) to make Islam in Singapore ingenuous to the public in light of the negative sentiment surrounding Islam after 9/11. With its location in a prime area with a concentration of religious establishments, it is also designated as a center where the 10 recognized religions in Singapore can meet for discussions and fellowship. 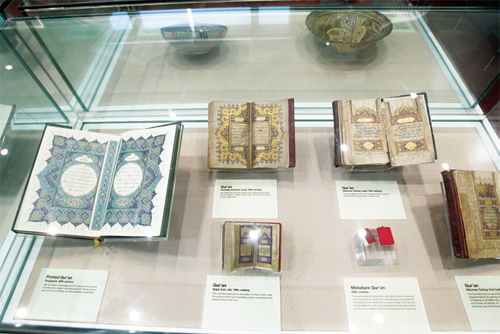 On display in the Islamic Lifestyle room were various copies of Islam’s holy book, the Quran, as well as interesting artefacts such as calligraphy in Arabic. CN PHOTOS: Michael Chan

It was a fruitful trip for many, as the guided tour of the Harmony Centre was both educational and informational. The tour comprised four major sections: Images of Islam, wherein visitors got a glimpse of Islam in an international context; Civilization Islam, which portrays the marks left in both international and local history by Islam, featuring historical figures such as Zheng He the Chinese-Muslim explorer and Ibn Sina the Father of Modern Medicine; Essence of Islam explaining the basic tenets of Islam and finally, Islamic Lifestyle, containing interesting artefacts such as the Quran, calligraphy and even a piece of the kiswah curtain which is used to cover the Ka’bah in Mecca.

“We in Singapore are living in a multi-racial, multi-cultural nation so it is beneficial for everyone to learn to respect, and gain a better understanding of each other’s religion,” says Wu Yuzhuang, a district pastor in CHC who was part of the delegation. “I now have a deeper understanding about the Islam faith, and I also got a chance to take a look at how the Muslim center operates. It was an eye-opening experience for me.”