Love Of A Lifetime

In this era of fast love, it is heartening to find extraordinary men who love till the very end. Here are their inspiring stories. ﻿CN PHOTO: MICHAEL CHAN. Steven Lee on one of his daily visits to his wife at the nursing home.

It was under rather tense circumstances that 76-year-old Steven Lee Weng Kee met his wife, Wong Ah Chee, 77, some 52 years ago. She was a worker on strike and he was the reluctant reporter assigned to cover the strike.

As fate would have it, he interviewed her and that serendipitous meeting marked the beginning of two years of courtship, half a century of marriage, six children and numerous grandchildren.

Wong has been living in a nursing home as she requires specialized care due to feeble legs that have rendered her wheelchair-bound. Lee visits her rain or shine every day. Even the recent bout of unusually wet weather did not deter him.

During his visits, he prays for complete healing of her body and mind, as she also has mild dementia.
He tenderly recalls how she smiles when he makes playful jibes at her. Lee fondly remembers their shared wanderlust in their younger years when they visited different parts of China and England together. He then proudly produces a yellowed, 20-year-old photograph taken with his wife on a famous floating restaurant in Hong Kong. His secret to a lifelong marriage is: mutual respect. 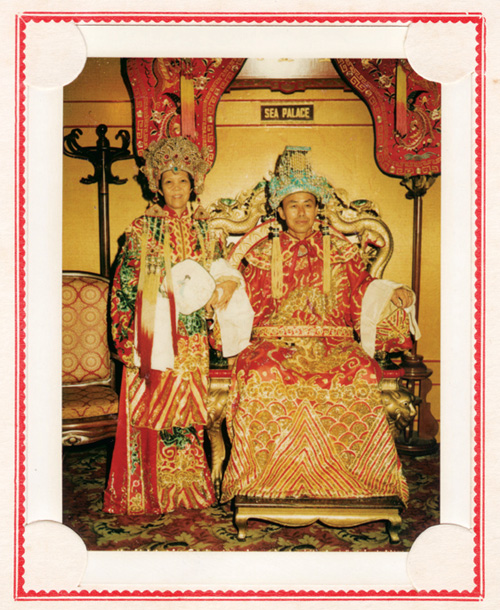 PHOTO COURTESY OF STEVEN LEE. The Lees see through thick and thin in their marriage.

To many, the love shared between couples of the older generation is typified by a sense of utilitarianism, a rite of passage as they eke out a living during the formative years of Singapore. In other words, the image that comes to mind tends to stem from the stereotype of an older generation suffused with stoicism, where love meant nothing more than the provision of a roof over one’s family and food on the table.

And yet, demonstrations of love that goes the distance by men like Lee are a stark contrast to modern-day romances that are often plagued with extra-marital affairs and hiking divorce rates.

Loke Chun Seng may be 90, but he has yet to enjoy his twilight years. His broad, unassuming smile and spirited demeanor conceals the tremendous labour of love he undertakes in being the primary caregiver to his wife, a dementia patient.

Loke, an ex-mechanic, met his wife, Guan Nian Hao, 92, through friends and tied the knot when she was only 17 and he, 15. They have had three sons and two daughters.

Loke spends his Sundays at City Harvest Church’s Dialect Church services, the only respite he gets during the week. The other six days are devoted to taking care of his ailing wife. His day begins at 6 a.m. He cooks, feeds and cleans his wife, even assisting her in going to the toilet. PHOTO COURTESY OF LOKE CHUN SENG. Loke (seated, third from left) and his wife during a Dialect Church outing.

Loke goodnaturedly recalls Guan accusing him of adultery even though she has been the only woman in his life. The fact that the unconditional love showered on his wife is unreciprocated makes it all the more poignant.

Although both men are no longer in the prime of their life, they demonstrate what it means to love with an agape love that never leaves nor forsakes with the passage of years, even when beauty has faded and health has failed.