Underpinning a believer’s transformational growth in God is the refusal to be offended. 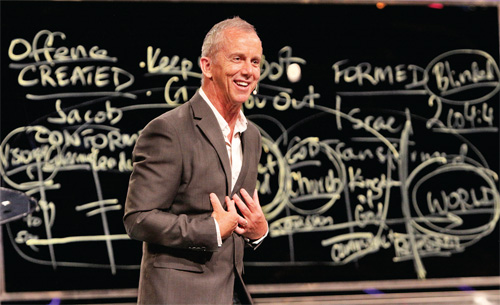 Members of City Harvest Church are well acquainted with the dynamic preaching of Christian City Church founder and senior pastor, Phil Pringle, but they were by no means shortchanged when his right-hand man, Mark Kelsey, took to the pulpit for the very first time on the weekend of Jan. 8 to 9.

Kelsey’s sermon, titled “The Seven Stages Of Transformational Growth,” focused on the ascending levels of maturity a believer undergoes as he gets planted in the house of God. Coming from a man whose own involvement with the C3 movement as a young believer since its early days in the 1980s led him to become the executive pastor of C3 Oxford Falls today, it was an apt message indeed.

“2011 is going to be a year of progression and moving into new things, but the most important change in our lives isn’t the change of our circumstances, but the change of what’s happening inside of us—that is what prepares us for what happens on the outside,” he said. Reading from the Book of Hebrews 6:1, which states, Therefore let us move beyond the elementary teachings about Christ and be taken forward to maturity, he continued, “We want to change our circumstances but God wants to change us first. He wants us to move up.”

With a blackboard and a white marker, Kelsey laid out the seven “gateways” of growth. While each human being is created in the image of God, it takes time for him to take on the form of Christlikeness, in which he will fulfill his God-given destiny.

As unbelievers receive salvation and accept Jesus as their Savior, they pass through the “gateway of revelation.” However, God does not just want His children to have a general, universal experience of their salvation—He wants them to be in connection with the body of Christ, that is, the local church. “In the kingdom of God, you discover eternity, but in the house of God, you discover your destiny in bringing others into the kingdom,” said Kelsey. By planting himself in a church, the believer passes through the “gateway of commitment.”

This is followed by the “gateway of submission,” which denotes the stage whereby a believer takes on a servanthood role as he joins a ministry and serves in church. At this point, Kelsey made the distinction between subservience and servanthood—the former is imposed, while the latter is a personal choice. “The submission gate is really low; as you submit to the leaders, you enter this new dimension called ‘servanthood.’ Once you’re a servant, you’re not just a committed member anymore but your heart, your life and spirit are yielded to God, and you become a dimensionally different person.” Obviously, some are then called into full-time ministry, to assume positions of leadership, government and eventually to be visionaries, but “the minimum level of dimensional growth that we’re all called to is servanthood,” said Kelsey.

Wrapping up his sermon, he cautioned the congregation against the enemy’s main tool to get believers out of the kingdom of God—offenses. “There are three types of Christians—those that get offended and don’t get over it, those who get offended and get over it, and those who are unoffendable,” he said, to much laughter from the congregation at the last part. “Jesus should have been the most offended person who ever lived, and yet on the cross He asked for forgiveness for those who wronged Him.”

Kelsey then told a true story illustrating how the attribute of refusing to be offended resulted in the salvation of Peter, his staunchly atheistic colleague and former university course-mate. During a car ride, he tried to share the gospel with him, but was instead defeated by Peter’s strong arguments for atheism. Negatively affected, he later questioned God about the incident, to which he received the reply, “You’re not meant to be incredible, you’re meant to be credible.”

Despite Peter’s brusque reception and response to Christian beliefs, Kelsey later had the opportunity to open his home to Peter who was going through personal difficulties. Peter inadvertently became an observer of the weekly youth group meetings held in Kelsey’s home, and over time, the peace of God came into his heart. He requested to be brought to church where he responded to the altar call, and is today serving as the senior pastor of one of Australia’s largest churches.

“This is transformation—God is real; He is in the ‘opening of eyes’ business.”