Bowled Over By Success

Singapore national bowling coach, William Woo, who is an integral part of our nation’s sporting success, received the Coach of the Year 2010 award from SBF. 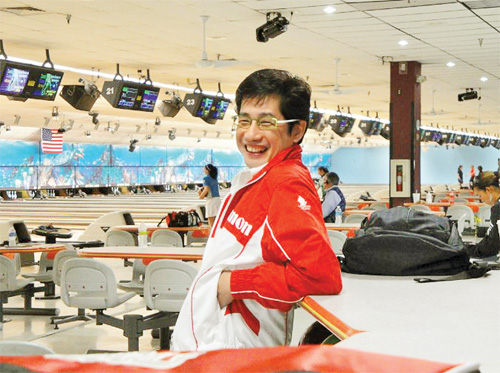 City Harvest Church member William Woo was named Coach of the Year 2010 at the Singapore Bowling Federation’s annual dinner early this month. The 50-year-old has been the national team’s head coach since 2006 and last year led the team to net one gold, three silvers and a bronze at the Asian Games in Guangzhou, China.

Speaking to City News, Woo said he was surprised by the win but counts it a blessing. “Coaches are constantly required to deliver results and it’s good that we do receive some pats on the back. I am grateful for this pat on my back,” he said.

The youthful-looking father of three first got hooked on bowling in 1980 during his National Service days. He recalled how he would join his older brother and his friends during their weekly weekend bowling sessions at the then Jackie’s Bowl Orchard which has since been developed into the Cathay Cineleisure Orchard. “From then on I fell in love with bowling and drove myself to learn as much as I could about the sport through books, videos, coaches and fellow bowlers,” he said. “It must have been the excitement and joy of mastering the different bowling skills, the satisfaction of continuously knocking down maximum pins with each throw and getting higher and higher scores.”

Being so in love with the game, he decided to work in the industry when it was time for him to step into the working world. In 1982, he started work at a shop selling bowling equipment and accessories and learned the skill of making customized bowling balls before he moved on to manage the lanes and bowling center. Eleven years later, he started his own shop which eventually expanded to three locations. Between 1998 and 2005, he leased and managed a bowling center at Jalan Sultan and  completed a couple of modules in sports psychology. Always hungry for more knowledge, Woo is planning to embark on his pursuit of a psychology degree next year.

Besides building his career during this period, Woo also represented the Singapore National Team from 1987 to 1991. His best game to date was when he bowled a game of 12 strikes in a row, resulting in a perfect score of 300 pinfalls. In the five years he was with the national team, he won the Johor Open, the Penang Open, a silver medal at the Jakarta South East Asian Games in 1987 and a number of other local tournaments.

It was during the Penang Open that he discovered his potential for coaching. He recalled how the lane conditions for the tournament were particularly difficult and his normal strategy was not enough to earn him a spot in the finals. But midway through the competition, he adapted his game with a different ball release which somehow worked well with the lane conditions. “This opened up my view of the game and it was this desire to know how I managed to change and adapt in the middle of a competition that got me into coaching,” he said.

Woo attended coaching courses over the years and went into full-time coaching in 1995. “I was very passionate about the sport and wanted to develop myself further through coaching,” he said, adding that the opportunity came in 1995 when Singapore engaged a new national head coach-cum-director of coaching, Mike Boroskae.

That year, Woo joined the federation and served as the national assistant coach, putting himself under Boroskae’s mentorship. The following year, he was promoted to national coach. In 1996, he was named Coach of the Year. Thereafter, he went on to work as a technical director and a bowling clinician to develop bowling coaches in Singapore and around the world. In 2005, he rejoined the federation as the national youth team’s head coach. From 2006, he has since been coaching the national team five days a week.

Asked what his coaching philosophy is, he said he believes in the acronym T.E.A.M. ­—Together Everyone Achieves More. “The hardest thing about being a good coach is having the ability to balance the task and emotional needs of every player,” he said.
“As a player, I focused on my individual development;  but as a coach the focus is on the team’s development,” he shares. The national team has bonding sessions, such as Outward Bound camps, team meals before and after training, and social activities such as ice skating and BBQs to help develop team spirit and trust.

Woo says, “Part of my job is to get all the individual bowlers to have a ‘team before self’ attitude in our national squad. One of the instruments we use to build that attitude is through the selection criteria for competitions—bowlers must fulfil the ‘team first’ attitude.”

Tips from Coach William Woo
Bowling is a seemingly simple sport; after all, how difficult can rolling a ball get? But it is deceptively technical and not easy to master at all. Coach William gives three tips to help aspiring bowlers knock down more pins.

1) For your first bowling ball, pick a plastic or entry level reactive ball rather than a top range one as they are easier to handle and will make your game more enjoyable.

2) With a custom-fitted ball, most can carry a ball that weighs one to three lbs (0.45 to 1.36 kg) more than those borrowed from the bowling center—so go for a heavier ball.

3) Focus on putting the ball in the direction of your target; this is key to eliminating unnecessary compensation during the delivery.

4) Strengthen those core muscles as this will help bowlers to be more stable in the finishing position, and will greatly improve consistency.