Joyce Leong, mother of two and the founder of the JoyRiders cycling club, is the epitome of a healthy lifestyle. 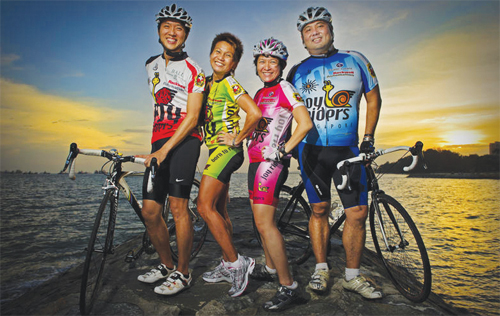 You might have noticed a tanned, spunky-looking woman smiling at you from a National Healthcare Group poster on your way to the MRT every morning, with an adventurous glint in her eyes and short cropped hair straying out from underneath a bicycle helmet. Her name is Joyce Leong, founder of the cycling club, JoyRiders, whose members embark on cycling routines around Singapore before the breaking of dawn almost every other day.

Leong was selected as one of NHG’s Caring It Forward ambassadors not just for her healthy lifestyle, but for helping others lead an active life. The avid sportswoman started cycling when years of taking part in triathlons and running took a toll on her back and made it hard for her to run—initially, it was just her and a few friends, but since 2003, that little circle has grown into an 800-strong club of cycling enthusiasts, with members ranging from students to those over 60 years old. The club also occasionally organizes overseas cycling expeditions.

Leong herself is a heavyweight in the sporting arena. She represented Malaysia in the SEA Games for cycling, participated in the Moscow Peace Marathon as well as the Peace Run around the world back in 1986. Apart from cycling and running, Leong even plunged herself into adrenaline-charged sports such as scuba diving, car rallies and hashing (a non-competitive cross country running sport whereby a few runners run ahead and set a course marked by toilet paper, chalk or white flour for the other runners to follow).

Prior to cycling full-time and being married to her husband, Michael Griffin, Leong held a day job in advertising sales and marketing. Today, the mother of two girls, Jade, 17 and Jasmine, 15, has no intentions of slowing down, cycling six times a week.

Which was the most adventurous, memorable outdoor experience for her? “Taking part in the first AXN Adventure Race 2003 in Malaysia with two other girls. The race, which we eventually won for the ladies category, was over seven hours long. We had to run, mountain bike, rock climb, abseil, rappel off a building and rope across a river. This was the most memorable race because I don’t like heights!” Leong shares with a laugh, saying that she turned into “jelly” while hanging on the edge of a cliff.
“JoyRiders is not just [all] cycling but it’s a group of people who take care of each other during the rides. New riders will be taught to ride safely and share the road with other road users. There is also synergy within the group when it comes to work and networking,” Leong asserts.

“Along the way, we make many new friends. It is really great to be able to interact with people of all ages and the best part of it all is that we can all ride together, whether we are young or old, rich or poor!”

What are the keys to maintaining an active lifestyle? “Commitment, dedication and your own passion—it may or may not be cycling. Health is wealth in the long ‘ride’!” Leong says.

If you’re interested to join this dynamic cycling group or find out more about their cycling routines, visit www.joyriders.sg for more information.