Reigning diva of the Cantopop scene returns to Singapore with a big bang. The rain did not deter throngs of fans—both teenagers and older folks alike, from making their way to the Singapore Indoor Stadium on Saturday night, Nov. 6 to catch Cantopop superstar Sammi Cheng in the Singapore leg of her Love Mi More World Tour. Having attracted more than 8,000 fans in her concert earlier this year, Hong Kong’s most beloved diva exceeded all expectations with an even more stellar performance this time round.

Having 10 sets of flamboyant, eye-catching costume changes in between fast-paced songs and melodious ballads, Cheng mesmerized all with her much-loved hits such as “Zhi De” (“Worth It”), “She Bu De Ni” (“Missing You”), “Tian Yi Wu Feng” (“Seamless”), “Chi Chi Wei Ni Deng” (“Waiting For You”), “Cheng Nuo” (“Promise”), “Wo Ying Gai De Dao” (“I Deserve”), “Wei Du Ni Bu Ke Qu Dai” (“You Are Irreplaceable”) and “Zui Yu Fa” (“Forgiveness”), amongst others. 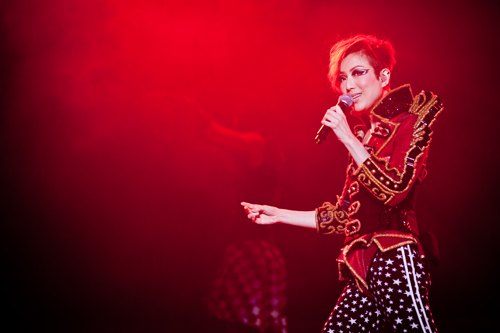 Having established a two-decade-long career in movies, drama serials and music album, the chameleon of Cantopop returned from a hiatus, looking significantly refreshed and recharged. Donning a red wig, flashy masquerade costumes and elaborate head gears, the charismatic diva’s flashy outfits were no distraction to her vocals, which reverberated with much emotion and sincerity as she transited between fast and mellow tracks effortlessly. Needless to say, it did not take her long to get the evening into a natural momentum.

Accompanied by a live band and a team of energetic dancers, Cheng grooved and danced her heart out to many of the fast-paced songs. The night also saw exuberant cheering and enthusiastic screams from the crowd, especially from members of Cheng’s fan club, who all donned identical “Love Mi More” T-shirts.

The audience was also treated to a medley of English songs by the queen of Mandopop herself which included the anthem of empowerment “I will Survive,” “Can’ Take My Eyes Off You,” “Designer Music” and “Conga.” The Christian references in some of Cheng’s new pieces were a reflection of the superstar’s newfound faith after she battled bouts of depression in during 2005 and 2006 and became a born-again Christian.

While the pop diva has once said in an interview that she cannot stop working due to the high pressure from the entertainment industry in Hong Kong, Cheng appeared energetic and upbeat, wowing audiences with her complicated dance moves. Cheekily flexing her muscles, she winked, waved and flirted with the audience. There was, however, no mention of any reconciliation with old flame and fellow Cantopop star Andy Hui during the three-hour long concert.

As the concert came to a close and Cheng disappeared offstage, chants of “Sammi, Sammi, Sammi” echoed the stadium as the crowd willed the superstar to make a re-appearance. Expectedly, Hong Kong’s most beloved diva re-appeared much to the delight of the audience who waved light sticks and sang along to the seven additional songs that Cheng belted out. It was indeed a spectacular night where Cheng integrated fashion and an eclectic range of musical styles, from electro to pop and retro rock, into an enthralling and dramatic spectacle.