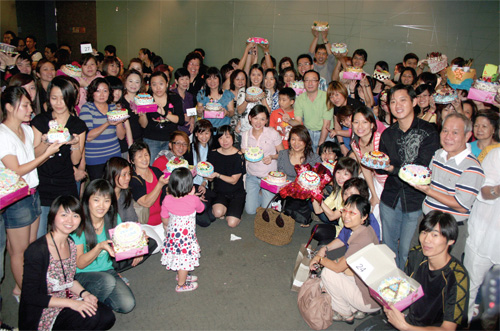 Five weeks have passed all too quickly for members of City Harvest Chinese Church. The annual Wu Da Huan Xi (“Five Weeks Of Joy”), which began on Sep. 19, was rounded up with a grand finale held on Oct. 17 in Pioneer Spring Restaurant at SAFRA Mount Faber.

Last year, CHCC organized a successful five weeks of after-church activities where members invited their family and friends every weekend after church to take part in various events and activities. Following its success, this year’s event, themed “Family,” saw members displaying not just their talents, but also their love and support for fellow brothers and sisters in Christ.

SONGS FROM THE HEART

Before the actual launch, the CHCC drama ministry members staged a two-part trailer to introduce the congregation to the exciting activities that awaited them. Two CHCC members, Yong Kuan Wen, 36, a laboratory technician, and Allen Yu, a web designer, each wrote songs just for the occasion. Yu penned lyrics that conveyed the message of the church being a place where believers can grow together as a family and encourage each other through difficult situations in life. Yong wrote his song titled “We Are Family” in the hope that “we can all be encouraged and inspired by one another to live out a life that displays the talents and gifts given to us by God; and become a blessing to others.”

That was essentially the purpose and objective of Wu Da Huan Xi. During the five weeks, members were not just given the chance to display their talents, but also the opportunity to work together as a team to produce creative results.

Coinciding with the launch of Wu Da Huan Xi was the Mid-Autumn Festival and organizers took advantage of the occasion to encourage the members to bring homemade mooncakes. Taking up the challenge, members came with uniquely-flavored mooncakes such as champagne, mango and even durian. One lady creatively added generous fillings of fresh strawberries into the mooncakes she made. But when it came to thinking out-of-the-box, social worker Jessie Lum won hands down and received nods of approval from the organizers. She designed her mooncakes in the shape of a fish. Organizers were pleasantly surprised by the enthusiasm of the participants.

During the second week, the members divided themselves into their three zones and held their own after-church luncheons at various locations. The luncheons featured a buffet line, performances and activities to keep the children occupied. One of the zones also organized a flea market where members could bring various items to be put up for sale.

Other activities of Wu Da Huan Xi included a Do It Yourself cake decorating contest as well as an Original Recipe contest. For Lynn Wong, 29, a consulting manager, the DIY cake decorating contest was most memorable for her and her cell group members. She said, “For this contest, we spent a lot of time at one of our homes brainstorming and thinking of the most innovative way to decorate a cake. We also had to prepare all the ingredients necessary for the cake itself and the decorations.
At the end of the day, we all recognized each other’s efforts, further reinforcing that everyone has a part to play in the family of God.”

In the third week, a telematch was held. Organized in two categories—family and open categories—the telematch, held at a basketball court in Jurong West, saw individuals in groups of three competing to perform tasks such as finding sweets in a box full of flour and transporting water from one point to another using sponges or paper cups that had holes. It was heartening to see families working together to accomplish their goal to reach the finish line. One family displayed unity by turning up in identical orange jerseys with their names printed.

All in all, the five weeks had proven that it was not about winning a contest or attending all of the events—it was all about “focusing on building stronger relationships in the process,” said Natalie Teo, administrative officer of CHCC. The five weeks culminated in a gala dinner held at Pioneer Spring Restaurant. During the dinner, attendees were treated to a live sand art performance by sand artist Erika Chen. There was also a quick ballroom dance lesson for all who wanted to dance.
However, the main highlight of the night had to be the manhunt and beauty pageant. After two weeks of intensive training, 16 contestants, selected from close to 100 participants, walked down the red carpet to show the crowd why they were “the best.”
Lin Shao Yan, 23, who was crowned Miss Popularity,  felt that “winning was secondary.” Most importantly, contestants learned the true meaning of teamwork, especially through all the training and rehearsals they have been through as a group.”

She related an incident of how one of the contestants lent her accessories to those who did not have any, helping to enhance the overall presentation of her “opponent.” Another contestant drove everyone home after a late-night rehearsal. “It feels great to be part of this wonderful family,” said Lin. Winners of the manhunt and beauty pageant: About 50 individuals battled it out for three weeks in the Chess Championship. Busting the common notion that this age old game is only for elderly gentlemen, young ladies also joined in the championship to vie for the winning title. Huang Xin Bo, a technician in his late twenties, emerged as winner. In the Fashion Design Competition, the winner, Janet Chong, 26, an administrative assistant, impressed judges as she redesigned a plain black number by adding a flower to it. The touch was just right. Chong later wore the winning dress to the finale dinner.

Kelvin Wang Zai Lin, a senior technician in his late twenties, saw this wall mural in a shopping mall and decided to snap a picture of it. It turned out to be the winning entry for the Funniest Photograph Contest.

The Best Home Video Contest saw an impressive production made by Ian Lim, 28, a draughtsman, who conceptualized, shot, and edited a video on how when it comes to love, actions speak louder than words. The video had a good storyline but what impressed the judges most was the quality of work produced despite the lack of professional
equipment.

Most importantly, what showed through were the teamwork factor and the support of Lim’s cell group members who stepped in and acted in the production.

The Collage Board Design Competition saw individuals bringing a chosen memento representing their favorite moment with their family throughout the five weeks. Together as a cell group, everyone then had to piece together these photos or souvenirs into a collage and create a meaningful story or testimony from it.

Ni Wo Zhi Duo Shao (How Much We Know)

During the Ni Wo Zhi Duo Shao (How Much We Know) segment, participants were quizzed on grueling questions such as the shoe sizes of their teammates and which vegetables their teammates liked best. A team of three friends emerged as winners, beating groups made up of family members.