In the midst of all the end-of-year examination preparations, the Children’s Day holiday on Oct. 1 was a welcome breather for many students and an opportunity to enjoy a break from school work. To celebrate Children’s Day, City Harvest Children’s Church organized a series of celebration bashes to spur the children on in their studies, and to allow them to have some time to relax. After all, as the saying goes, “all work and no play makes Jack a dull boy.”

This year, CHCC celebrated the occasion with a jungle-themed party­—Wow Wild World. Held on Sep. 29 and Oct. 1 at City Harvest Church’s Jurong West Street 91 premises, and on Oct. 2 at the Singapore Expo Hall 8, this year’s Children’s Day parties saw the young, and the not so young, having a roaring good time.

A total of 6,586 children attended (with 3,228 who responded to Jesus Christ as their Lord and Savior), the event at different venues on different days, the children were treated to a galore of fun, games and excitement.

There was a buzz of anticipation as children stepped into the halls and were captivated by the jungle-themed decorations. Before the party even got started, screams of delight could be heard when the children caught sight of the popular animal mascots. The mascots were “mobbed” by eager children wanting to slap high fives with them, or simply just to hug them. One volunteer was overheard commenting, with a smile on her face, “It is so ‘chaotic’ here, but in a good way!”

Celebrations were underway with the introduction of the “Wild Grab Booth.” With prizes such as vouchers, school bags, stationery sets, card and board games, and even bicycles and the wildly popular “Animal Kaiser” cards up for grabs, participants worked extra hard to catch coupons as they flew about in the “Wild Grab Booths.” What made the game more exciting was that they had to grab as many coupons as they could within a stipulated time-frame. Badges were given out toward the end of the party to reward the most enthusiastic, attentive and excited children, for a chance to test their reflexes in the eight booths.

Following the performance of “Who’s The King?” by CHCC’s volunteer teacher, Adrian Cheung, and the animal mascots, the children were divided into two teams, “Powerstars” and “Superstars.” Both teams had to out-cheer each other in games and win as many points as possible. Children from each team were selected to go on stage for a game of Musical Chairs against the cuddly animal mascots. Being adorable and cuddly proved to be of no use as the children “ruthlessly” eliminated the mascots from the competition in no time. Next, each team cheered on their representatives with multi-colored light-sticks and raucous cheers as they raced against each other in a present-stacking game, with the added motivation of getting to take home a present. 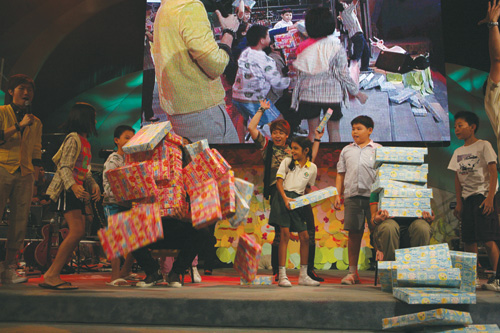 After the fun and games, the children settled down enough to enjoy a performance by J7, CHCC’s resident pop group. Channelling the spirit of popular TV show Glee, J7 gave a show-choir-inspired performance of the revisited Journey hit, “Don’t Stop Believing.” The children sat enraptured by the high-energy performance. Performances by award-winning magician Joe Yu and Aaron Leong, better known as his stage persona Mr. Funny then took centerstage to captivate the children with their unique brand of stage magic. In line with the “Wow Wild World” theme, Yu delighted the audience with a magical line-up of little animals such as birds and even an adorable white rabbit. Members of the audience had their chance to perform a little magic as well when Yu went down-stage to interact with them. The performance elicited gasps of amazement and laughter as Yu pulled off several breath-taking tricks one after another. On the other hand, Mr. Funny had the audience in stitches with his hilarious ventriloquism act and his special brand of “Funny Magic.” With such a joyous atmosphere in the air, it did not take much for the children to get on their feet and start praising God. It was the very picture of exuberance and excitement as the children were clapping and waving their hands, and jumping around and dancing as they sang praises to God. The auditorium was filled with a sense of raw sincerity and sweetness of spirit as the atmosphere quietened down and the children began to worship God. With hands raised in worship, the love for God that the children had was evident in their outward expressions.

Following the worship, new friends were cordially welcomed and the children were informed about the upcoming events in Children’s Church. The kids’ band took to the stage to present a song from their sophomore album, God Of My Universe.

This prepared all the children present for the upcoming Bible lesson. Done in a quiz show format akin to Who’s Smarter Than A 5th Grader 2010?, the Bible lesson was thoroughly engaging as familiar personalities like Singapore’s favorite contractor Phua Chu Kang, Wing Chun master Ip Man, the clever but zany Professor Nutty, and nursery rhyme character Mary, who had a little lamb, took turns to go on stage and share their perspective of God’s love. Through their stories, the children were taught about God’s love which is immeasurable, unbeatable, puts us over the top, and never gives up. Following that session, the children were given the opportunity to receive Jesus into their lives.

The end of the Children’s Day celebrations was signalled with the distribution of a Children’s Day gift to every child present. Everyone was seen leaving the party with smiles on their faces: children, parents, teachers and volunteers.

Phoebe Kang, a housewife, brought an entourage of kids to the party on Oct. 1 at the Jurong West premises. “They enjoyed themselves very much,” Kang said, while looking fondly at her excited son, as well as her niece and nephew, who were joining the Children’s Church for the first time.

“It was very hectic, but also very fulfilling and satisfying, to see the kids enjoying themselves so much,” shared Eileen Neo, a 18-year-old student from Ngee Ann Polytechnic who was distributing the gifts to the children. Her friend and schoolmate, Yann Ni, 18, echoed her sentiments, saying, “All the effort was worth it.”