As part of continuing efforts to improve on structure, governance and accountability, CHC names the chairman and advisory pastor of its advisory committee. At its weekend service last week, senior pastor of City Harvest Church Rev. Kong Hee announced that Dr. A.R. Bernard of Christian Cultural Center and Pastor Phil Pringle of Christian City Church will serve on the church’s advisory committee, which is being set up these few weeks.

Neither are strangers to CHC; both Bernard and Pringle have been long-time friends and guest speakers
at the church, preaching at least twice every year for well over a decade.

“Since the early 1990s, the church has always benefited greatly from the assistance and advice of external pastors and ministers,” Kong told the congregation at the four services, naming Elder George Ong from Church of Singapore, Rev. George Ee from Calvary Charismatic Centre, Dr. Kevin Dyson from New Covenant International and Dr. Ulf Ekman from Word Of Life among past advisors.

“However, while CHC had benefited greatly from the wisdom and experience of such pastors and paid due respect to them, there was no structure or arrangement in place to formally acknowledge them. In 2007, provision was made for this with the proposal for a board of independent advisors, but this board had not been staffed until now. 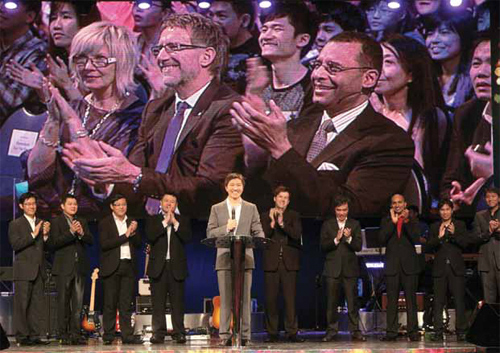 “If there is anything I’ve learned through the process of this investigation, it is the need for a greater level of accountability and governance in the operations of City Harvest Church,” explained Kong, before announcing that Bernard and Pringle, “two men whom we all respect greatly and have the heart of CHC, as well as the expertise and experience to serve in this capacity,” had agreed to formalize an advisory committee to serve CHC.

Bernard will assume the role of chairman of the advisory committee. A former Wall Street banker, Bernard oversees the 33,000-member Christian Cultural Center in New York. He is also currently the president of the Council of Churches of the City of New York. He sits on the New York City Economic Development Corporation Board, and is a member of the Debt Reduction Task Force for the U.S. Senate Budget Committee.

“Most importantly, Dr. A.R. Bernard is a great friend and a strong supporter of our vision, mission and core values of CHC,” says Kong.

Pringle will be appointed advisory pastor to CHC. He is City Harvest’s oldest friend, having supported the church “since there were 200 people in a warehouse [the size of the Expo auditorium].”

“As the Chairman, Dr. Bernard has agreed to come help us once every two months, while Pastor Phil will be coming once or twice a month,” announced Kong. “Both of them will be assisting our pastoral ministry in the planning, organizing, initiating, promoting, coordinating and reviewing of the worship, religious education and mission activities within the church.” The church may consider additional appointments to the committee when appropriate or when the need arises.

Kong’s announcement drew enthusiastic applause and cheers from the congregation at all four services.

“I thought that the announcement was a clear demonstration of what our leaders stand for—accountability and unity. To be able to open ourselves to ideas, opinions, checks and balances is not only the wise thing to do but the right thing to do,” commented church member Bernard Lim, 47, a financial educator. “At the same time, the demonstration of unity among the brethren, standing together in a time of need, fleshes out what we have been talking about. CHC is witnessing both leadership-by-example at work and what being a Christian truly means.”

“I am glad they are setting up the advisory committee,” said Vivienne Ho, 42, an insurance broker. “I’m very touched by Dr. Bernard and Pastor Phil’s great sacrifice for our church. This is a heavy responsibility and they have their own churches, not to mention the fact that they live overseas. For them to be here every month is a very serious commitment.” “We Place CHC As A Priority”

Pringle shared with City News the reasons why he said yes to this new role. “First, when Kong asked me, I said, Let me go and pray about it. And I did. I also talked it over with [wife] Chris, and we talked with our leaders. I felt peace and they felt right about it, so I have to conclude that God has guided us.

“Second, Kong and Sun and CHC are dear to us. We have a long history. There are some friends you would lay down your life for, and they are two of them. God gives you only a few divine connections in life. Do whatever you can to ensure these connections serve God.

“Third, this church is important to the world today. It is a great church builder and planter. It has been a leader in showing people in Asia and the world how to do church. It is holy, pursues purity, keeps the Word of God—it does not compromise on these issues. But it is contemporary and relevant in the world, not only being acceptable but leading in the marketplace.”

Bernard shares Pringle’s commitment to Kong and CHC. “I believe in the work and ministry of Pastor Kong and City Harvest,” he told City News. “And our loyalty is tested in times of crisis. Whether we will stand or abandon our important friendships … [and] I don’t believe that God ever abandons the work of His own hands.”

These new roles mean some measure of sacrifice for both ministers. Pringle shared that this commitment will take him out of church six more weekends than in a normal year. “We have a really good team in Sydney with a lot of rising leaders,” he said. “We feel confident that [the church will] be in good hands.”

As for his network of nearly 300 C3 churches throughout the world, Pringle said that he would be able to maintain constant communication with them. “The only other area that may cost is my availability for preaching and weekend events around the world,” he admitted, “but I should be able to take midweek conferences.

“We place CHC as a priority—it takes priority in our schedules and resources.”

While Pringle consults on day-to-day matters, Bernard’s role is macro, aimed at strengthening the governance and structure of the church. “I want to do everything to make sure the church is strong, and spiritually, emotionally and psychologically prepared to embrace the exciting future that God has for CHC,” explained Bernard.

He expressed his agreement with Kong that there is an urgent need to take the leadership, governance and operations of CHC to the next level. “We are considering the best way at this point to ensure longevity and perpetuity of the ministry.”

The objective behind his involvement is to “bring the church to a greater level of efficiency and effectiveness. By efficiency, I mean great accountability and focus in the financial management of the church. By effectiveness, I mean reaching the specific and agreed-upon goals and purposes of CHC.”

At service, Kong told the congregation: “By the grace of God, we have done remarkably well as a church in the past 21 years. We now look forward to building on the gifting, anointing and wisdom of these two men of God as members of our advisory committee. They have both been mentors to me and my wife Sun. They will now strengthen and add to our spiritual DNA. Through their independent perspectives, they will bring fresh and novel ideas to build up our church in the years to come.”

With support from Bernard and Pringle, CHC is bracing for a time of change that will prepare it for the next level. “The whole advisory committee is about making the congregation feel safe and assured,” Bernard added. “It is not to be perceived that we are coming over and turning it into something else.

“We are accepting responsibility for the future of the church.”