The Journey of the Youth Olympic Flame kicks off to a great start. 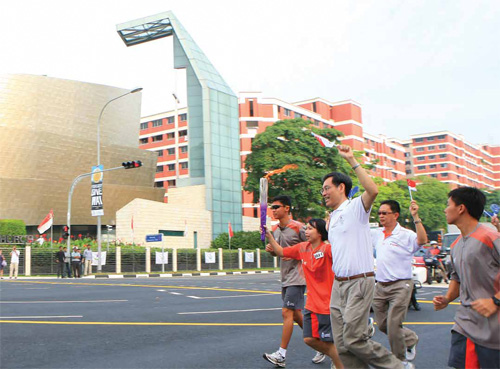 Early that morning, the students had assembled on the school lawn, patiently awaiting the arrival of the Flame as performances by the school choir and dance club took place in the presence of Guests of Honor, Dr. Ng Eng Hen, Minister for Education, and Dr. Vivian Balakrishnan, Minister for Community Development, Youth and Sports. On hand to motivate the crowds were the YOG mascots Lyo and Merly, who made their grand entrance amid raucous cheers from the students.

Upon the arrival of the Flame in a safety lantern, there was a sense of heightened anticipation among the crowd, as the students got up on their feet and cheered. It was then that the first few drops of rain were felt. The torch was lit and passed on to one of the school’s netballers, the first of eight torchbearers from CHIJ Toa Payoh.

Over the next six days, 2,400 torchbearers will bring the Flame to different parts of the island. Of these, over 800 are students from national schools and institutes of higher learning. Dr. Ng remarked, “They have been selected because they embody and exemplify the Olympic values of Excellence, Friendship and Respect.” As the Games commence, over 6,000 students will be volunteering in different aspects.

Pointing out the significance of the day’s events, he continued, “Through this inaugural Youth Olympic Games, Singapore and our youth are making the future. We set the path and standards for others to follow. As a member of the community, you can get involved, and make an impact in your own lives as well as that of others around you.”

As the torch made several rounds on the school’s running track, the rain had already started pelting. Not to be swayed from witnessing the momentous event that was unfolding in front of their eyes, the students whipped out their ponchos and continued cheering– for their torch-bearing schoolmates.

The torch relay officially took to the road with Elim Chew, one of three recently appointed members to MediaCorp’s Board of Directors, also the founder of streetwear chain 77th Street and co-chair of the Programming Committee for *SCAPE under the Ministry of Community Development, Youth and Sports (turn to page 10 to read about her torchbearing experience).

Among the other torchbearers that day were Rui Jie Wesley, 14, an equestrian who has been riding with the Riding for the Disabled Association for eight years. Thanks to a never-say-die spirit and a positive mindset, Rui, who suffers from Autistic Spectrum Disorder that affects his motor skills, now competes alongside able-bodied athletes in interclub competitions.

A heart for youth at risk was what earned Muhammad Fadylla Rashiman, 27, a teacher at Boon Lay Garden Secondary School, the honor of being a torchbearer. The winner of the Outstanding Youth in Education Award 2010, Rashiman, who is a mentor under his school’s “Adopt-A-Child” program, had volunteered to coach the Singapore Combined Schools’ Sepak Takraw team, which eventually won the bronze medal at the ASEAN School Games in 2009 in Thailand. Other torchbearers that day included MediaCorp artistes Zheng Ge Ping, Joanne Peh, Randall Tan and radio deejay Shan Wee.

Having traced the Northern part of the Central Singapore District, from Toa Payoh to MacRitchie Park, past Bishan and finally to Ang Mo Kio, the torch relay ended at 7 p.m. that day at Nanyang Polytechnic. A cauldron lighting ceremony took centrestage during the community celebration, presided over by the Guest of Honor, Prime Minister Lee Hsien Loong.

By Aug. 12, the torch had reached the West of the island, where the torch relay passed by Nanyang Community Centre and the City Harvest Church building on Jurong West Street 91.

The whole journey of the Youth Olympic Flame will cover a 305-kilometer relay route with a 500-meter long convoy in tow. The relay will culminate at Marina Bay Sands on Aug. 13.