Members of Parliament share how women in Singapore can thrive in today’s society. 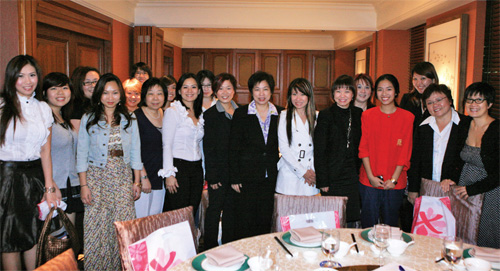 Sticking to its vision to serve as a platform for women to come together, non-profit group Women Make A Difference hosted a dialog session that saw 30 women from various industries coming together to discuss issues close to their hearts. The session, which was attended by Members of Parliament, Mrs. Lim Hwee Hua and Ms. Ellen Lee, saw a lively banter over dinner.

A wide range of issues from work-life balance concerns to sharing the burden of parenthood was freely discussed over a sumptuous dinner at Tung Lok Group’s Noble House on July 8. Conversation topics sprung up freely at the different tables as each individual shared her concerns, thoughts and experiences as a woman in modern-day Singapore.

One topic that consistently arose throughout the night was the tension rising from balancing the multiple roles of  mother, wife and employee at the same time. Asked about how she manages that effectively, Second Minister for Finance and Second Minister for Transport, Lim, revealed that the key is setting priorities.

Juggling between her various roles as elected Member of Parliament for the Marine Parade Group Representation Constituency and appointed advisor to the Serangoon grassroots organizations, Lim expressed that at various points in a woman’s life, she needs to change and modify along the way.

One other pressing issue concerning many Singaporean women is discrimination they experience at work, particularly the difficulty of re-entering into the workforce after taking a break to have children. That, coupled with losing touch with the working world, has lowered the confidence levels of most women, ultimately deterring them from reentering the workforce.

Drawing from her own experience of placing her career aside in order to dedicate her time entirely to her children, one woman shared that she had to mentally prepare herself to work for younger bosses when she re-joined the workforce. She was also faced with the challenge of catching up as fast as she could within a short period of time, working doubly hard to grow accustomed to the changes in the marketplace.

In response to the topic of biases against women in the work place, it was established that biases may be ever present, but rather than gripe about it, both men and women should be prepared to continually upgrade themselves in a knowledge-based economy where there is much emphasis on brain power.

Besides issues concerning the workplace, high divorce rates, as well as the increasing incidence of single parenthood were also discussed. The participants discussed weighty issues such as the financial sustenance of single parents and the viability of imposing higher taxation on the general public were addressed.

Many of the evening’s attendees asserted that the burden of both single parents and parents alike could be eased by being able to enjoy greater childcare assistance, such as better childcare facilities built by the state. Some felt that grandparents these days are less willing to look after their grandchildren, and there is a shortage of infant care facilities in Singapore. As a result, many couples are delaying their plans to have children.

However, the need to increase childcare facilities must be cautiously balanced with providing a conducive environment for children to grow up in, since parents have lower impact on their children’s lives as a result of outsourced child-care. Many mothers in the room also voiced their doubts and insecurities over the quality of childcare teachers. All these factors have led many women to forgo their careers, thus leading to a certain degree of resentment toward the government for an ineffective childcare system.

The stress arising from balancing a full-time job and the heavy responsibilities of motherhood can be combated by greater flexibility in the workplace. Attendees expressed that it would greatly help if employers move away from the traditional mindset that workers must be present in the office to get work done. Rather than focusing on the number of hours worked, employees could be assessed based on their produced results.

An increased flexibility in employment terms, together with greater trust from employers, would enable women to work from home so that they need not necessarily give up their careers to raise their children. Many at the dialog were supportive of such a measure though some had doubts concerning the actual implementation of such greater flexibility at work.

Other than touching on concerns that are particularly unique to the female gender, general issues pertaining to the Singapore citizen were addressed. Many of the women said that they are pressured by the demands of a cosmopolitan city, in which they find it difficult to lead a balanced life. Similar to how pressures from the family have intensified over time, expectations from the work place have likewise increased, causing the modern individual to be plagued by stress from all sides.

Though there was no “magic pill” solution, the dialog provided a platform for women to share their concerns. Many were comforted by the knowledge that they are not alone in their concerns, and the fact that other women had similar experiences.

Besides tackling family and work place issues, the area of the arts was also covered. Mothers in the group spoke about their observations of over-enthusiastic parents registering their children for a multitude of enrichment classes, from ballet to piano lessons.

While most acknowledge that such enthusiasm helps to create an environment that promotes the arts, the genuine intentions of the children undergoing these classes were questioned. Many mothers observed that participating in too many classes has a detrimental effect on the child. In response to that, some voiced the need for parents to continually balance their personal motivations with the well-being of their children.

The session progressed onto a more intimate note with questions regarding the demands of a public figure. Lim spoke about her desires and motivations of getting involved in politics, “I felt that I wanted to give back to society and doing that meant that I had to step out of my comfort zone.” Having to get down to the ground level to personally interact with the public is tiring but the fulfillment that comes from helping them out of their struggles rewards her at the end of the day.

Asserting that financial problems are the tip of the iceberg and that there are many other issues at bay affecting Singaporeans who struggle to make ends meet, Lim expressed the need to understand the uniqueness of the situations faced by any particular individual.

Rounding off the session with how women can find a place for themselves in a fast-paced modern Singapore, Lim said, “As we become more cosmopolitan, we have to define ourselves beyond economic terms.”