A hub for youth to express themselves. It took over two years to materialize from an idea, but SCAPE, a hub specially built for youth between ages 15 to 25, is now up and running. To celebrate the launch of SCAPE, a two-day festival was held at Playspace, and what a party it turned out to be.

At Playspace, the outdoor arena next to the SCAPE building, street-performers, fire-breathers, jugglers, balloon sculptors and even a few uni-cycle riders displayed their skills around the arena, mingling with partygoers who were there waiting for the main activities to start. Right in front of the arena stood an enormous, concert-sized playstage, a permanent fixture at SCAPE for a monthly youth talent showcase known as Stage Without Borders. Complete with flashing lights, heart-thumping music and a giant screen, it was a party all on its own.

The inaugural Stage Without Borders showcase took place on the second day of the festival and it featured local talents such as Romey Helven, a symphonic metal band, Groove Epidemic, a Paramore-esque band from Republic Polytechnic (frontwoman Kim is a tiny girl with a big voice) and Simply Five, a Mandarin vocal group from Ocean Butterflies Music.

SCAPE prides itself on being a hub not just for discovering talent, but for youths to hone their talents as well. “We are not restricting talents to any particular genre,” explained Evelyn Lau, General Manager of SCAPE. She added, “Come and tell us what you can do, and how you can do it well; if we think that it has potential, we can develop it into something for you.”

98.7FM, O School and Ocean Butterflies are some of the talent institutions that are housed in SCAPE. With dance, music, new media and studios readily available, youth are invited to share and develop their talent at SCAPE, providing a platform for these talented youth to be discovered by international groups such as NAT GEO Music, Channel V and Ocean Butterflies, the music company that brought JJ Lin and By2 to the world. 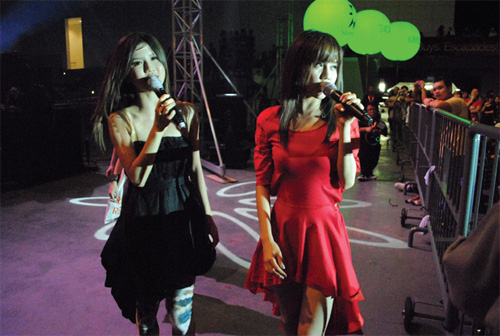 By2, a pair of Singaporean twin sisters based in Taiwan, flew in to perform a couple of songs from their new album. Only 18, but with three albums under their belt, Yumi and Miko danced and pranced to the beat of their new songs and walked down the stage to personally greet their fans.

Those who made up the audience at playspace were students from the Institutes of Technical Education, Republic Polytechnic, and more. Aside from being there to enjoy the performances, partygoers toured the new building, and took part in a flashmob.

The 502 participants sat in front of the stage, and enthusiastically jumped to their feet the moment emcees Shan and Rozz announced that it was going to be “a good night.” That was the cue for the audience and performer Sunny to get ready for the flashmob.

Peforming the song, “I Gotta A Feeling” by Black Eyed Peas, local pop act Sunny led the crowd in a feet-tapping, booty-shaking rendition of the popular hit. Starting off with just one girl dancing, the crowd moved in batches until soon, the whole crowd was bouncing in rhythm to the music. VIPs of the evening, Minister of Parliament, Mr. Baey Yam Keng, Evelyn Lau and Philip Wu, CEO of SCAPE, gamely joined in the flashmob, which incidentally, broke the record for the largest R&B flashmob in the world, comprising 502 participants.

With that knowledge, the crowd went wild and did the dance three more times, each time more spirited than the last. Though the performers were visibly exhausted, the audience had lots of energy left and when DJ Inquisitive, took the stage, the dancing began all over again.

More than just a pile of bricks

SCAPE aims to be more than just a space where youths can shop or attend classes, it hopes to become a “social retail colony.”

Lau explains, “As you eat or shop here, you are actually promoting charitable efforts.” Each partner and tenant of SCAPE embraces a charitable cause. For example, a customer who purchases green tea at Sweet Talk contributes five cents to a youth association. In Lau’s words, “While you’re spending, you’re contributing back to society.”
Most of the causes the tenants have embraced are youth causes, in line with the spirit of SCAPE. Lau believes that SCAPE is “more than just a pile of bricks, it is also a community.”

This is why SCAPE works hand-in-hand with 360 Without Borders, a platform where youth can discover more about themselves and develop a well-rounded character.

360 Without Borders is an online portal where youth of all ages can sign up for free and share their talents with the world. From musical talents to online blogging, 360 Without Borders embraces all manner of talent. Simply create a profile, add in your talent, and a blog entry describing your talent. The online community also allows users to bond with others who share the same interest.

Lau hopes that through both the SCAPE community and building the youth “will become well-balanced, well rounded people” who will become leaders of the future.

The organizers started a nationwide search for New Media Ambassadors and crowned the two winners on the second day of the launch festival.

Tan Wen Hao and and Foo Wen Xin, the male and female winners of the search respectively, each walked away with a pair of tickets each to London to catch a rock concert, a one-year mobile subscription plan with Starhub, a creative services contract and a private hall movie screening for their friends.

The New Media Ambassadors are the faces of SCAPE and will be a big part in developing and promoting the SCAPE community.

Both ambassadors were chosen on their personalities, the causes they championed, and their talent. Lau elaborated, “Besides being all-rounded in character, you should also have confidence, be savvy in technology, new media and have a heart. All of which is the substance of SCAPE. We want to develop youth with a soul.”

Both Tan and Foo have big dreams, and big causes to champion. Tan wants to help develop the youth of the world, and give them a stage to perform on, while Foo wants to help the environment.

With newly-crowned new media ambassadors, a whole new building and a two-day festival to kick-start the opening of the building, SCAPE looks set to take the youth community by storm.