Men Of The Hour

The August Man A-Listers Finals Party was an exercise in glitz and masculine sophistication. 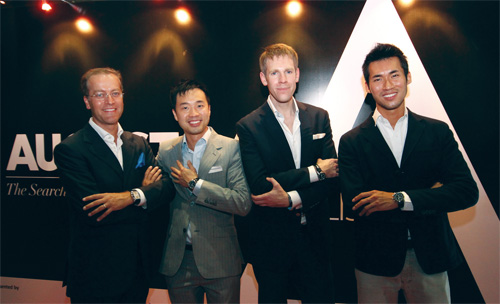 Having made a name for itself in the local magazine industry as a class-read for the new age, cosmopolitan man, August Man recently launched its online portal, AugustMan.com. In conjunction with the launch, the search was on for three gentlemen who embody style, substance and success. Amid much glitz and glamour at the August Man A-Listers Finals Party held at Balaclava, Suntec City on June 3, 12 contestants found themselves battling it out for the top three coveted positions. The contestants comprised successful men in their own industries, some of whom were entrepreneurs, commercial directors and doctors.

Free flow of drinks kicked off the event to a heady start, as the contestants were put to the test in several challenges ranging from scaling a rock-climbing wall to selecting the most appropriate male fashion attire, and even, learning how to bake a pizza. All in all, the participants were well primed to handle the “rigors” of the competition and managed to complete each required task with composure intact. Time and again, deafening screams from a largely female audience pierced the air.

The contestants took to the stage to give their individual speeches, and that was the time when the 200-odd capacity crowd launched into a photo-snapping frenzy to capture their favorite A-lister in action.

As the contestants and audience intermingled, light jazz music played in the background, giving the room a surreal feeling of being in a world of class and sophistication. The time came for the highly-anticipated moment of the evening—the crowning of the three winners. Prizes up for grabs were an IWC luxury and a chance to appear in an Augustman.com TV commercial, to be aired from June onward.

Yeo was thrilled by his unexpected win, especially in the light of other high-caliber contestants competing for the title. He added that the competition was a fruitful experience as he learned valuable life lessons and forged new friendships. Brand executive Yvonne Lee who attended the event, 25, stated, “It was truly a remarkable event, and the participation of the contestants further helped define what qualities the modern man should possess.”