CHC’s Father’s Day weekend is a reminder to appreciate and accept loved ones unconditionally. The celebration of Father’s Day last weekend was an understated yet touching affair. Church-goers first received a surprise in the form of an appearance by popular Taiwanese band F.I.R. who were in Singapore to prepare for an upcoming concert in July. The trio dropped by Singapore Expo Hall 1 on Sunday morning and paid a simple but heartfelt tribute to their spiritual father in the faith, senior pastor of CHC, Kong Hee. Each took turns to share the impact of Kong’s ministry in their individual lives, in particular the relevance of the cultural mandate message to their line of work, while thanking Kong’s wife, Sun Ho for setting an example in the entertainment industry. Guitarist Ah Qin affectionately said to Kong that they were indeed his “fruits.” As they walked down the stage, Kong and Sun stood up to embrace them, a gesture that met with resounding applause and cheers from the congregation. 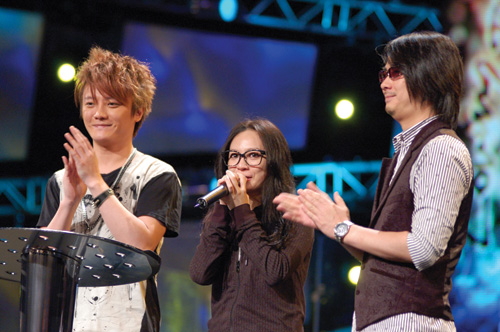 A short film entitled The Little Star was screened as a celebration of Father’s Day. The production of the 22-minute featurette was a community project, with no remuneration being paid to the actors, make-up artists and camera crew. Directed by local filmmaker Jack Neo, the storyline revolved around a single father, Mr. Tan (Ed Ong), who struggles to raise his young son Weixing (David Chew). Peppered with scenarios reminiscent of Neo’s previous movies such as I Not Stupid Too, the movie elicited much laughter, yet drove home a resounding message of unconditional love.

Full-time National serviceman Timothy Fang, 19, said that it was a “brilliant movie” and called it “a refreshing change from the usual drama [production].”

Deputy senior pastor Tan Ye-Peng took to the pulpit to deliver the service’s sermon. Drawing from the Sermon on the Mount, Tan began by reading the two Beatitudes: “Blessed are those who hunger and thirst for righteousness, for they shall be filled. Blessed are the merciful, for they shall obtain mercy” (Matt. 5:6-7).

Tan invited the crowd to picture the Beatitudes as a whole, single attitude on its own, instead of eight separate sayings. He likened the eight Beatitudes to a hamburger, where the crux lies in the two verses.

A believer filled with the righteousness of God expresses it through mercy. There are two groups of people seeking to enter the kingdom of heaven—on one hand, there are the religious Pharisees who seek to express their righteousness through judgment. On the other hand, there are the genuine citizens of the kingdom of heaven who seek to express it through mercy.

Tan cited the biblical example of Joseph, husband of Mary, who tried to send her away secretly after she was found to be pregnant before the official wedding. According to Jewish civil law, he could have reported her apparent “unfaithfulness” to the authorities; and she would inevitably be stoned to death. Yet he chose a benign approach instead of condemning her outright. For his act of mercy, the Bible calls him a “righteous man,” and it was this righteousness that contributed toward the fulfilling of the prophecies of the Savior’s birth.

Believers are taught not to let their left hand know what their right hand is doing when engaged in a charitable deed—which is essentially an act of showing mercy (Matt. 6:1-4). To allow Scripture to interpret itself, he explained what Jesus meant was found in Matthew 25:31-46. In the final judgment, the sheep would be placed on the right and the goats on the left. The righteous will inherit the kingdom of heaven because of their acts of mercy.

Tan recounted his own personal conversion experience. He used to ridicule his Christian friends for their devotion to church and was critical of their beliefs. Incidentally, he found himself involved in a Christmas event organized by CHC years ago, and was irrevocably touched and changed by the members’ acts of kindness to the old folks they were ministering to. It was not the intellectual debates he frequently engaged them in but their kindness (acts of mercy) that opened his eyes to the real message of the gospel.

“Church growth is not complicated. You just have to make sure that the people who come and stay are more than the people who leave,” said Tan, which was met with a ripple of laughter across the hall. “In order for that to happen, the church’s capacity for acceptance cannot be limited to the size of a cup, where once the liquid level hits the brim it starts to overflow as criticism. Instead, this capacity has to be enlarged to that of a swimming pool, or even better, an ocean, so that different people from various backgrounds can be assimilated into the house of God.”

Undergraduate Jeannette Soh, 22, was particularly impacted by the sermon and was inspired to demonstrate God’s love to her own father.