Living It Up At Youth Summer Fest 2010

Promoting community bonding among the young and the young-at-heart through sports, music, and all things loved and enjoyed by young people. 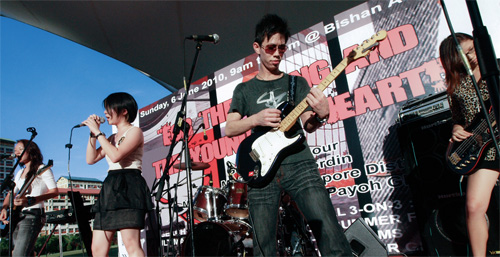 In less than two months, Singapore will make history by hosting the inaugural Youth Olympic Games from August 14 to 26 at numerous venues island wide. To drum up awareness, a youth centered, carnival-styled festival was organized by the Bishan and Bishan North Community Club Youth Executive Committees and held on June 6 at Bishan Active Park, Bishan Street 22. The guest of honor for the Youth Summer Fest was Mr. Zainudin Nordin, Mayor of Central Singapore District and advisor to Bishan-Toa Payoh Group Representation Constituency. 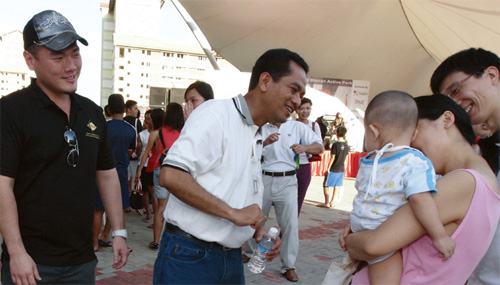 The inaugural Youth Summer Fest is targeted at youths aged 12 to 35, with the objective of promoting sports and healthy living. Organizing chairperson of YSF, Alex Wee, believes in engaging youth and giving them a platform to express themselves. Wee, who is a commercial airline pilot, says his passion to reach out to young people is what has fuelled his drive for the past eight years. Together with his team of youth volunteers, he delivered a full day event packed with a program which included 3-on-3 basketball matches, beach volleyball tournaments, Frisbee and free-play archery held in collaboration with the Telok Blangah Archery club. The series of youth oriented games were sufficient to pull in a crowd from the surrounding estate.

The YSF featured three out of 26 sports that will be competed in during the upcoming YOG. With the selected sports, namely, archery, basketball and volleyball, the YECs “aim for athletes to embrace, embody and express Olympic values of excellence, friendship and respect.” Additionally, the committee members hope to inspire the youth to imbibe the “Olympic spirit to unite diverse cultures and people” through innovative initiatives such as the promotion of youth entrepreneurship at the summer flea market. Blog shop owners were invited to hawk their wares at the nearby amphitheatre. Bands such as Bricks To The Sky, Band 8 and Pervy Boy rocked the stage with their original compositions and alternative renditions of current hit songs.

Nordin, who was in his walk-about session, was particularly “excited when the YEC first approached (us) with this series of dynamic ideas.” He was supportive of “connecting the community through sports” and in turn incorporating sports with music to become a trendy and relevant tool to reach out to the younger generation. The mayor also hoped that with the use of such “creative platform to engage youths,” young people can begin “to feel for Singapore and be empowered to grow and develop for the future ahead.” This, he hopes, will ignite and unite the next generation, upon whom the future of the nation depends.

The evening hit a high when Nordin put the finishing touches to a graffiti artwork spray painted by Killer Gerbil, a Singaporean graffiti artist. The novel use of street art proved to be an instant hit with the crowd. Another highlight for the evening was a series of short films and visual-jockeying presentation by students from the LaSalle College of the Arts.

Daphne Chua and Ng Hwee Leng, both 18 and students at the Singapore Polytechnic’s School of Communications, Arts and Social Sciences, were among the student volunteers present. They echoed that through “community involvement and participation in the games and activities,” a greater sense of awareness can be raised toward the social value of sports and healthy living amongst the young.