The Big Screen: The A-Team

I was expecting another major macho fest when my husband got all excited about The A-Team. My fears were confirmed when I ran a search on IMDB for the synopsis only to find a one-liner with few details—typical of a guy flick. 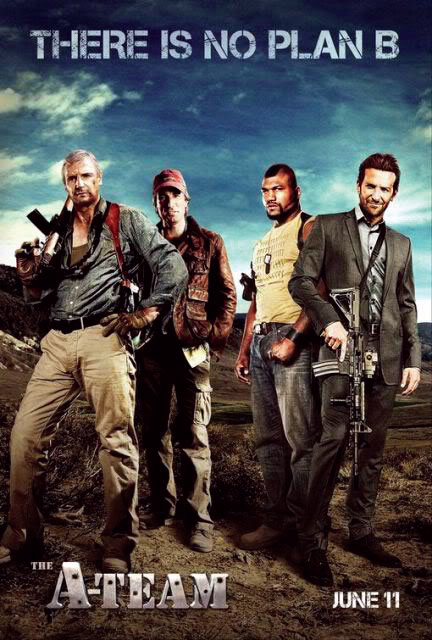 To my surprise, I found the movie highly entertaining. The movie enters right into action with Colonel Hannibal Smith escaping with finesse from two Mexicans, then gathering his team for a mission, while the credits play dramatically across the screen.

The plot is quick enough to keep the audience entertained, but what really made the movie take off is the chemistry between all four of the lead actors. Hannibal is the mastermind behind the projects, a big risk-taker yet sharp enough to ensure all his team members are intact at the end of the project. Face (Bradley Cooper) is the right hand man who comes into his own at the end of the movie, executing the plan he thought up. He also provides the quintessential love link to the gorgeous babe Charisa Sosa (Jessica Biel), the captain of an opposing team who is also his ex-lover. B.A. (Quinton “Rampage” Jackson) is the powerful driver who sports a Mohawk and develops a fear of flying thanks to his corkscrew airborne experience helmed by the last member of the team, loony pilot Murdock (Sharlto Copley).

The producers attempted to delve deeper into its characters with B.A.’s vow to remain non-violent, but what really worked for this movie was its exaggerated and overblown stunts that were so fun to watch. One of my favorite scenes was when they sent a 3D film with 3D glasses to an asylum where Murdock was detained—the walls suddenly came crumbling as the A-Team drove their tanker right through the wall, perfectly timed with the scene of the onscreen tanker driving towards the audience. And of course, all the mentally unstable “audience members” exclaimed  how real the movie was, drawing much laughter from the real audience.

One of Hannibal’s quote sums this movie aptly: “Overkill is underrated.”