A New Commandment Given By God 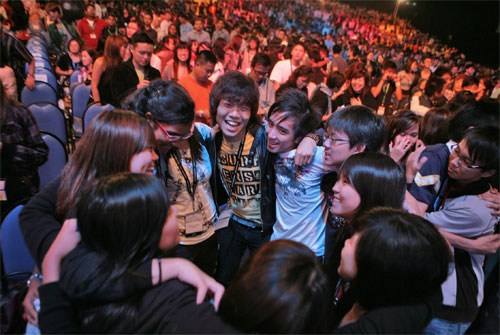 In a testimony that moved the congregation to loud shouts and cheers, four teenagers from City Harvest Church shared how their desire for campus revival in their neighborhood, Woodlands, caused their zone to grow from 152 members to 329 members in just one year.

The CHC band revved up the congregation with songs from their newly launched album entitled Reign: “God Of My Life” and the catchy “Only You.” Clad in red and black, dancers from O School added spark to the already vibrant praise and worship.
Then, to the congregation’s surprise, Alison Yap, the assistant vocals supervisor and worship leader, for the very first time displayed her talent as a pianist as she sang “Out Of My Hands,” drawing the crowd to a higher level of worship.

Having delivered power-packed and inspirational offering messages for the past nine sessions, John Avanzini encouraged the congregation to do what may not come naturally that night in their giving.

Avanzini read from 1 Kings 3:3 in which Solomon had given an unusually large sacrifice to God, and God blessed him with a kingdom on earth and divine wisdom.

Tan Seow How, pastor of Heart of God Church, Singapore, then introduced the Parade of Schools—an upbeat, exhilarating display of cheerleading jumps and stunts. Clad in colorful outfits, students from four different clusters: secondary school, junior college, university as well as a cluster representing CHCKL grooved to the beats of Lady Gaga, Michael Jackson and the disco era of the 80’s.

The night saw an amazing display of somersaults, pyramids, pyrotechnics and dance routines from the young ones. Following the Parade of Schools, the congregation prayed for the various youths in schools all over Asia and around the world.

The night culminated with Kong Hee’s sermon message, which focused on the importance of revival among youth, and the significance of forming good relationships. Sharing from Psalms 103, Kong spoke of David in his youth as a songwriter, musician and giant-slayer.

Suggesting that revival could possibly meet its end in a generation or two, Kong urged the congregation to convey their passion to the next generation of youth and pass on the fire of revival. In relation to  Peter Wagner’s concept of the “13/30” window—the age range where the most number of people receive salvation—Kong said it has been found that 75 percent of first-time salvations occur in the lives of those under the age of 19.

Kong gave examples of biblical heroes like David, Jeremiah and Jesus Himself who had, in their youth, accomplished and carried out great things for God. Mary was a young woman about the age of 16 when she agreed to be the birth mother of Jesus.

MTV, said Kong, makes tremendous impact on the ideals and dreams of youth all over the world—people 12 to 34 years of age make up at least 71 percent of its total viewership. Expounding on the effects of MTV, Kong shared five characteristics of youth: they are open and flexible, moldable, love to dream, have a tremendous capacity of faith and are the “treasure.”

Kong then challenged the congregation to order their priorities wisely. Most church ministries place emphasis on ministry, then evangelism followed by discipleship, but lack the element of good, healthy relationships. Church leaders burn out due to such a factor of great consequence. To avoid this, Kong provided a four-step approach in loving others more.

Firstly, one has to be present for their friends. Secondly, one has to be consistent in his follow-up and care. Using a past counseling experience as an example, Kong spoke of a teen who had many doubts about the Christian faith but came to Christ through the care and concern his church friends had shown to him. Thirdly, one has to have patience. Quoting from James 1:19, Kong explained that one should be quick to listen and slow to speak. Lastly, one has to be accepting, learning to stick with others through thick and thin.

Kong urged everyone in the room to approach someone who is shepherding them in the faith, to show appreciation to them for their love, support, care and concern over the years. The night ended with a display of what Christianity is all about: the love of God demonstrated through relationship.