Session 2―Phil Pringle: “Brandish The Sword Of The Spirit” 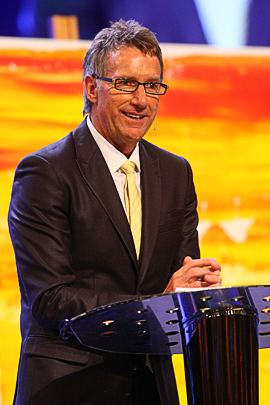 Phil Pringle stirs up the crowd to fervent prayer.

Pastor Phil Pringle of Christian City Church (CCC) took to the stage against the projected backdrop of his oil painting and declared unequivocally that he was going to share about prayer and the power of prayer. This was to be the second plenary session on the opening day of Asia Conference, coming as a timely reminder after a grand opening that the conference was not just about excitement and activity, but more importantly, about seeking God.

Driving his point in, what followed was not his usual dose of humour but rather, a wave of hunger as he stirred up the entire congregation to pray. Sharing how “the church grows in a climate of war,” he led the assault against the kingdom of darkness as commander-in-chief, leading the church to imagine and mime the unsheathing and brandishing of the sword of the spirit. With a battle cry, the entire hall rose in prayer as Pringle literally wielded a physical blade on stage, confessing the promises of God.

Having begun with actual prayer and intercession, Pringle began to share about the primacy and process of prayer as a Christian discipline. Sharing from 2 Chronicles 7:14, Pringle taught how the first step in approaching God must necessarily begin with self humbling which involves esteeming God as more important than everything else in our own life. Whether a believer seeks the hand or face of God would be reflected his manner of prayer.

He began to share his own experience in learning how to pray and tarry in the presence of God, specifically pinpointing the breakthrough during his literal mountain top experience at Mount Cook. The act of prayer, is not just about praying but rather, about connecting and seeking God. Apart from reading the Bible, praying is the other single most important key to having a successful and effective ministry and every single Christian must learn to pray even more.

Having taught about the right attitude toward prayer, Pringle began to share how prayer, as described in James 5:15-18, needs to be fervent in nature. Effective prayer is therefore strongly passionate in its expression and manifestation. Igniting passion in prayer would require asking oneself the question of what turns our fire on, precisely because only praying with fire would lead to a change in society.

Finally, Pringle also shared how Christians should desire fresh oil and anointing for a new day―ministers often burn out because the lack of anointing means that the metaphorical candle wick itself is burning out and not the oil. Here, he dramatized Samuel’s search for Israel’s king and his eventual anointing of David. The Lord’s choice of David was not due to his outward appearance but rather the condition of his heart. In similar fashion, as modern-day Davids,  we are called to have Jesus as our highest purpose and cause in ministry. With this, he closed the session with a prayer for a fresh outpouring of anointing upon all who were hungry. In the short session, he brought the entire hall to press in and also to press on.