500 audition for City Harvest’s Got Talent. 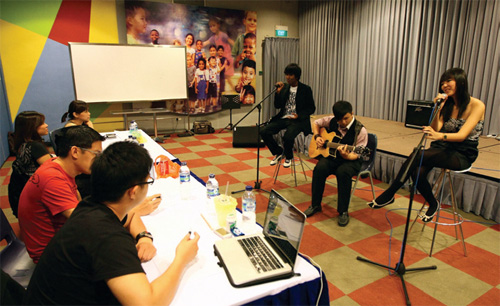 They came, they performed and they wow-ed.

City Harvest’s Got Talent kicked off its one-day audition on Thursday, April 29 at the fourth level of CHC’s Jurong West premises. More than 500 contestants turned up for the audition that day, the youngest being 6 years old.

As part of Asia Conference 2010 competition line-up, CHGT is modeled after the hit TV show, Britain’s Got Talent, and includes not just song items and dance routines, but also music bands and beat-boxing. This year’s competing acts also feature opera singing, a magic performance and live-looping.

Darren Tan, event organizer, described the significance of the audition. “Without a doubt, many of the contestants who came for the audition have talent and what it takes to win a talent competition. The audition actually helps them to break the fear factor, and it’s a good gauge for them to see where they stand among their competitors,” he said.

Tan further revealed that most of the contestants were “talent-spotted” and encouraged to go for the audition. “There are many people who are very talented, but need a little prodding to come forward and express themselves.”

After receiving encouragement and affirmation from close friends, CHGT finalist, Mama And The Chio Bu(s) decided to join the competition. Says group member, Andrea Lim, mother of a 1-year-old, “I wanted to be a part of Asia Conference 2010 and I thought, ‘why not the talent contest?’ So with encouragement from friends, I roped in a few friends from the dance ministry and formed an all-girl singing and dancing group.”

Soloist Melody Chan, 21, decided to take part in the competition after being inspired by Dr. Kim Sung-Hae who preached in CHC two weeks ago. At the audition, Chan impressed judges with her soaring vocals.

Another group, who calls themselves Genelations, is a five-piece, all-girl, multi-national band. The five friends met while studying in the School Of Theology. At the auditions, Genelations gave a rendition of one of The Beatles’ 1970s classic “Let It Be.” Lead vocalist Yang Chi-Jung, 32, shared how she was excited about forming an international band, with group members from Taiwan, the UK and Singapore. “This is probably a once-in-a-lifetime opportunity for all of us,” Yang says.

For 15-year-old Adam Ang, he is glad to have had the opportunity to perform his own original composition. Ang, who began writing songs at 12, hopes that he can play a part in helping to change the world through his music. For this year’s competition, he wrote a song entitled, “A Song for Haiti” as a tribute to the disaster-stricken country.

Tan is pleased by the variety and creativity of the contestants. “There’s a lot more fusion in the performances this time round. It’s not just singing, but singing fused with rap. It’s not just dancing, it’s dancing fused with beatboxing. There’s even classical instruments and opera!” beams Tan.

Apart from the range of performances, Tan also notes that the acts are more hi-tech in nature, and include technical factors such as keyboard, midi and looping for guitars.

At this year’s CHGT, CHC’s affiliate churches will also have a chance to showcase talented finalists from their respective nations and ministries. Among the affiliate church finalists is an 11-year-old girl who will be performing a song item.

The best performances will compete at the finals of City Harvest’s Got Talent on Sunday, May 30 during Asia Conference 2010.