Every year, the School of Theology invites special guest preachers to impart new spiritual insights and to motivate the students to do great exploits for God. This year proved to be no exception, with three acclaimed preachers visiting SOT over three weeks in April, to share their teachings. 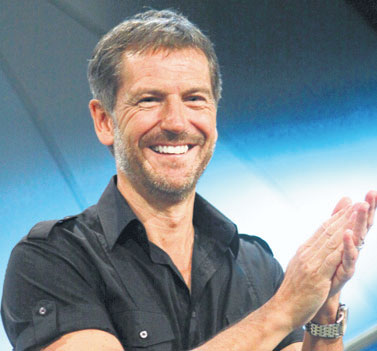 John Bevere preached two sessions on April 12. Bevere is the co-founder of Messenger International in America and co-host of the television program, The Messenger. He is also a best-selling author of 15 books, such as Driven By Eternity and Drawing Near. These have been translated into multiple languages.

In his first session, he brought forth a message of honoring leaders in spite of their behavior and handling unjust treatment correctly. Quoting the Bible verse by verse, Bevere shed light on this principle and related his own personal experience in which God taught him to humble himself in order to honor a superior who had treated him unfairly. Many in the audience were convicted by his strong preaching and made a decision to allow God to act on their behalf instead of avenging themselves.

Undergraduate Emerald Goh, 21, described both sessions as “fantastic” and “mind-blowing,” and was determined to apply these new insights into her daily life. Ed King made a special guest appearance that same week on April 16. He is the founder and senior pastor of Redemption Church International located in Knoxville, Tennessee, which has a growing congregation of more than 2,000 members.

King emphasized the importance of belonging to a local church—the place of joint which becomes the supply of the Spirit for each individual member. Using the analogy of members as building bricks and the local church as a wall, he illustrated an important spiritual truth: Without the bricks (members), the wall (local church) cannot exist. On the other hand, if the bricks (members) are not part of a wall (local church), they have no purpose whatsoever. Many of the students were impressed by his teaching, commenting that it reflected great spiritual depth.

The following week on April 20, John Snelgrove spoke to the Bible school students. He is one of the senior pastors of The Vine Christian Fellowship, a thriving and modern church located in the central district of Hong Kong. Before Snelgrove took to the pulpit, the student body enjoyed a meaningful time of praise and worship led by the Vine Band, who sang original songs out of their newly released album Ageless Melody.

Student Shawn Chua, 18, was impressed by the dynamics of the band and found their worship style to be an interesting experience.

Snelgrove shared that the name of his church is derived from John 15:5; out of the call to deepen their relationship with God comes a mandate to build His family. He shared 10 keys to building a successful local church, which were based on his own experience after retiring from the insurance business to enter full-time ministry. Some of his key points included these: a church has to have a culture or DNA; a church must also have a kingdom mindset and be culturally relevant, engaging society at every level.

Liu Peng, 23, an undergraduate from the National University of Singapore, felt strengthened in his faith after the meeting. He felt that the 10 keys Snelgrove shared were absolutely vital for every church.

The guest preachers left the SOT students with a greater hunger and expectancy of what is yet to come for the rest of their school term, which will end August this year.