SJI Int’l Give To Aid Haiti

The elementary school children from SJI International show that when it comes to giving, age is no barrier. 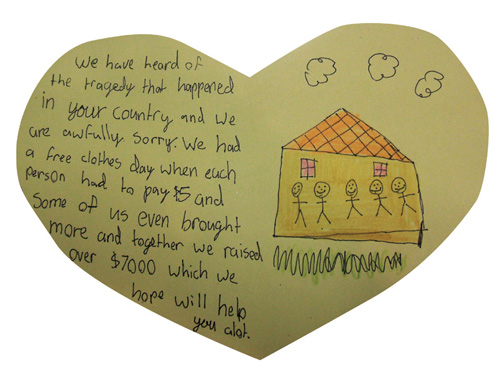 Students from St. Joseph’s Institution International Elementary School held a “Free Clothes Day”—students were allowed to wear outfits other than their school uniforms. The purpose of this day was to raise funds for the victims of the Haiti earthquake. Despite their tender age, the oldest being 12 and the youngest, 4, the students rallied together and got their families involved in the fund-raising endeavor. Many of them also emptied their piggy banks to give to the cause. The 400 children raised an impressive S$7,088.50 toward relief work in Haiti.

The school decided to give the money raised to Singapore-based humanitarian aid organization, CityCare. The reason for their decision, according to one parent-volunteer, Heena, was that CityCare does not merely disburse funds to Haiti, but has been consistently sending disaster relief teams, comprising Singaporean doctors, nurses and disaster aid relief workers, to physically help the victims in Haiti.

Aside from donating their money, 80 students from Grades 3 to 5 also made a huge card on which they pasted paper hearts containing personalized well wishes to the children in Haiti.

In a simple ceremony on Feb. 12, after the school’s celebration of the Chinese New Year, principal Louise Grant presented the check to Victor Lim, one of the directors of CityCare. Lim says, “It is heartening to see people, especially young children, being moved by the plight of the earthquake victims, despite these Haitian orphans being people that they have and probably will never meet. This act of giving is inspiring and it not only benefitted the Haitian children, but also the students from SJI Elementary as they develop empathy for their fellow men.” The school’s contributions, card and well wishes were brought to Haiti by CityCare’s fifth disaster relief team that left Singapore on Feb. 17.