Singapore’s CityCare mounts an aid campaign in the quake-struck city.

People sleeping on the roads, alongside pigs, rats, dogs, cockroaches and flies. Patients with maggot-infested faces. Badly wounded heads and limbs, some stripped of flesh down to the bone. Streets covered with rubbish. Fear everywhere.

These were scenes that greeted CityCare’s first medical team throughout their week in Carrefour, the devastated town west of Haitian capital, Port-au-Prince, where an earthquake of 7.0 magnitude struck on Jan. 12. CityCare is a non-profit organization dedicated to promoting volunteerism and community service. To date, CityCare has sent four medical teams into Haiti to help out with the disaster relief work and provide medical aid. The organization plans to send teams until March, as there is still much to be done. Plans in the pipeline include a water purification project and the building of an orphanage.

Dr. Tan, a consultant urologist, summed up the devastation saying that out of all the disaster relief trips he had been on, this was the most horrific. He added that the work and support needed in Haiti was still “tremendous”. “We want to appeal to doctors and others to support, either by offering their expertise or in whatever way they can relieve financially, to back up the purchase of medical supplies and equipment,” said Dr. Tan. “We were hampered as a result of not having sufficient equipment & supplies.”

However, he said that the basic objective of setting up the first medical clinic in Carrefour was achieved, since they were the first relief group to arrive on site. About 50 percent of Carrefour, which has 334,000 inhabitants, has been destroyed, and the team from CityCare opened a makeshift clinic in a church that interestingly, was the only structure in the area that was not reduced to rubble. The worst case they saw was a lady, who had maggots crawling out of her fractured face. The woman, in her 50s, had her upper body trapped under her house, and she stayed trapped with her wounds exposed and her legs sticking out of the rubble.

“Her wounds had been left open to the environment, and so they were very severely infected by the time I saw her,” said Dr. Tan. “So this was quite a horrifying scene for us, to see her face all smashed up and disfigured with wounds that had maggots crawling out.”

While the team did the best they could to clean and dress her wounds, Dr. Tan said in a case like hers, proper and sterile medical treatment was needed, but there were no functioning hospitals left. “I asked her to come back two days later to just clean the wound again but the wound did not really improve,” said Dr. Tan. “In fact, the maggots had grown bigger.”

With no electricity, lighting or ventilation, the team had to fight off flies and manage an increasingly overcrowded clinic. While they tried their best to treat all the patients who poured in, they admitted that there was only so much they could do under the conditions.

“In all my experiences of working in slum areas, I would say that this is probably the worst I have ever seen,” said Dr. Tan. “I think what they really need is to rebuild the whole infrastructure, because at the moment, there is nothing.” 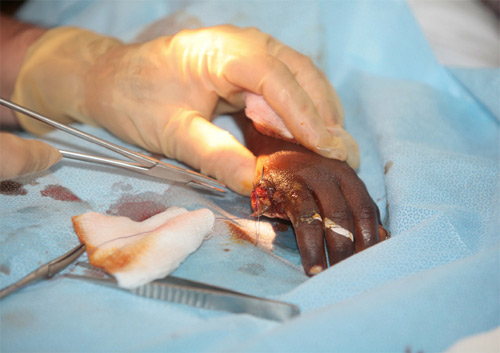 Apart from the devastation and poor infrastructure, the team also faced other problems such as basic communication with the locals. Consultation had to be done through an interpreter, and questions had to be rephrased several times before the doctors could fully understand the patients’ conditions. Traveling to Haiti was an ordeal in itself, with a flight delay in New York caused by a passenger security breach at JFK airport a couple of months ago. That set the team back by one day. The team travelled 70 hours in total, going through the Dominican Republic from the US before finally arriving in Haiti.

Putting things in perspective, Dr. Tan said, “[This is] not about us, but about the people there, how they are suffering and the help that they need from the rest of the world. Our role is to inspire and encourage others to come along if they can.”
Intensive care and radiological nurse, Carrie Lim, said the most important thing for future volunteers heading into the disaster zone was to be ready to handle all sorts of medical cases at any time of the day. This may mean foregoing meals and sleep.

Stephen Pok, who was put in charge of coordinating the clinic and was the only volunteer with no medical training, said the team had done their best. “Many came with serious injuries, open wounds, faces cut up, scalps cracked open, but we tried to see as many patients as possible.”

He added that the two doctors worked doubly hard to speed up processes so that the clinic could see about 100 patients a day. Other clinics set up by relief organizations in the same area were managing an average of 35 a day.

Asked what the first thing was that she would do once she got home, Lim said she would text her friends to actively contribute to the ongoing humanitarian efforts in Haiti.

To volunteer for upcoming trips to Haiti, e-mail haitirelief@citycare.org.sg with your name and contact details. Kindly indicate if you have medical or nursing training.