The Big Screen: New York, I Love You 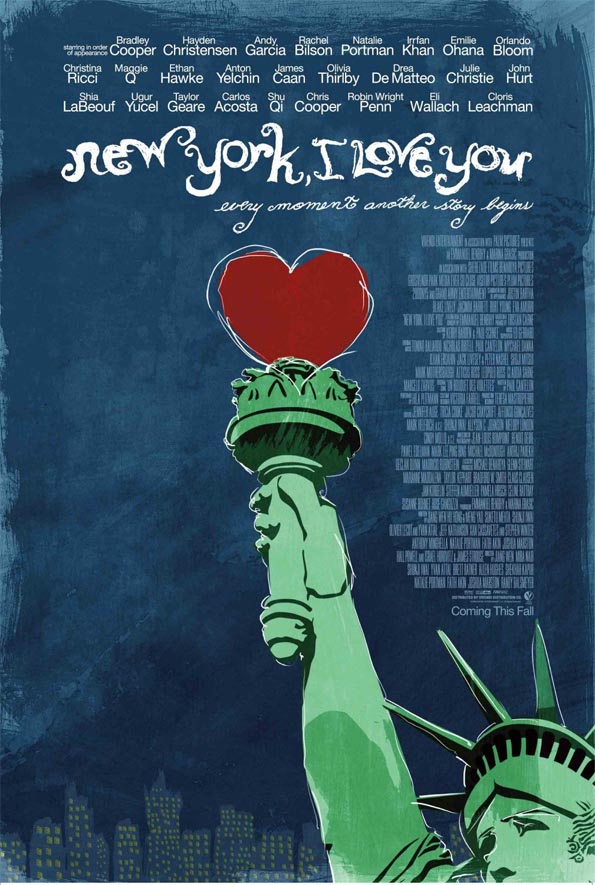 With such a star-studded cast, one would expect wonders from this film. Yet, somehow, it all just falls flat.

New York, I Love You is the second movie from a franchise on love in different cities. The first, and more enjoyable Paris, Je t’aime was also a collection of short films centering around love. Producer Emmanuel Benbihy hopes to have more of such movies made in Shanghai, Rio de Janeiro and other countries.

The concept itself is intriguing—eleven filmmakers presenting eleven different short films all based on the same theme. Each film was shot over a period of two days and the short films were then fused into an anthology of love, all happening in New York.

Portraying all the different racial, occupations and age demographics of the Big Apple, it seemed as though all the stories aimed to show the diversity of New York, scraping lightly instead over the theme of love. As it is, the only running theme for the whole show was the location—New York. And if the movie was supposed to portray what New York was like, you would have learned to assume that most New Yorkers spend their time in bars and going on smoke breaks.

The stories for each short film were interesting, but could have seen deeper development—it felt as though each short film came in bits and pieces and were tossed together randomly. With so many short stories to choose from, it was easy enough to pick favorites from the pile.

Ethan Hawke was hilarious as a scruffy writer who tries to charm a Chinese hooker (played by Maggie Q) during a smoke break.

However, the other stories merely faded into the background. And in fact, the aforementioned films also withered the moment I walked out the cinema.

On the whole, the movie was just unmemorable. It could have been the fact that all eleven short films seemed disjointed or plainly because eleven short stories were crammed into that short period of time even though two stories had already been taken out of the mix, with one of them a film directed by Scarlett Johansson.

The film could have done with a whole lot of improvement, such as having fewer, but longer stories with more developed characters.

There are a few gems in the film, such as the old sweet couple going down to Coney Island. But for the rest of the film, unless you are a true New York lover, you would not really enjoy this film.