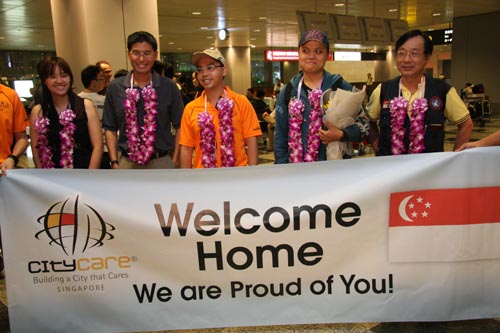 People sleeping with pigs, rats, dogs, cockroaches and flies. Patients with maggot eaten faces. Badly cut up heads and limbs, with some stripped of flesh down to the bone. Streets covered with rubbish, and fear everywhere.

These are the scenes witnessed by CityCare’s first medical team throughout the week that they worked in Port-au-Prince, the capital of Haiti, where, on January 12, 2010, an earthquake of 7.0 magnitude struck.

The first Singaporean team left Singapore for Haiti on January 15, and part of the group returned this morning at 6.30am to be greeted by media at Changi Airport. The returning group comprised Dr Tan Hun Hoe, 57, Dr Basil Wu, 42, Carrie Lim Cai Ying, 29, Richard Kwok, 33, and Stephen Pok, 28. Consultant urologist, Dr Tan, 57, one of two doctors in the first CityCare relief team, summed up the devastation saying that of all the disaster relief trips he had been on, this was the most horrific.

He added that the work and support needed in Haiti is tremendous.

CityCare was the first non-government organization to arrive on January 18 in the devastated Haitian town of Carrefour, which has 334,000 inhabitants. CityCare opened a makeshift clinic that saw about 100 patients a day over one week.

About 50 percent of the town has been destroyed, and the team worked out of a church that, interestingly, was the only structure in the area not reduced to rubble.

The worst case the team saw was a lady, who had maggots crawling out of her fractured face. The woman, who is in her 50s, had her upper body trapped under her house, and she stayed trapped with her wounds exposed and her legs sticking out of the rubble. Dr Tan said in a case like hers, she needed proper and sterile medical treatment, but there are no functioning hospitals left. “When she came back two days later, the maggots had grown bigger.”

The team was housed in a pastor’s home, the town’s only residence left standing. But the members found themselves running out of the house when there were three aftershocks throughout their stay.

“One of the aftershocks was when we were in the house that we were staying in, but everybody managed to run out in time,” said Dr Tan. “The other aftershock I felt was in the clinic … all the patients dashed out so quickly, you could see the fear in their faces whenever there is an aftershock, it really reminds them of a terrible experience.”

Describing their efforts as “a little drop in the ocean”, the team expressed gratitude at having been able to make a difference physically, halfway round the world. They also repeated their appeal for more doctors and medically-trained persons to volunteer on upcoming CityCare trips to Haiti.

Intensive care and radiological nurse, Carrie Lim Cai Ying, 29, said the most important thing for future volunteers heading into the disaster zone was to be ready to handle all sorts of medical cases at any time of the day. This may mean foregoing meals and sleep.