Chefs For A Cause Too many cooks spoil the broth? More like many hands make light work.

Featuring 40 recipes contributed by 10 of Singapore’s top chefs, Recipes from the Heart warms not just the tummy but the soul as well. Launched during an appreciation evening cocktail as part of the ‘Chefs for a Cause’ fundraising project on Dec. 28, 2009 at Swissotel Merchant Court Singapore, all proceeds from its sale went toward bettering the lives of underprivileged children. With the tagline “empowering lives through culinary arts”, Chefs for a Cause targeted to raise S$700,000 for the beneficiaries of MILK (Mainly I Love Kids) and Project Happy Feet (a not-for-profit organization that educates and trains children in developing countries such as Cambodia and Vietnam). The event organized by Project Happy Feet involved culinary luminaires such as Jimmy Chok, Executive Chef from the Academy Bistro, Pang Kok Keong, Executive Pastry Chef of Les Amis Group, Daniel Sia, Head Chef at The White Rabbit, as well as notable food writer, Chef Christopher Tan. It is the brainchild of Chok, who says, “No one should go hungry. This is why we put together Chefs for a Cause; if we don’t fight for our causes, no one will fight for us.” 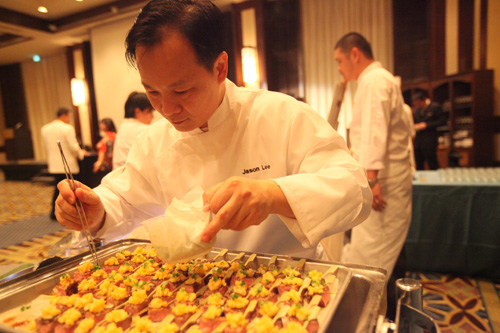 Recipes from the Heart also features visual shots by established photographer Edmund Ho of Jambu Studios and inspirational quotes penned by the chefs as they share their secrets to success. Recipes will run the gamut from appetizers to desserts, such as Daniel Sia’s tart tartin with a twist, Christopher Tan’s chicken rice-inspired sushi platter, Chef Petrine Fan’s crepe with apples as well as her slow-cooked salmon with Japanese broth. It retails at S$68 through www.projecthappyfeet.org. and will be available from February 2010.

Earlier during the day, the same 10 chefs whipped up a 3-course meal at Swissotel Merchant Court for about 600 children. “One lunch isn’t going to solve all the problems in the world, but for these children, many of whom have never had a meal in a hotel, it was a memorable highlight during their school holidays,” says Gerard Ee from Beyond Services, one of the beneficiaries of MILK. Adds Deborah Chew, co-founder of Project Happy Feet, “The look on their faces as they stepped into the ballroom made it all worth the months of planning.”