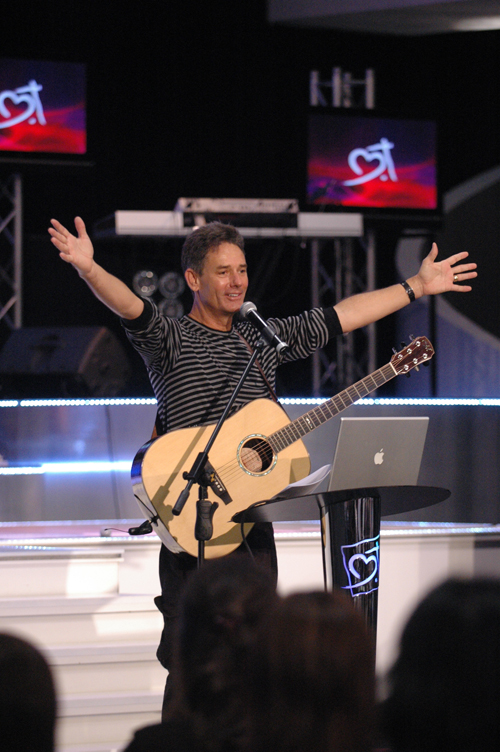 City News met up with legendary singer/songwriter, Bob Fitts. Fitts was in Singapore to songlead at the nation’s annual Festival of Praise held in August 2009.

CN: Your trip to Singapore this time round is a long one, a couple of months to be exact. It sure feels like something is brewing. Could you tell us more?

Fitts: Singapore is an island that has become a center for missions. In fact, I remember our very first trip to Singapore was a stopover on the way to Pakistan. That was a long time ago and we’ve got a lot of history here on this island. We want to use Singapore as a base, to go out and do some missions outreach to different nations such as Indonesia, India, Korea, Malaysia and so forth.

Singapore is a place where God is going to do some amazing things, and we just feel so blessed to be here.

CN: You mentioned about having a history here in Singapore. Can you tell us, in your observation, what are some of the significant changes, particularly in the spiritual realm, that have taken place over the years?

Fitts: We come from Hawaii, which is also an island, like Singapore. So in in a lot of ways, they’re very similar to here, with lots of different cultures and folks. But I have seen an amazing, amazing change here. Particularly in the areas where I have an involvement in, which would be in the area of music — praise and worship. There’s just so much of good music coming out of Singapore now — many worshippers, worship leaders, bands, musicians, artists — the whole gammon. I’ve seen a huge increase in that. This is something to be excited about.

CN: What are your thoughts on the current praise and worship scene? How has it evolved over the last twenty years?

Fitts: Styles have changed and modified over the years, according to different things that are happening in different parts of the world at any given time. But these things are fairly cyclical; they’ll come and go. Fundamentally, the passion for Jesus is really the heart of it all. It takes on all different kinds of styles and modes, all of which embraces one thing, and that is, whatever you do, do it with all your mind, with all your soul, for the sake and for the name of Jesus.

CN: So what’s in store for you over the next couple of years?

Fitts: There are two things that we’re working on. We just released a new CD, Restore, which talks about the whole theme of Christianity — restoration. But there’s another side of things that my wife and I have been working on for a while, for about 15 years now. The song ‘I Want to Know You’ is a worship song that has been really popular for a while, and I was singing it one time when I felt the Holy Spirit speak to me saying, “Bob, do you really want to touch Me? Do you really want to see my face? If you want that, then here’s what you do. I want you to go and take care of orphans and widows. Jesus said these words, ‘when you feed the poor and take care of the sick, you’re actually touching Me.’” And I thought to myself, “Wow, how can I as a worship leader, or even an individual experience more of Jesus?” So my wife and I have been doing this since then — raising funds for orphans and widows. A lot of folks are doing that today, which is great. We actually do experience an aspect of worship. Most of our worship is to the unseen realm but when you actually touch a widow and put your arms around her and say, “These are the arms of Jesus,” He will praise you in return. Because He says, “When you do this to the least of these, you do it to Me.”