More than just fishballs or pingpong, the third musical ever staged by YoungTalents provided its audience with many different perceptive to life. “Fishball Pingpong” was put together by a 123-member cast, with 21 persons with special needs involved (more than the previous two years). 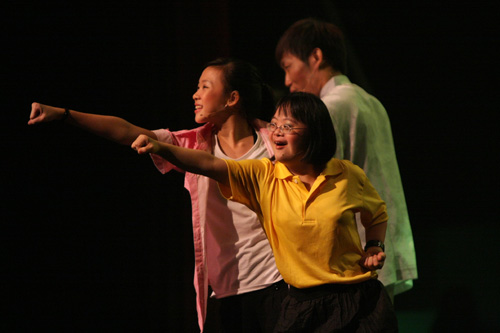 The musical preluded with a folklore of how pingpong originated, as told by Grandpa Ong (played by Adrian Cheung) to her granddaughter, Candy (played by Sissy Ng). This affinity between the two generations was repeatedly emphasized throughout the production, with the advice continually given by Grandpa Ong. The lead actors and actresses formed the HDB gang and brought the house down when they sang a chicken version of “Old Macdonald” to provoke Candy to join the national table-tennis team after being talent-scouted by the national coach. For the very first time, we saw how a saucepan can be used in place of a table tennis bat at the game – for Candy was more accustomed to cooking fishball noodles than sports of any sorts. The introduction of a novice to the national table tennis team greatly provoked Song Jiale (played by Rachel Lim), a foreign talent, who was striving to win the gold medal. The hostility between the two built up until Candy and Julie (played by Emiko Ong) saved her from having her arms being broken by hired gangsters. From then on, the friendship between Song Jiale and Candy continued to blossom as they tackled with issues of identity, perceptions and eventually, the kidnap of Julie by the opponent table tennis team manager.

Grandpa Ong played a pivotal role in Candy’s life by providing her with guidance and advice, not making the decisions for her. Quoting from him, “ I nudged you in a certain direction but you are the one that makes the decision for yourself. Learn to follow your heart.” This was but one of the many other golden words he spoke. A key highlight of the show was the table-tennis playing and fighting scenes. Squeals and laughter could be heard as these scenes were tactfully carried out by the leads with the help of “ninjas in black”. The climax of them all? The slow-motion reenactment of moves and when Grandpa Ong fights off the dozen of little hooligans singlehandedly at a go to rescue his granddaughter Julie.

With help from the lighting crew, the use of blackout and flashes of light rendered the particular fighting scene greater credibility and left the crowds in ‘whoos’ and ‘ahs’. The victory of Grandpa Ong was shared by the audience as they clapped thunderously, seeing the “hooligans” lying on the ground. The entire crowd roared when the people with special needs came together to give a martial arts display. The cheers got deafening when we witnessed them breaking boards. The shouts that came from the cast as they carried out their display serenaded the entire theatre. As the cast concluded the production with a farewell song, the entire audience gave a standing ovation. And we saw some of the people around us wiping away the tears in their eyes, obviously touched by what was brought to them on stage. When interviewed after the musical, Ms Penny Low highlighted “The use of a traditional storyline to incorporate current issues like the Youth Olympics and table tennis is very well-done and very relatable to the audience.” Being a former table tennis player in her younger days, she found the table tennis scenes particularly interesting to watch as of how real the movements were to life.

Mr Lee Suan Hiang also added “Getting so many children from different backgrounds and schools to put forth a performance of such high standard is commendable and will help build their confidence in future.” One would find the entire production characterized by a lot of “local flavors” with the occasional sprinkle of dialects and Singlish in both speech and rendition of songs.

KC Gan, music producer, shares that as he wrote the songs, he exposed himself continually to children songs, cartoon songs, Japanese anime and especially soundtracks from the movie “Ponyo”. What left the greatest impact on him in his experience is, although the children are not as vocally developed as the adults that he work with, they are given the opportunities to pursue their interest. Like what he says, “You will never know what they are able to do in ten to twenty years’ time but at least they are given the opportunity to start now.”

Brian Lim, 15, Catholic High School, took to the stage for the very first time in a musical as a lead. He loved the experience and particularly enjoyed the opportunity to work alongside her sister, Natasha Lim, 14, whom he supposedly fell in love with in the show. He found himself sharing a closer relationship with his sister through the musical.

When we interviewed Emiko Ong, 8, who acted as Julie, on her experience? She enjoyed herself thoroughly although it was very tiring. And her greatest challenge in the show? Restricting her movements when she was kidnapped in the show but she got around to overcoming the fear. She was no doubt, very well-loved by the audience as she was continually being approached after the show.

Eileen Toh, President of YoungTalents, remarked on how she saw the children involved overcame their fears and learnt how to deal with stress through the preparation. And to her, she wants to let all of them know, “I believe in you.” And more than just building up the confidence of these children and to cultivate a positive self-esteem in them, the cast is also in turn empowered to give back to society in a “Kids Give Back Too” project.

Invitations were extended to children from the Darul Ihsan Orphanage and lower-income group families to catch the show. Proceeds from the musical will be used to makeover four study rooms at the orphanage. The cast also will then be visiting the orphanage thereafter.