It’s her first time singing for a Christian group, but Rachel Chua felt at home immediately.

This 15-year-old student, who is the runner-up for Campus SuperStar 2009, was performing at the Live House, an event organized by City Harvest Church (CHC) on 5 December 2009 at Singapore Expo Hall 8’s conference room.

Chua made her guest appearance alongside Da Feng Chui, runner-up group for SuperBand 2008, and Lin Jiayu, lead singer of Mantou, a finalist group in SuperBand 2006.

Chua is no stranger to performing before big crowds. She recently represented our nation at this year’s Taiwanese reality TV singing contest One Million Star V Singapore PK Challenge. 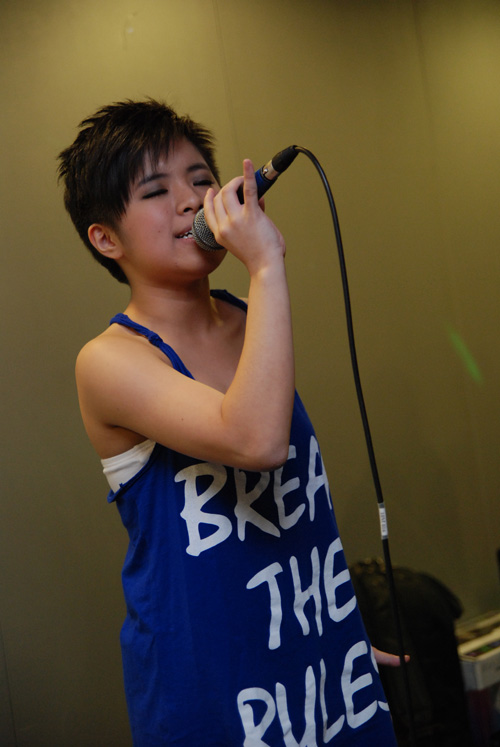 She was invited by Estella Sia, the keyboardist of Da Feng Chui, to perform for the church. And both said there’s no divide despite the artistes present that evening having different religious beliefs.

“Music brings all of us together,” said Chua.

And all the singers and musicians were well loved by the church members.

Even before the doors opened, more than 100 youths were gathered outside the room, eagerly waiting for the performance to begin.

Da Feng Chui started the evening’s program before an enthusiastic crowd, which clapped and cheered exuberantly. Refreshment was also served as the music played on.

Next, it was Lin Jiayu’s turn to showcase his vocal prowess.

On the stage, he was asked to share his formula to success.

“This journey is filled with hardship,” said Lin. “But if you are passionate about something, you must be daring to try!”

Finally, Chua took the stage and brought the house down with Stefanie Sun’s ‘First Day’ as a finale for the evening.

She told City News, “It’s exhilarating to perform before such a warm and excited crowd. I’ve heard that Christians are very friendly, and I see that for myself now.”

Soo Jia Hao, 17, an ITE student, who said he enjoyed the mini-concert thoroughly, summed it all up aptly, “It was exciting for us to have fun together. Most importantly, the performances were very inspiring.”