Lego’s popular toy building bricks became the perfect piece of nostalgia for connecting 227 beneficiaries and 66 volunteers from City Harvest Community Services Association (CHCSA).  This event was organized by CapitaLand, LEGO Singapore and Mediacorp’s ‘We Are One’ corporate social responsibility project on 7 November at ION Orchard.

As an organization that aims to inspire and care for the community, CHCSA encouraged the beneficiaries, which included the elderly, intellectually disadvantaged, hearing impaired and low-income families,  to donate a minimum of S$2 to purchase 2-by-2 stud Lego bricks. Darryl Loh, Executive Director of CHCSA, said that the charity event “mobilized Singaporeans” and presented an opportunity in “getting the beneficiaries who receive help to give back.” 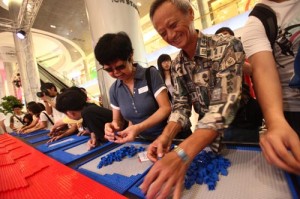 The Lego bricks purchased were then used to create a 5m by 8m Singapore island and familiar national icons like City Hall, Changi Airport Control Tower, Cable Car, Port of Singapore Authority, Housing Development Board flats and the Merlion statue. These six iconic Lego models together with the Lego island of Singapore were the creations of Nicholas Foo, the only LEGO Certified Professional in Asia. Foo, owner of Blackbulb Creations, worked through 810 hours in 45 days on the design. Despite the challenge, he felt the time was well spent as all efforts had gone into raising funds for the needy.

With a goal of raising one million dollars for charity, the inspiring day-to-day progress of the Singapore Island model, which can be viewed live via webcast, had already stirred excitement amongst a group of children at the event. Rachael Yeo, 10, Jia Rong, 9, Jesse Ngo, 11, Winny See, 10 and Safinaz Bte, 8, who rose up early in the morning, were simply “happy and excited” over their individual involvement. As each laid between 50 and 100 pieces of Lego bricks, the layers of the blue sea surrounding the island model became evident.

Bernard Lau, 20, a student volunteer, who served as an usher and facilitator in giving building instructions, was impressed with the meaning behind this charity event. He said that unlike the usual donation drive where beneficiaries were often seen as takers, this event enabled everyone to participate and be a part of a building project. Although the Lego bricks were priced at two dollar apiece, the beneficiaries sacrificed and gave to lay the foundation and make a difference.

Like our forefathers who toiled in the building of Singapore, the selfless giving of the beneficiaries to put together more than 500,000 pieces of bricks with the rest of the donors have filled Singaporean hearts with hope and compassion.