While the kids were participating in five exciting games, the volunteer befrienders and SP students formed the words ‘KIDS BREAKOUT!!!’ made purely with coloured stars which they painstakingly folded throughout the week. 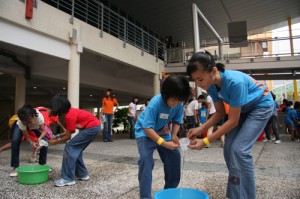 Kim Wakerman, star of the Kids Central TV hit, ‘We are R.E.M.’, led the kids in two exciting rounds of gigantic UNO Stacko and bursting of balloons through unconventional methods.

The top three prizes were given out to the kids who won the games and showed exceptional teamwork. After the prize presentation, the kids began bursting every balloon and enjoying candy floss and popcorn made by the SP students.

The kids were also given a chicken rice lunchbox and mooncake to celebrate the upcoming Mid-Autumn Festival.

SP organizer Toh Fang Ru, shared, “We faced many challenges such as manpower shortage to run the event and lack of people to fold the stars as we went ahead planning this event. Despite that, we went ahead with the plan because it is meaningful and we simply want to do something for the kids.”

The Kids Breakout has been a great success as every kid left believing that each of them is a Star.