Being a Champion Parent! The way to bring out the champion in your child is to be a parent leader to him — through good communication, not demand for authority.

That was the key lesson in a two-part workshop titled Champion Parenting, held over July and August 2009, which attracted over 90 parents and parents-to-be.

The workshop was conducted by David Chiem, the founder, chairman and group CEO of MindChamps, a former child actor whose own loving experiences with his father has shaped much of his philosophy and business strategy.

MindChamps is a premier learning programme for children that teaches them learning strategies as well as cultivates a winning attitude. Chiem is a big believer that parents have a key role to play in a child’s development and learning potential.

In his two-part workshop, Chiem demonstrated the importance for a parent — particularly a father — to be a parent leader. That means, a leader to your child, through communication processes and not sheer demand for authority. Chiem shared insights on the science of parenting, and also the art of it in learning to be a parent with skill. 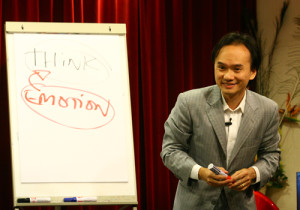 But Chiem’s most effective tool was the personal anecdotes he shared, on his experiences with his own children.

One of the key actions that parents learned was to recognize situations as opportunities to create “moments”. These “moments” remain etched in the child’s hearts and minds, and are what the child goes back to feel assured of Daddy’s and Mummy’s love for him or her.

Another fact Chiem reveals is that a parent leader should never let his emotional (or animal) part take over his ability to reason, particularly when it comes to dealing with his children — this will have an adverse effect on the child and his subsequent behaviour. As children up to the age of 18 do not have the same capacity to reason like an adult, approaching a child with anger only results in intimidation of the child, causing the child to in turn have an emotional reaction to you, and leaves him with feelings of frustration and unworthiness.

Jo-ann Song, a mother of two, 37, said that the workshop has helped to put things back into perspective for her as a parent. “From time to time, I get tired and overwhelmed from handling my child’s behavior,” she says. “Whether one needs an introduction to parenting or a refresher course, this workshop is it. I would definitely recommend it to all the parents I know.”

For Albert Soh, 38, an engineer with two children, learning to create rituals and moments was his takeaway. “I am also surprised by what David taught, that children only have the capacity to react emotionally to your reaction — so as parents we have to be careful how our words and actions affect our children.”