Dance Mania At The Big Groove 2009 The Big Groove is in its fourth year running and seeks to engage young people in expressing their creative talents to raise the standard of Hip Hop in Asia. The festival functions as a regional platform for local dance crews to showcase their talents alongside Asia’s best!

Not to be disappointed, the audience was treated to a dynamic and blood-pumping array of hip-hop beats. The multi-award winning and ever entertaining Wrecking Crew Orchestra (W.C.O.) from Japan, as well as an unique all-girls dance group made up of 11 to 13 year olds that call themselves Cool Mint (Japan), kept the crowd riveted and cheering for more dance feats! Proving that age is no boundary in topping the game for any crew, Cool Mint moved in flawless synchronization, which was a testament to their hard work! 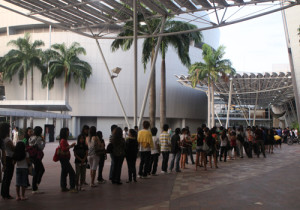 “This year’s Big Groove 2009 brings a fresh surge of creativity through the unique story lines that are fleshed out in the different performances. The performances from overseas crews were electrifying! I noticed various choreographies that depicted some of Michael Jackson’s signature moves as a means to commemorate his contribution to the global dance scene.” Daryl Kang, 21 years old, student.