Stefanie Sun: On To Her Next Stage

The Girl-Next-Door is ready for the next stage of her career.

Breezing back into town for her world tour, Stefanie Sun is a woman on a mission. After two years of silence and fending off the flurry of speculation from fans and media that accompanied it, Sun is now itching for her next breakthrough. At the official press conference on 29 May for her “The Answer is…” concert in Singapore, the petite songbird says, “For a long time, people have always associated me with the girl next door. I like being the girl next door, but I think I’ve already established that. I’d like to do more than just sing and be sweet and pretty.”

Her latest world tour, she explains, is part of her foray to step beyond her current boundaries. “The concert this time is going to be quite experimental for me in terms of showmanship.”

Her concert in Taiwan kicked off with a huge bang, featuring the singer in outrageous futuristic costumes, singing against an extravagant buffet of new technologies such as holograms as well as multi-faceted stage designs, vastly different from her usual comparatively more somber image. The singer admits to trying on over 100 different costumes before settling on the final wardrobe. The concert also featured other celebrities like Jolin Tsai and Aska Yang. Despite a hitch in the evening, when many concertgoers headed to the bathroom during Yang’s performance, the event remained a success. 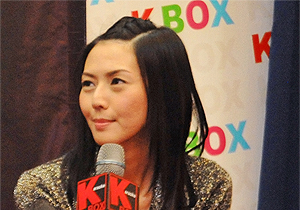 When asked if she was nervous about her next stopover concert in Singapore, she confessed that “the worst was already over”, referring to her concert in Taiwan. Sun admitted to feeling very stressed out before her Taiwan concerts, because of the great pressure she felt to impress her fans with her return to performing.

She also confessed that she sets high standards for herself. “My parents would keep asking me to come home and eat, but I kept saying, ‘I have no time! I have no time!’ On hindsight, these were actually really small things. I could have handled them. That’s one area I need to improve on.”

Looking back on her years in the music industry, Sun describes her first eight years as the most formative for her as an artist, but these last two years have been the most vital in developing her more as a person. “I’ve grown very quickly in the last two years,” she says. Looking slightly worn out but nonetheless patient and approachable, the star answered the wave of questions about her personal life and direction from fans and journalists with careful thought, alternating replies in English and Mandarin. She was refreshingly honest about her personal struggles, offering glimpses of her soul-searching on the road of fickle fame, as well as what she had been going through during her hiatus. When asked how she managed to stay true to herself, she admitted it was a “never-ending struggle” for her. “Sometimes you feel like a fraud. It’s hard to say you like everything about yourself.” But she attributed her stability to the role of her friends and family.

Returning to showbusiness has not been easy. “I don’t know if everyone will love me, but I had to try. If you don’t try, you won’t know.”

Apart from her new artistic direction, Sun also now sports long tresses for the first time in her career, sparking remarks that she was doing it for her boyfriend, Nadim Van Der Ros, a Hollander.

Why the concert’s mysterious title The Answer Is…? Sun explained that there were many questions that arose from concerns about her upcoming plans, especially after her break from music. Personally, Sun has her own questions to ask, and she concludes: “There is no one definite answer in life.”

However, it’s clear that she has now emerged with fresh new experiences to share with her fans, in this new evolution of Stefanie Sun.