On 18 April 2009, members of the AN zone headed to Conference Room 2 at the Singapore Expo Hall 8, for a time of fellowship and entertainment, after their church service. A simple but scrumptious spread of finger food, which included crispy chicken nuggets, succulent curry vegetable samosas and savory chocolate muffins, had been laid for members and friends to tuck into while preparation was underway. There were even a few waiters present, who went around serving drinks and collecting used glasses, showing how no detail was spared when it came to excellent hospitality. The place was soon abuzz with noise as people milled about, partaking in easy conversation as everyone got to know one another. 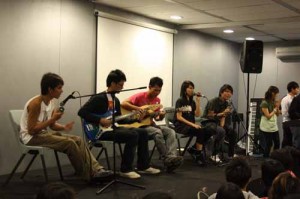 To start things off, AN zone member Pamela Choo, accompanied by Yap Pow Wee on guitars and Edmund Ong on bass, sang a few songs, such as ‘Stop and Stare’ and ‘Check Yes Juliet’, to warm up the crowd; these are all contemporary radio hits popular with youth today. As people started to stream in and fill up the room, there was a palpable sense of excitement; adding to the cheer of the atmosphere were gold and silver balloons that decked the room.

By the time special guest, Wing 罗文裕, appeared to perform, the entire room was all hyped up and ready. Decked out stylishly in an ensemble of checkered shirt, vest, jeans and boots, Wing, singer/songwriter from Taiwan, cut a fine figure onstage. He quickly launched into the rousing crowd-pleaser, ‘Good Day’, immediately stirring up enthusiastic clapping and singing-along from the crowd. He also covered the immensely popular Jay Chou 周杰伦 hit, ‘稻香’ (‘Dao Xiang’), showing off the versatility in his vocal range. Wing even invited a girl to join him onstage in belting out a rendition of ‘我可以’ (‘Wo Ke Yi’), earning him a stamp of approval from the adoring audience, who cheered even louder and more raucously.

Performing a repertoire of five songs throughout the night with just a guitar in his hand, Wing continually engaged the crowd, a testimony to his showmanship and natural charisma. He was affable and amiable, openly sharing his life story in between songs. He gave praise to God for blessing him with his talent, attributing his rise from being just a little village boy to the successful, cutting-edge musician of today, all to the grace of God. Wing was also forthcoming in speaking about his past, telling the crowd of how he used to be so intent on making money and pursuing fame when he first started out, and how he ended up feeling empty and hollow inside. He also told of his addiction to an online gambing site, which he had used as an outlet to vent his frustration, but ended up accumulating debts when he started to gamble his wealth away. Wing’s honesty and willingness to admit his past weaknesses was refreshing, especially since celebrities in the showbiz world are known to be reticent about their private lives to upkeep an image.

Wing spoke of how an invitation to church came when he was at his lowest point in life. Truly, God’s love encompasses all, for even a celebrity like Wing was touched during worship, “wiping away all past hurts, gaining a new lease of life through God”, as he went forward to receive the Lord Jesus into his heart. He went on to pen his first song in 4 years on that very night. It was also in church where he met his mentor 刘耕宏 (Liu Geng Hong), whom he affectionately calls his guardian angel, who encouraged him not just to write songs but to also come forward in singing them onstage. He was then finally able to emerge out of his shell, as he realized the power in music to inspire people and help them out of their depression.

Wing then sang ‘我有多久没有对你说我爱你’ (‘Wo You Duo Jiu Mei You Dui Ni Shuo Wo Ai Ni’), a song which he had specially written for his mother, to tell her he loves her; a reminder to the youth not to take parents for granted, but to always cherish them. Finally, Wing left the crowd with one last song, ‘爱情漫游’ (‘Ai Qing Man You’), but not before exhorting the youth to be faithful in maintaining a close relationship with the church and to walk even closer to God.