Following the immense success of his 40-minute gig during Singfest last year, Jason Mraz returned to Singapore in fine form for a spectacular, sold-out concert on 5 March at the Singapore Indoor Stadium.

All 6,000 tickets were sold out within a week, a testament to his popularity here in Singapore. Concert-goer, Sarah Ling was one of the die-hard fans who managed to get her hands on a pair of tickets. “I waited at my computer from 9 am in the morning the day the tickets went on sale just to get the seats.” 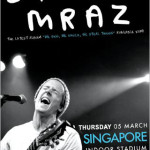 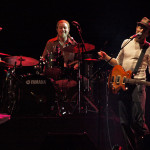 From the moment Mr. A-Z opened the show with the “Dynamo of Volition”, he sent the crowd into a frenzy with his smooth delivery and fancy footwork. Clad in his trademark hat and casual get-up, he was his usual quirky, yet geekishly-cool self. Ever the showman, he had the crowd eating out of his hands as belted out hits like “I’m Yours”, “Remedy” and “Geek in the Pink”.

During the night, he performed a solid set of songs mostly taken off his latest album, We Sing. We Dance. We Steal Things, which managed to showcase his impeccable, soaring vocals and his uncanny ability to freestyle through the breakneck-paced lyrics. There was a good mix of songs, ranging from the operatic tunes of “Mr. Curiosity” to the gospel-inspired “Live High”. At one point, his three brass-instrument players appeared on the balcony of the Indoor Stadium to provide a surround-sound experience, as it were.

It was anything but an ordinary concert. True to his reputation of a phenomenal live performer, fans were especially thrilled as he worked the crowd with his poetic wordplay and witty one-liners. Towards the end of his set, he introduced his band and proceeded to take a Polaroid of each one, flinging them into the crowd as memorabilia.

This performance at the Indoor Stadium was a rare deviation from his usual fare of playing to cosy crowds of less than 1,000. Admittedly, it did not capture the intimate feel of his 2006 concert at the Esplanade theater, but it was nevertheless a brilliant performance by an artist who is a rare commodity in the world of music.