Get Rea! With The Music

The contemporary music style that City Harvest Church (CHC) embraces won the attention of local media and was featured in Channel News Asia’s prime time program, Get Rea!, a top-rated documentary series famous for raising issues of interest to Singaporeans.

In an interview with David Yem (CHC’s Music Director) and KC Gan (Creative Director), Get Rea! host Cheryl Fox highlighted that the music played in CHC was the major crowd puller because the church’s music team successfully introduced a contemporary twist to traditional church music. 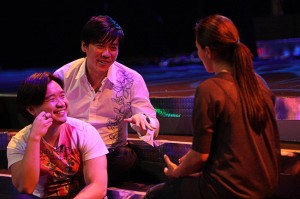 Yem described how the music team aims to capture what is happening in the church and put it in the lyrics of the songs they write. As for the contemporary style of music, Gan beautifully put across that music is the language of the heart, and thus, no one style is right or wrong. However, he further posited that it is the desire of the music team to be creative, to try music in new and popular genres.

When quizzed about how egos and dominant personalities might distract purpose, Yem acknowledged that in a team comprised of creative personalities, perspectives and opinions are bound to differ. As the creative director, he pulls the team together and ensures that everyone is mindful of the fact that they are a team, and they are here to serve the congregation and one another. There is the common understanding that teamwork is of paramount importance in the band.

Get Rea! also interviewed Aldrich Tjahjadi, a member of the worship team, asking him if the message behind these contemporary-styled worship songs sung in CHC is different to the message behind traditional hymns. Aldrich confidently stated that there is definitely no difference in the messages behind the songs and hymns as both are based on the Bible.

Another concern raised was the question of people flocking to CHC just to enjoy the music. Gan nailed it when he said that if music was indeed the crowd puller, it is something that will not last. Yem then proposed that while the music may draw the people in, it is here where people’s needs are met, lasting relationships are formed and lives are built. These are the encompassing elements that serve the purpose of the church.