She Received Jesus At 75

Mdm Low professed that her life was “not good” as she was born shortly after the Second World War. She recently met a group of volunteers from CHC’s Cancer Care, who extended help to her and led her into the saving knowledge of Christ.

Mdm Low Lai Fong is born in the late 1940s, a time when Singapore was recovering from the Japanese Occupation. Just before she was born, her father passed away due to an illness. Since then, her two older brothers, 12 and 13 at the time, took up the responsibility of providing for the family.

Growing up in a tiny room of a shophouse in Chinatown, Mdm Low never had much. She found a simple cleaning job in a bus company where she worked for over 15 years.

As time went by, her family grew smaller. Mdm Low’s second brother passed away due to cancer and his son, who is her favourite nephew, passed on not long after. Her only surviving relatives are her elder brother and his family. “I don’t keep in contact with my brother’s children,” she says, explaining that their maternal aunt had sowed discord many years ago. Since then, they have never been close.

Fortunately, she met her husband, a repairman. They got married and moved into their roomy three-room flat in Jalan Kukoh, where she has resided in for the past 40 years. “My husband was a good man and he doted on me a lot. He would buy me beautiful cheongsams and bring me to eat good food,” she reminisced. 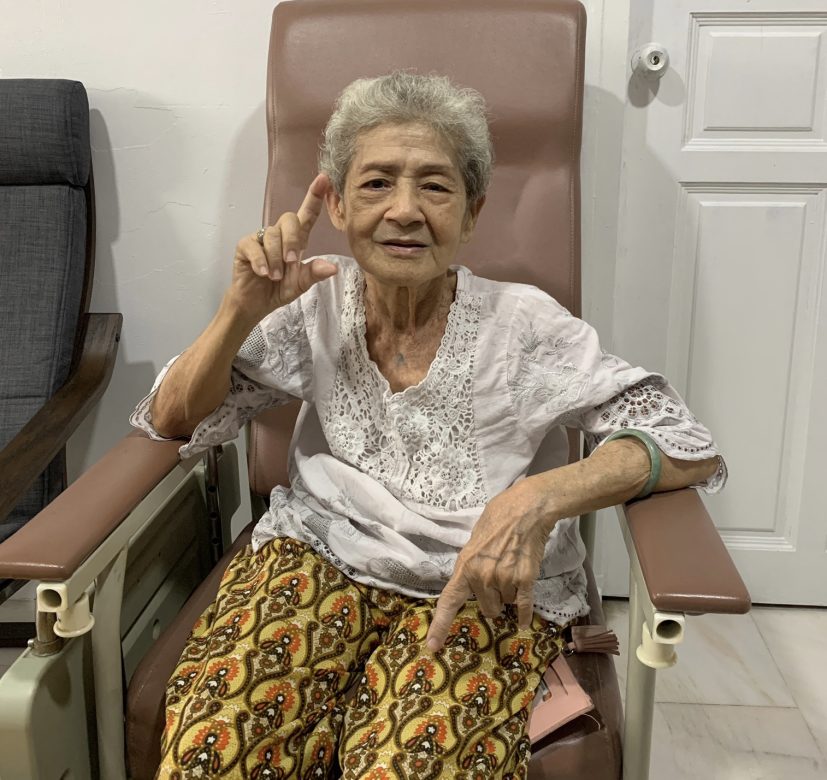 Those good times are beautiful memories for Madam Low. As the couple grew older, Madam Low found it increasingly difficult to look after her spouse. “I’ve always had a hunchback. When my husband had a fall around the age of 70, I had to help him get around the house,” she shares. Soon, that took a toll on her. Social workers came and advised that her husband should be admitted to a nursing home.

Her husband’s children from a previous marriage were notified and he was admitted to Kwong Wai Shiu Hospital where he could get the care he needed. Mdm Low would then travel all the way to Boon Keng where the hospital was, to visit her husband. She did that for the next 20 years before her husband passed away in 2021.

“Towards the end, my husband became a bit senile, and he could not always recognise me,” she laments with sorrow in her voice.

A few years back, Mdm Low was diagnosed with cancer but it went into remission after the tumour was removed. Things were well for a few years but in 2021, Madam Low found that her legs started to swell. After draining out the fluid in her legs and doing several tests, the doctor found a cancerous lump in Mdm Low’s brain.

He recommended that she undergo radiotherapy treatment to control the cancer cells. “I told the social workers that I can’t go to the hospital in a taxi every day—I don’t have that kind of money,” she relates. That was when the hospital reached out to CHC’s Cancer Care group for help.

Cancer Care is a Church Without Walls initiative led by Pastor Edmund Tay that reaches out to and supports cancer patients. The volunteers availed their time to bring Mdm Low to and from the hospital. Each round of treatment required 28 consecutive days of radiotherapy. This meant that for 28 days in a row, a two-person team—a driver and a helper—would bring Mdm Low from her home to the hospital for treatment and back.

As the Cancer Care volunteers accompanied her during the treatment, they also befriended her and offered practical help when she was home. Even after Mdm Low had completed her radiotherapy, the volunteers continued to visit her. Through genuine and consistent care, the volunteers brought the reality of Christ’s love into her life. Madam Low made a decision to accept Jesus as her Lord and Saviour.

She is grateful that a group of Christians came to help her during her time of need. After the radiotherapy treatment, the cancer cells are now under control. “The doctors told me not to worry because the lump is not growing any bigger. I’m also not feeling any discomfort now,” she shares.

“The people from City Harvest are really very nice. When my husband passed away, many of them came to the funeral and even gave us a love offering,” she shares.

Two months ago, Mdm Low suffered a bad fall. She was admitted to the hospital where she had hip surgery. Because she had no one to look after her at home, she had to stay in the community hospital for a prolonged period of time.

On the day of her 75th birthday, Pastor Edmund and another volunteer visited her with cakes and fruits. Their other mission that day was to water baptise Mdm Low. Mdm Low was eventually discharged in late November and is now recuperating at home. She goes back to the hospital for physiotherapy on weekends. While she wants to attend CHC’s services, she is often too tired to do so after her treatment. The Dialect Church staff and volunteers continue to reach out to her, praying that she would one day be well enough to join them in church.