CHCSA Brings Back The Christmas Cheer

After two years of the pandemic, CHCSA finally brings back the annual House Of Joy Christmas party, this year in two locations: Mountbatten and Tampines Greenweave. Covid made life difficult for people, but among the hardest-hit by the social isolation forced by the pandemic have been the elderly, particularly those living by themselves.

It was therefore with no small amount of joy that City Harvest Community Services Association brought back the popular Christmas Party to the residents of House of Joy, now not only in Mountbatten by in Tampines Greenweave too, where its second HOJ centre is located.

THE JOY OF SERVING

Our zone, headed by Pastor Tan Yah Lan, has been committing time to serve the beneficiaries of CHCSA when the opportunity arises. Pastor has been active in encouraging us to serve with CHCSA. Before the pandemic, some of the cell groups in our zone volunteered for a pilot project where we would carry out monthly evening visits to some of the HOJ Mountbatten beneficiaries.

So it was a return to serving for us when CHCSA brought back its annual Christmas Party for estates near HOJ. A group of us volunteered for the Mountbatten party which took place on 10 December at the second floor of Old Airport Road Food Centre.

Over 200 elderly persons enjoyed a morning of laughter, packed with snacks, craft and game booths, ukulele and fan dance performances, carolling, the popular Bingo game, and a lucky draw. The place was buzzing with excitement and there were wide smiles all around. Jerry Kow, 40, centre manager for HOJ Tampines shared that the team took two months to plan the event. The team’s desire was to bring back the Christmas cheer now that the many restrictions were no longer in place, as also, unlike last year, the elderly clients’ were now not so hesitant to attend large scale events.

“There was good response from our regular clients—they were so excited to buy tickets and gather their friends again,” he said. With the support of these HOJ regulars and other partners, the team sold about 80 tickets within the first week of publicity, and up till the day of the event, over 170 tickets were sold. Each ticket, which cost $5, came with a lucky draw stub and entitled the holder to lunch and other traditional snacks like muah chee and cup corn.

HOJ’s efforts in Mountbatten over the years has not gone unnoticed by residents. On the day of the party, the team realised they needed an additional electrical point, and approached a shopkeeper in the food centre to “rent” one from her at a price. To their surprise, the shopkeeper, known only as Alice, refused payment for the loan of her electrical point because her mother had been a beneficiary of HOJ. It was gratifying to know that the HOJ team have built a good reputation and relationships through their work on the ground.

Forty-nine volunteers like myself from HOJ and City Harvest Church were involved in the running of the party. Some managed the game booths and prepared the game props, while others manned photo booth and gave out drinks. The entertainment included a fan dance performance and lively ukulele session. With about 80 regular members aged 59 to 85, a group of 25 from the ukulele interest group Ageless Bridge performed at the party. The group was attending ukulele lessons twice a month at the Tampines Regional Library until the pandemic hit. Undeterred, they went online to practise via Zoom—some seniors took pains to learn how to navigate the platform just so they could continue with their ukulele practice. Now that Covid restrictions are lifted, the group has been invited to perform at various functions.

Ageless Bridge member and retiree Carol Lim, 66, shared, “Covid really brought us together. We’re just a group of seniors who enjoy the ukulele, and every performance allows us to sing and bond.” Their energetic ukulele performance was a hit with the elderly audience, who clapped and sang along to their medley of English, Mandarin and dialect songs. Mdm Chin Say Moei, 74, who had previously joined in activities organised by HOJ Mountbatten, attended the Christmas party with two of her friends and tried out all the game booths. “I really enjoyed myself, and I want to continue attending such activities till I can’t walk anymore!” she said.

City Harvest Church board member Keith Lim visited the party with his wife Mabel and joined in the fun. “I’ve never seen so many active and happy elderly, having such a good time,” he commented. “CHC is making a difference through its support for CHCSA and HOJ,  and I’m very blessed to see our members getting involved and serving here as well.”

Student and volunteer Daniel Teo, 17, found great joy in seeing how both volunteers and the elderly were smiling and laughing. “As part of the planning team, I thought some of the games were pretty challenging, but the seniors totally nailed them!”

The Christmas party is a time for many families to gather and have fun together with their elderly parents or grandparents. One of the grandchildren present was 15-year-old Koh Bee Geok, who attended the party with her 83-year-old grandmother Mdm Chua. Mdm Chua visits HOJ Mountbatten twice a week, and for her, Bingo was the highlight of the party. Bee Geok enjoyed the games. She said, “It’s my first time attending such an event with my grandma, and it’s really fun. I enjoyed myself very much. The game Catch The Duck was the hardest!” The highlight for many of the regular attendees is the lucky draw that ends the day; the prizes this year included an air fryer, bird’s nest and vouchers. What was even more exciting for the attendees was the presence of Mediacorp artiste Aileen Tan, who picked the winning numbers and presented the prizes. Mr Tan Chor Ing, 78 declared after collecting his prize, “I will let my wife have all the bird’s nest!”

THE TRUE MEANING OF CHRISTMAS

Volunteers and husband-and-wife Charles Chee and Jessie Phua, both 55, felt that the event was a meaningful way to engage the elderly in the neighbourhood, especially those who feel lonely during festive seasons. Jessie said, “All the elderly were very friendly, interacting with each other and playing games together. I was surprised when one aunty came and chatted with us about her activities before the pandemic.”

Charles agreed, “I was impressed by how the elderly would look out for each other—I’m inspired by them to would volunteer for future events.”

Daniel was likewise inspired. “Every elderly person was once youthful,” he noted. “Some may have been elites in various industries, and surely they lived a happy and exciting first half of their life. So for us who are younger, we should live out our best life by doing what we love and make lasting memories!” HOJ’s Christmas party is more than having fun and laughter—it is also an opportunity to demonstrate the love and hope of Jesus Christ. Keith said, “As we’re going to celebrate Christmas, House of Joy is practically manifesting the spiritual principle of bringing good tidings and goodwill to men. This is a practical expression of God’s love. This is what Christmas is about: Jesus bringing hope into the darkest moments. To me, House of Joy is a house of hope.”

Fellow board member Nicodemus Lim, who also attended the party, shared similar sentiments. “The party is a nice way to engage the elderly and bring the Christmas spirit. It’s not just about giving back, but connecting people. It was also great to see some grandchildren here. An event like this is precious for the elderly, and important in building relationships.” 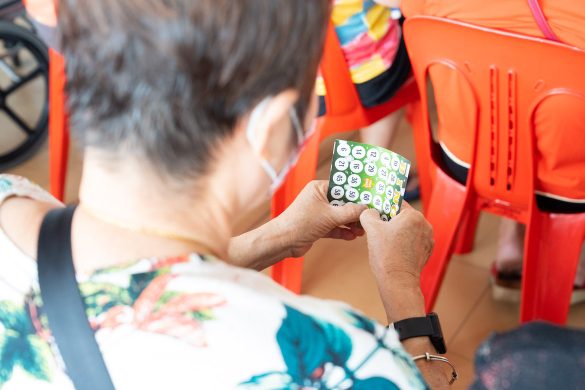