A Message To The Imperfectly Perfect Mum: Sun Ho

At last weekend’s Mother’s Day services, Pastor Sun Ho shared a stirring message dedicated to all the mothers in CHC, a timely reminder that they have the capacity to be the mothers that God has called each of them to be. Last weekend (May 9-10) was Mother’s Day. City Harvest Church’s executive pastor, Sun Ho began her message noting that while mothers have no difficulties loving their children, they often do not extend themselves that same love and grace.

“We are often the hardest on ourselves,” she said. “We’re constantly feeling that we’re not good enough, or we have not done enough.”

Pastor Sun shared that she too harboured doubts about her parenting abilities. Ever since a holiday job at a childcare centre drove her to quit after just three days, she had formed the belief that she was not good with children.

When her son Dayan was a baby, he was colicky and would often cry non-stop. Pastor Sun would be at her wits’ end trying to soothe him for hours to no avail. In those moments, she felt lost and a failure in her duties as a mother. Once, she even did the “unthinkable”: walking out of the bedroom and leaving Dayan to cry while she broke down in the kitchen, crying out to God about her inadequacies as a mother.

Another incident that Pastor Sun recounted was during a family beach vacation in Penang when Dayan was a young boy. While Pastor Sun clarified that she was not a Tiger Mom when it came to academics, she was insistent that Dayan learn to be bold and courageous. As such, when Dayan first expressed interest in, and at the last moment wanted to back out of going up on the parasail, his mother got very upset.

“I don’t know what came over me that day, but I was so upset that I scolded him,” she recalled. “I kept asking him why he changed his mind. When he said, ‘Mummy, I don’t want to do it anymore, it looks scary’, I got even angrier.”

Pastor Sun lectured Dayan about being courageous until he relented and agreed to go. Deciding that she had to lead by example, she accompanied Dayan on the parasailing adventure. Harnessed to the sail, she was instructed to hold tight to Dayan as he was still small and light. However, when unexpectedly strong gales caught the parasail, causing her to lose her grip on Dayan, fear gripped her and she went into a frenzy. On the other hand, Dayan, though afraid, held on tight to the handle and displayed remarkable calmness during the ordeal. When they got back onshore, Dayan did not blame his mother for the incident. Instead, he was just happy that they both made it back to the beach safely. 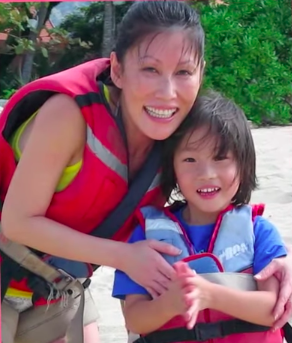 It was from that incident that the pastor realised that she should not have doubted Dayan’s bravery. Sometimes, she said, children are stronger than their mothers give them credit for.

HONOURING YOUR MOTHER DESPITE HER IMPERFECTIONS
“Whenever I remember incidents like this, I realise that as a mother, I really don’t have it together,” Pastor Sun admitted candidly. This was why she was especially humbled and overwhelmed that, during a recent “assessment of Mum”, Dayan expressed appreciation for her. He told her that she was one, hardworking and never gave up; two, a supportive mother; three, a friend to him.

Brimming with thankfulness, Pastor Sun told the church that she is grateful to God for doing what she and her husband could not, which was to keep Dayan’s heart intact and whole despite all the trials that their family has gone through.

“Every day, we are just leaning on God’s grace, trying to be the best mum we know how,” she said, cheering on the mothers listening. She reminded the congregation to always honour their mothers despite the imperfections and flaws that their mothers may have.  Exodus 20:12 reads, “Honor your father and your mother, so that you may live long in the land the LORD your God is giving you.” Pastor Sun thanked her own mum for raising five children without any external help and loving them despite all their antics and mistakes. Especially after having a child of her own, she is even more appreciative of her mother’s sacrifices over the years.

Referring to Proverbs 14:1, which reads, “The wise woman builds her house, but a foolish woman tears it down with her own hands” Pastor Sun preached that the men in the church would be wise if they were to build up their wives because it is their wives who build up their homes.

“Husbands, you need to remind her that she’s not just a mother, but she’s your lover, your playmate, your confidence, your best friend, your wife. Celebrate her, especially today, give her all the attention and affection,” she advised. Displays of affirmation and affection are powerful practices to adopt, even in front of the children, as it normalises such expressions of love within the family.

Finally, to the mothers in the church, she encouraged them saying that they have what it takes to be the mother that God has called them to be. “No other woman can do it better than you; God has entrusted your child to you. You are the perfect mother for your child,” Pastor Sun declared.

LESSONS LEARNT FROM NAOMI
From Naomi’s story, a mother who suffered a miscarriage, and eventually the loss of her husband and two sons, Pastor Sun illustrated how God can make something beautiful out of a believing, albeit struggling mother.

Picking up the story in Ruth 1:19, she related how Naomi, after losing her men, sending one daughter-in-law home, and being too old to remarry, returned to her hometown with her other daughter-in-law Ruth. Her her neighbours could barely recognise her: she had grown bitter and haggard from life’s unfortunate events. “Have you ever felt this way?” Pastor Sun asked. “You started full, but now you’re feeling empty on the inside. Naomi set out as a pleasant young girl, but she had now become a bitter person, convinced that life would never get better. But with the little that she had left in her, she focused on being a good mother-in-law to Ruth.”

Eventually, Ruth was married again to a good man named Boaz and blessed with a son. Naomi was also declared to have “gained a son” (Ruth 4:14-17). This boy went on to be the grandfather of the mighty King David. Furthermore, 28 generations later, Jesus, the Saviour of the world was born into this lineage. This was possible because Naomi did her best as a mother, first, to her two sons; then,  to her daughter-in-law, Ruth and finally, to Ruth’s son as a foster mother.

Her story is a reminder that God can always be trusted to know what He is doing, no matter how tough life seems. Even in the believer’s weakest moments, God’s strength always kicks in through the struggle and makes something beautiful out of the broken pieces.

In closing, Pastor Sun reminded mothers to enjoy their children and to remember to prioritise the little moments like laughing and praying with them. She assured the mothers in the church that they have what it takes to be the mother that God has called them to be, before ending the service with a beautiful worship session that drew the hearts of mothers in the congregation back to their first love and best Friend, Jesus.