Bliss And Blister: Aaron and Veronica’s Journey Through Infertility

Over a decade ago, Pastor Veronica Tang was told she couldn’t conceive—devastating news for someone who loves children. But she and her husband Aaron believed in the faithfulness of God. Today, they are parents to two beautiful girls.

Veronica Tang is a pastor in City Harvest Church leading a zone of young adults. She is also involved in CityFamilies, teaching, and counselling couples going through challenges in their married life. Looking at her cheerful demeanor and beautiful family, few would suspect that she once struggled with infertility, post-natal depression, and even guilt when her baby had a congenital heart condition.

More than 10 years ago, Pastor Veronica and her husband Aaron Chong found themselves unable to conceive. At the age of 18, she had been diagnosed with prolactinoma, a benign tumor that affects the level of the hormones in her body. She knew that she would have difficulties conceiving, but Pastor Veronica trusted that God would make a way for her.

“At every juncture of my life there seem to be setbacks, which, to me, is normal. But I love children, so having my own is very important to me. I adopted Hannah’s mindset when she was praying for a baby. In my heart I told God, please give me children, not just for my own satisfaction but I want to bring up His children. I want to help my children become more Christlike,” she reveals.

THE START OF A CHALLENGING JOURNEY

Two years into their marriage, Aaron and Pastor Veronica decided to seek treatment. The doctor suggested that they undergo intra-uterine insemination (IUI). Their first child Joy was conceived through the procedure.

“I had this misconception of God, that if I want to have something good, something else would be taken away from me. So I had a trust issue with God. When I finally overcame my depression through counselling, thankfully, I also broke through in this area and learned to trust in the Lord.”

Before Joy came into their life, Aaron’s attitude towards having children was casual: whether they had children or not didn’t really matter. But when Joy arrived, he started to realize how much he loved being a father.

“He is actually more affectionate towards the girls than I am,” Pastor Veronica laughs. Their journey to having another child proved even harder than the first. The couple went through four failed IUI procedures before deciding to try in-vitro fertilization (IVF) instead.

“I’m quite a relaxed person, but every time we went to KK Hospital for the procedure, I would pray,” Aaron says. “My prayer was always, ‘God, I put my trust in You. I trust that You will not disappoint me. Whatever the outcome is, I will still put my trust in You. We have fasted and been through so much, so God, please make it happen.’ And then I’d tell myself that I have prayed and I fasted, I can’t do anything else so I’ll leave the rest in the hands of God.” LEARNING THE FAITHFULNESS OF GOD

The procedures were emotionally draining for the couple.

“Aaron also went through a lot emotionally, even though he didn’t express it much. Each night before the procedures, he could not sleep. We cried a lot during that period of time,” Pastor Veronica recounts.

Their first IVF was successful for the Chongs but their ordeal was far from over. Pastor Veronica spotted throughout the pregancy and was put on bed rest for long periods of time so as not to endanger the baby.

“It was very difficult throughout the nine months. Many times, I thought I’d lost the baby,” she recalls.

“We named our second child Twinkle because, through that difficult journey, God reminded me that He is faithful. The twinkling of a star is not always bright and shiny—sometimes you can’t even see it—but the thing is, it is there. God reminded me that He is always faithful, just like the twinkle of the stars.” She adds that when she was in hospital, a kind nurse named Twinkle gave her much hope—that confirmed the name.

At 37 weeks of the pregnancy, the doctor told the couple that the amniotic fluid in the womb had reduced by half. On the next visit, Pastor Veronica was admitted immediately for labor induction.

“When I waiting to deliver the baby, I kept confessing that I would have a healthy baby. I must have typed that over 1,000 times on my phone,” she remembers.

When Twinkle was delivered, the couple thought that the worst was over. Even though the doctors had told them that they heard some heart murmurs, the couple was sure that it would not be a major health issue for Twinkle.

“Aaron and I were very confident, thinking that we had gone through so much already, God wouldn’t put us through something else. We knew in our hearts that God had been faithful, and we just needed to continue to claim His promises.”

However, just before they were discharged, they received the bad news that Twinkle had been born with a hole in her heart that was a cause for concern. “My mind immediately shut down when the doctor said that. I couldn’t listen anymore,” Pastor Veronica recalls.

“When we reached home, some well-meaning relatives came to me saying that it is God Who gives us children, and because I insisted on my own will and went for IVF, this happened to my baby and I had to accept it,” she shares. “That triggered me and I started blaming myself. I couldn’t imagine a future for Twinkle if she had a hole in her heart and it was all my fault.”

Pastor Veronica could not bring herself to carry her baby. Every time she looked at Twinkle, she would be overwhelmed with guilt.

“I feel very lousy about myself; Aaron was the one who was strong,” she says. “So I think even when he was sad, he would carry the baby, praying and confessing every day that Twinkle would be well.”

Two weeks after the bad news, a breakthrough came.

“It was raining heavily outside and there was a loud clap of thunder. I went over to Twinkle and hugged her tightly. At that moment, I heard the Lord say to me, ‘This is how much you care for her. It’s just thunder and you’re already so concerned for her. What about Me? I am her Father, wouldn’t I love her too? She is My child.’” 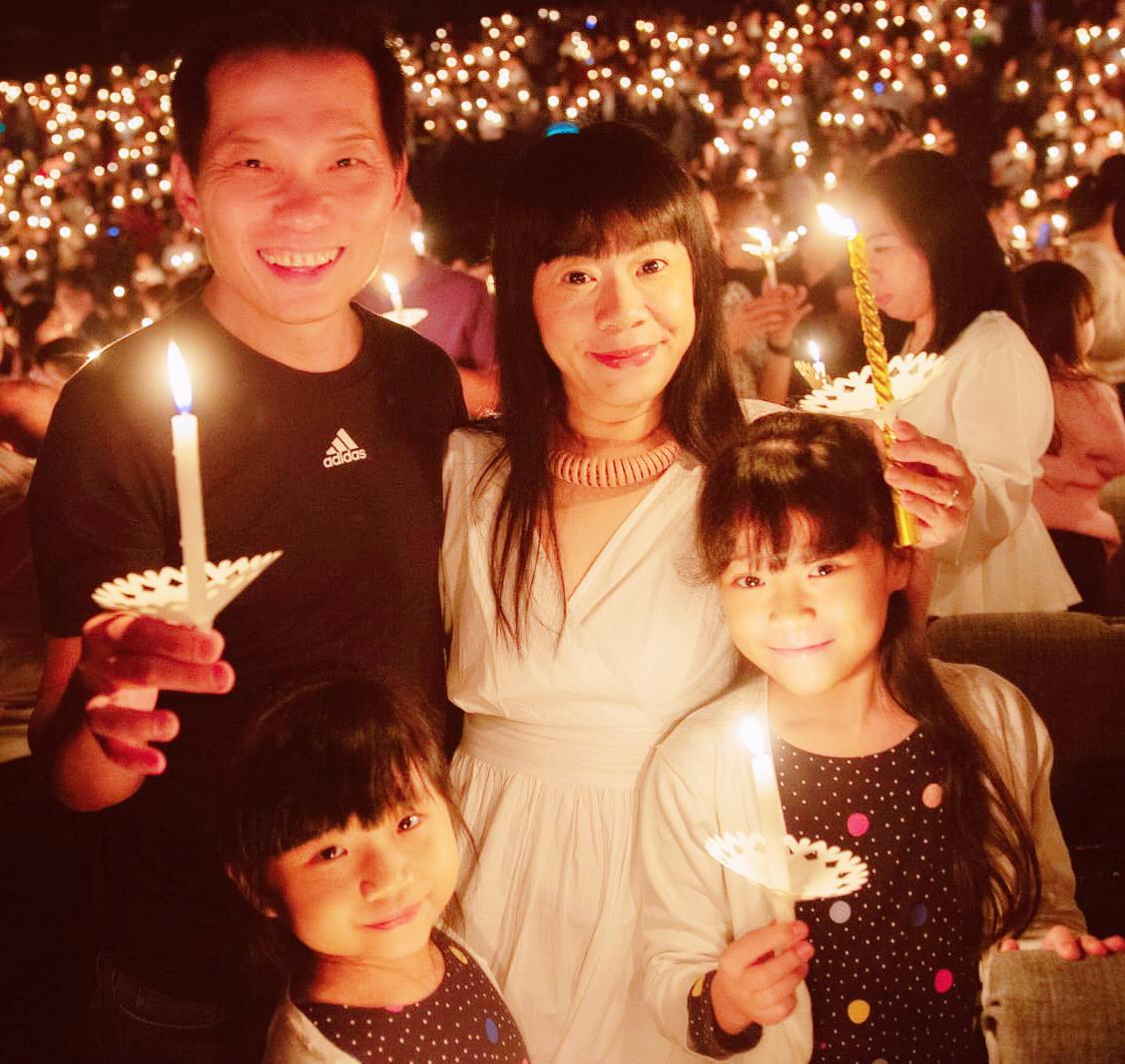 That rhema word brought Pastor Veronica to her knees. With the baby in her arms and tears in her eyes, she dedicated Twinkle to God. “Peace came into my heart that day. I would keep praying for her healing but even if she was not healed, I had the peace that God would take care of her.”

Thankfully, the good news came four months later. At the routine check-up, the doctors were surprised to find that Twinkle’s heart had healed completely. Today, Joy and Twinkle are 10 and 6, and both of them are healthy and happy children.

TAKE HEART IF YOU ARE WAITING TO CONCEIVE

In her journey of waiting for a baby, Pastor Veronica learned a lot. Two words of encouragement she would always give couples who have fertility issues are: one, communicate with each other, and two, seek help from others.

“In the beginning when we were still deciding if we should seek treatment to have a child, Aaron’s mindset was that if God gives us a child, that’s good. If not, why do we have to go through all this? We argued, and I always felt that I was the one doing everything,” Pastor Veronica recounts.

When Pastor Veronica teaches couples about family planning, she always advises husband and wife to communicate with each other. “Many times it seems like the woman is most affected by infertility, but the man is actually going through even more because he is the one who’s supposed to solve all the problems in the family. Mutual understanding is very important. And as a wife, it’s also important that we encourage our husband,” she shares.

“It was prayer and communication that brought Aaron and me through this journey, and I cannot emphasize enough the importance of prayer.” Pastor Veronica also explains that there is no shame in sharing the truth and seeking help from trusted friends when one, or both, are facing depression or difficult choices, such as assisted conception.

“There is nothing to be shameful about. If they need help, they must approach someone for advice—we sought advice from our pastor at that time. When a couple is going through problems, both husband and wife are too involved and stressed out to see the bigger picture. They need those around them to help them.

“When I was going through post-natal depression, I felt like shutting everyone out. But I had to tell myself to let Pastor Eileen (Toh) in, and that helped me a lot on my journey,” she reveals.

Pastor Veronica shares that if she could go back in time and give advice to herself 10 years ago, she would tell her to trust God.

“Trust God and don’t let your desire become your God. While I know what needs to be done, I also needed to hold on to God’s hand more tightly and to know Him more; to really know His heart for me and my family’s future more. If I had known all that, I might not have gone through so many heartaches and experienced disappointment in God. I would have been steadier and there would have been greater joy in me.”

How To Handle Stress And Anxiety